Every company has a chart that defines it.

The chart for Apple (AAPL 2.44%), for instance, would show iPhone sales -- their trend or the evolving share of revenue they account for. After all, the iPhone has made Apple the most valuable company in the world.

That's what a defining chart is. It reflects the core or unique quality that's most responsible for a company's success.

Few are more striking than Wal-Mart's (WMT -1.33%) defining chart. It compares the annual revenue of Wal-Mart to other large companies -- say, those on the S&P 500, which tracks the leading companies in the United States. 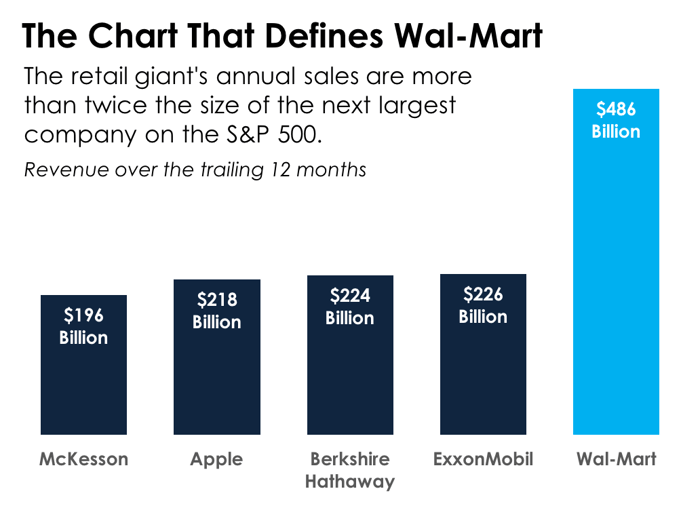 Despite the enormous size of these other companies, most of which have higher market caps than Wal-Mart, their annual revenues pale in comparison to the Arkansas-based retailer's.

Wal-Mart's revenue over the last 12 months adds up to $486 billion. That's more than twice Apple's total revenue -- which, not to belabor the point, is the most valuable company in America.

It's this stark contrast between sales and value that reflects Wal-Mart's core business model: Selling lots of stuff at everyday low prices.