Please ensure Javascript is enabled for purposes of website accessibility
Free Article Join Over 1 Million Premium Members And Get More In-Depth Stock Guidance and Research
By Palbir Nijjar - May 15, 2017 at 7:45PM

The company is up nearly 30% since exceeding analyst expectations for its first quarter results.

Shareholders of FireEye ( FEYE ) have been through tough times, to say the least. Though the stock has gained 30% since the company reported earnings earlier this month, it is still down over 80% from the all-time high it reached in Feb. 2014.

FireEye investors seem to finally have something to cheer about, but what's driving the optimism?

For starters, the results announced on May 2nd marked FireEye's third consecutive earnings beat with a net loss of $0.09 per share -- Wall Street analysts were expecting a loss of $0.26   per share. And in the past year, the company recorded a loss of $0.27 per share, a significant improvement from the $1.61 loss from the previous 12 month period.

Wall Street is coming around

Analysts have also begun to change their tune on the company. In March, Bank of America upgraded its rating on FireEye from "neutral" to "buy", raising its share price target from $13.50 to $18 per share. Goldman Sachs also raised its targets in March from $10 to $15, citing a faster transition than expected to a more profitable subscription model.

In addition to those upgrades, seven other Wall Street firms upped their price targets on FireEye, though their upgrades weren't announced until after the latest earnings call.

To Goldman Sachs' credit, over the past four years, the company has successfully transitioned to a subscription model. FireEye has been aggressively pursuing the more predictable, recurring revenue stream over the past year. 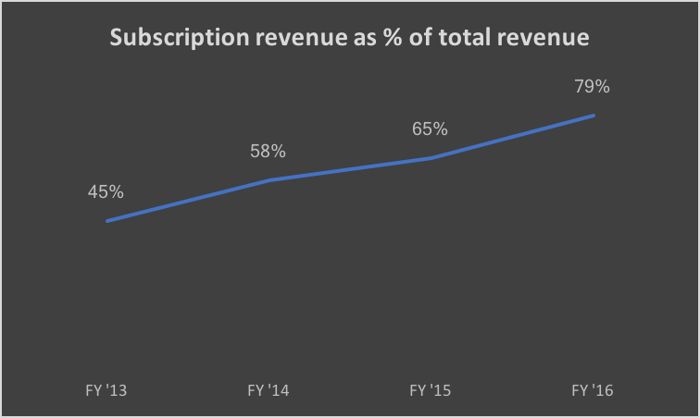 The company extended its momentum with subscriptions into the most recent quarter, ending March with subscription and services accounting for 86% of total revenue. That revenue also carries higher margins: 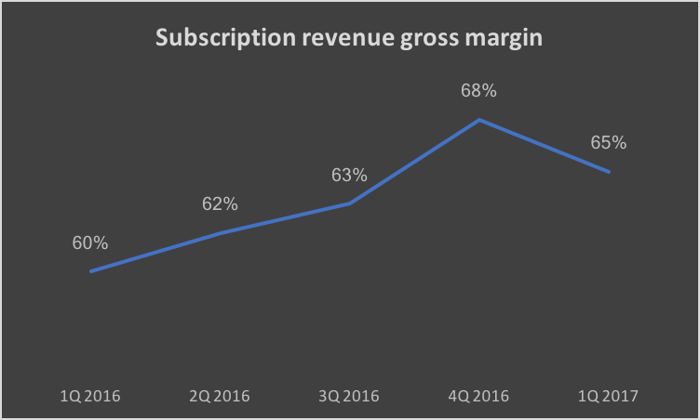 Management decisions are beginning to pay off

It has been a full year since current CEO Kevin Mandia took the reins at FireEye. Mandia originally joined the company as part of a $1 billion acquisition of Mandiant, a computer forensics company he founded in 2006. At the time of the changeover, Mandia sounded pretty confident in a smooth transition. Some notable quotes in a MarketWatch interview included:

Three months later, he announced 300 to 400 job cuts in an $80 million restructuring plan. The stock also struggled -- at one point falling as much as 35% after Mandia took the helm. A year later, he appears to be humbled, having recognized some of the struggles at the company, "How we do business was so deeply rooted in that appliance mindset, and we have to continue to evolve. ... [T]hat was the biggest thing that I didn't quite understand when taking the job, and we'll keep changing that over time."

Mandia's early decision to cut the workforce appears to be paying off as the company approaches profitability. An added focus to consolidate the product line should drive future growth. Its newest product, Helix, seeks to streamline security operations into one solution. The company launched Helix on the last day of the quarter ending in March and is seeing promising early results:

Even though we released Helix on the last day of the quarter, we closed Helix deals on that day in four different vertical markets, including an energy company and a leading apparel company. Two of these customers are brand-new logos to FireEye. The Helix deals drove incremental product sales as well, in both new and existing customers ... These incremental product purchases represent a substantial increase in our transaction sizes for those deals.

While Wall Street grows more optimistic and the transition to a subscription and service model gains steam, investors shouldn't assume it will all be uphill (for the stock) from here.

While FireEye beat earnings in its latest quarter, it had low hurdles to clear -- recall that it was expected to lose as much $0.26 per share. And in February, the company guided for first-quarter billings of $130 million to $150 million. Actual billings came in at $152.4 million -- down 18% year over year -- but analysts had previously projected billings of $186.9 million.

Operating losses came in at a hefty $72 million, while revenue increased a measly 3%. That's not the type of performance investors should be looking for in a company trading for 3.5 times sales.

Whether FireEye is at the beginning stages of a turnaround or if its recent performance is just a head fake remains to be seen. There are some positives to be taken from its latest report, and a strong start for Helix is encouraging. However, the company has a long way to go to show it can succeed in this highly competitive space.