Please ensure Javascript is enabled for purposes of website accessibility
Log In Help Join The Motley Fool
Free Article Join Over 1 Million Premium Members And Get More In-Depth Stock Guidance and Research
By Ashraf Eassa – Updated May 15, 2017 at 2:01PM

Apple's planning to go head to head with Amazon in this emerging product category.

Earlier this month, generally reliable KGI Securities analyst Ming-Chi Kuo issued a note to clients (via MacRumors) in which he said:

There is an over 50% chance that Apple [(AAPL -1.96%)] will announce its first home [artificial intelligence] product at WWDC in June and start selling in the [second half of 2017] in order to compete with the new Amazon [(AMZN -0.77%)] Echo models to be launched.

At the time, the analyst also said this device will "have excellent acoustics and computing power," pack an applications processor in the same league as either the A8 or the A9, and command a higher price than the Amazon Echo. 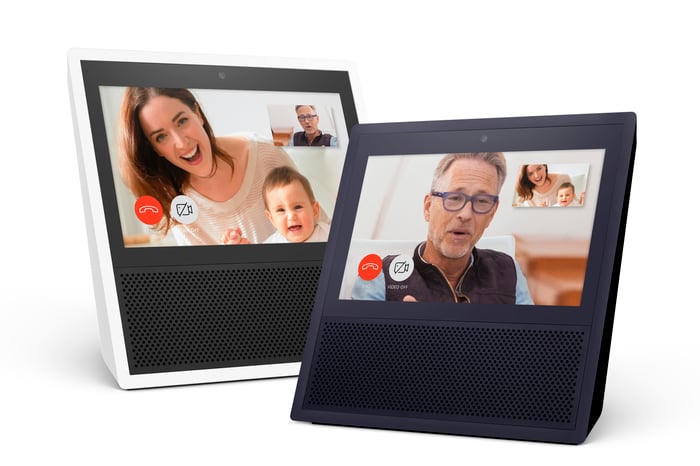 Kuo pegged the odds that the device would launch at Apple's World Wide Developers Conference in early June at "over 50%," and expects Apple to move "over 10 [million]" units of the device in its first year (this detail comes via 9to5Mac).

In a more recent note (also via MacRumors), Kuo added a final detail -- that it will be endowed with a touch screen.

Let's take a closer look at how this upcoming product could affect Apple's business.

Yet another new product category

It's extremely unlikely that Apple will come up with a new product category that will be anywhere near as successful as the iPhone. However, if it can come up with many reasonably successful new product categories that, in aggregate, can help drive solid revenue and profit growth (as well as hook people into its product ecosystem), that would be a solid way to build shareholder value.

If Apple prices this so-called "Siri Smart Speaker" at around $300 (the latest Amazon Echo Show, which includes a touchscreen, sells for $229.99) and if it can sell at least 10 million units per year, then that's a potential $3 billion in incremental annual revenue.

Again, in the context of Apple's gargantuan revenue base (its fiscal 2016 revenue came in at $215.64 billion), an additional $3 billion doesn't seem like much. However, in the context of the strategy noted above about many smaller growth opportunities aggregating into significant growth, this seems interesting enough.

And, expanding on a parenthetical point made earlier, Apple's entire business should benefit if it can bring in and retain customers into its ecosystem. The upcoming "Siri Smart Speaker" should be a good stand-alone product, but it should really show its full potential when used with other Apple products such as the iPhone/iPad/Apple Watch.

A compelling stand-alone product could boost the likelihood that a customer who doesn't already have, say, an iPhone, iPad, or a Mac will want to dive deeper into the Apple ecosystem to see what she or he might be missing.

Additionally, a product that shines when used with other Apple products could make it less desirable for current users to switch to competing products/software ecosystems. Indeed, Apple's tightly integrated ecosystem of products is widely viewed as a key competitive advantage, and to the extent that Apple can bolster said advantage, the better.