While the overall physical retail market has struggled, consumer-electronics sales have been booming, and you can largely thank Amazon.com (NASDAQ:AMZN) for that.

The online giant, which passed Wal-Mart as the No. 2 electronics retailer in 2016, was expected to pass Best Buy (NYSE:BBY) for the top spot, according to Quartz. To put Amazon's impact into perspective, the company accounted for 90% of the $5.6 billion growth the consumer-electronics industry in 2015, according to an analyst note from Deutsche Bank sent in June 2016.

That's an impressive feat for the online leader, but its success doesn't mean there's no room for other successful electronics retailers. Amazon is absolutely a must-buy in this space, but so are Best Buy and Apple (NASDAQ:AAPL). 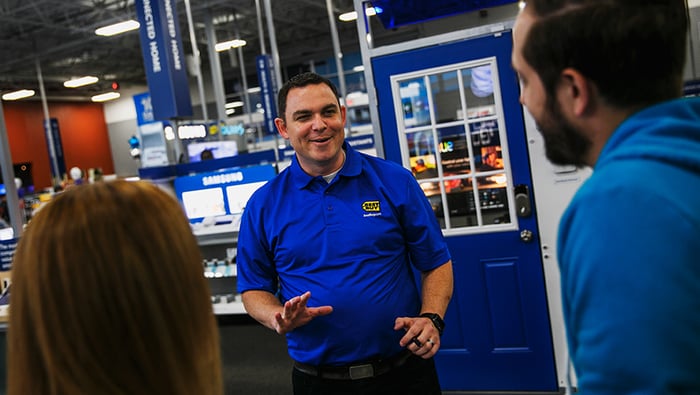 Best Buy is kind of the last man standing when it comes to traditional electronis retailers on a national level. Image source: Best Buy.

Best Buy has turned itself around

There were a number of years when it seemed Best Buy would join Circuit City and Nobody Beats the Wiz in the retail graveyard along with Crazy Eddie. Amazingly, however, CEO Hubert Joly has led the company back. In 2012, when he took the job, the electronics retailer lost $3.36 per share.

In its recently completed fiscal 2016, Best Buy reported diluted EPS of $3.74, up from $2.30 the previous year. The chain has steadily lost sales, but it has managed its expenses well and stopped what could have been a slide to oblivion by making major changes.

The biggest of the may be matching Amazon's prices. That stopped the practice of showrooming, where consumers did their research at a Best Buy, eating up resources, and then bought on Amazon. The bricks-and-mortar retailer has also improved its stores by making them destinations with partner store-within-a-store concepts from Apple, Microsoft, Samsung, and various others.

Amazon is the king

Calling Amazon an electronics retailer is a bit like describing Dwayne "The Rock" Johnson as a reality-TV producer. Yes, he does have that job title, but it only describes a small part of what he does, Similarly, Amazon is an electronics retailer -- the largest one in the world, as I noted -- but the company doesn't even break out the category when it reports earnings.

Amazon is a top electronics retailer because it's a top-everything retailer. The company, which grew sales by 23% year over year to $35.7 billion, is simply good at leveraging its audience to sell pretty much anything.

In electronics, however, Amazon has helped itself by creating its own products. Though the company doesn't releases sales figures in this area, either, it has achieved some success with its Fire tablet line, its Kindle e-readers, and Fire TV. Recently it has what appears to be a major hit with its Echo family of products, which contain its Alexa artificial-intelligence-powered voice-controlled assistant.

Apple has a lucrative niche

Again, Apple is certainly not an electronics retailer first, but it does run a chain of stores. Those stores, according to 2016 data from eMarketer, have the highest sales per square foot of any retail chain. In fact, the iPhone maker came in at $5,546 a square foot, dramatically ahead of second-place Murphy USA, and nearly double third-place Tiffany & Co.

The company generates sales that high because nearly everything it sells, aside from some cases, earbuds, and a few other items, costs more than $100. In addition, while Apple products are sold elsewhere, including Best Buy, the company's retail stores offer the Genius Bar, where consumers can make appointments to get technical help, receive training, and have broken products examined.

Apple currently has 495 retail locations globally, as well as its online store. CFO Luca Maestri provided some detail during the company's Q2 earnings call, which was transcribed by Seeking Alpha (registration required):

The company has smartly limited the amount of stores it opens to make each one more special but not have so few that consumers can't access them. Apple has a nearly perfect retail strategy where its stores support its products, while also keeping customers happy and generating a staggering amount of sales for their square footage.