Please ensure Javascript is enabled for purposes of website accessibility
Log In Help Join The Motley Fool
Free Article
Join Nearly 1 Million Premium Members And Get More In-Depth Stock Guidance and Research
By Daniel B. Kline – Updated May 16, 2017 at 3:59PM

The company has struggled, but its future may be better than many other retailers.

Macy's (M -0.54%) has been a high-profile victim of the problems facing many retailers.

The company has lost sales as more consumers turn to the internet, and its fiscal 2016 was a disappointment to investors. The company had entered the year optimistically, predicting full-year earnings per share (EPS) of $3.80 to $3.90, compared to $3.77 in fiscal 2015. That would have been a good number -- a relative triumph -- but after two negative revisions during the year, the actual number came in at $3.11.

It was a year of bad news for the retailer. It closed stores, which made it part of the general negative retail narrative along with a number of other chains that have been shrinking. What's different about Macy's, though, is that while some struggling retailers have either already gone bankrupt or appear like they might, the former retail shining star could still turn things around. 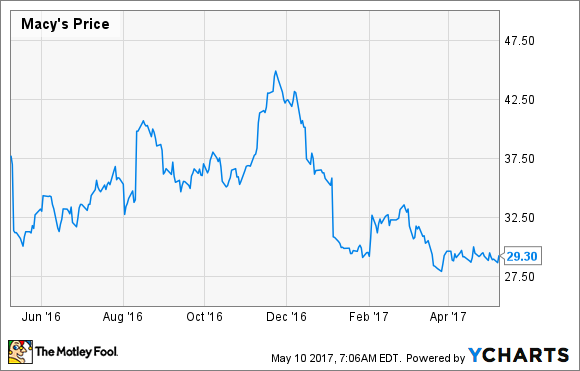 While some struggling retailers including Sears (SHLDQ) are trying to turn their business around while losing money every quarter, that's not the case with Macy's. The company, as was detailed above, still makes money, it's just not growing which tends to trouble the stock market. It's much easier to pivot a business that's profitable than to make changes at one losing money because the Macy's, unlike many of its rivals, actually has cash to fund new efforts.

Macy's has been selling some of its real estate and closing money-losing stores. Image source: Macy's.

The company can generate more cash

Macy's has been strategically selling some of its real estate portfolio in order to free up cash. Unlike Sears which is doing the same thing in order to pay its bills and keep the lights on Macy's is doing so proactively to focus on its core business. The company has not set a timetable, but is working with "its strategic partner, Brookfield Asset Management, on approximately 50 identified assets," according to its Q4 earnings release. In some, if not many, cases this will not involve selling the properties, but redeveloping them for a variety of uses while maintaining a store presence.

There is a new CEO

Macy's President Jeff Gennette became CEO on March 17, taking over for Terry Lundgren who became executive chairman of the company. Having a new leader could bring the company a new energy, and while Gennette has a long history with Macy's, he has also worked for other retailers including FAO Schwartz and Broadway Stores.

While most focus has gone to the stores Macy's has closed, the chain is also opening new locations as well. The company plans to open Macy's stores in Westfield Century City, Los Angeles, CA, and Fashion Place, Murray, UT, as well as approximately 30 additional Bluemercury locations and approximately 30 Macy's Backstage locations inside Macy's stores, according to the Q4 earnings release. The chain has also announced plans for new Bloomingdale's locations in 2019 as well as multiple international Macy's and Bloomingdale's under a licensing agreement overseas in the next two years.

Macy's closed 68 stores in 2017, as part of a 100-store closure plan it began in 2016. The moves got rid of stores that were losing money or where the company expected they could not grow beyond breakeven. The moves were expected to "generate annual expense savings of approximately $550 million, beginning in 2017, enabling the company to invest an additional $250 million in growing the digital business, store-related growth strategies, Bluemercury, Macy's Backstage and China," according to the company.

During successful times retail chains, like any other business, tend to add management layers that they may not need. In 2016 Macy's made an effort to shed itself of some of that bloat and underwent what former CEO Lundgren called "a major restructuring," in the Q4 earnings call, which was transcribed by Seeking Alpha (registration required).

We "concluded a significant reduction in layers of management in the central organization and improvements in the field of store management structures," he said. "These were big changes for us. I'm happy to see that our organization is settling in and learning to work with leaner teams and faster processes."

Because Macy's makes money, has shed its least-valuable stores, and has cut some of its overhead, it could be a target for a buyout from a company looking to take it private. Were that to happen (and some private equity firms have at least considered the possibility) it would be a boon for shareholders who would get a premium, probably a significant one, on the value of their shares.

2 Dirt Cheap Stocks That Could Skyrocket
409%