Please ensure Javascript is enabled for purposes of website accessibility
Log In Help Join The Motley Fool
Free Article Join Over 1 Million Premium Members And Get More In-Depth Stock Guidance and Research
By Maxx Chatsko - Updated May 16, 2017 at 12:20PM

Already one of the nation's largest ethanol producers, Green Plains is expanding in other bioproducts markets with great growth potential.

It wasn't that long ago that Green Plains (GPRE -4.58%) was called Green Plains Renewable Energy. The last two letters in the company's ticker still bear witness to that former identity. The previous name made sense, considering the company was one of the nation's largest ethanol producers and fully dedicated to renewable-fuel production. By that logic, the new, condensed name also makes perfect sense.

While today Green Plains is still a major player in renewable fuels -- the second largest owner of consolidated ethanol facilities in the United States, according to management -- its best growth opportunities may reside in markets that are only indirectly related to ethanol production. Shares have performed well in recent years, but at a market cap of just $1 billion, there's plenty of potential left for Green Plains to be a great growth stock. 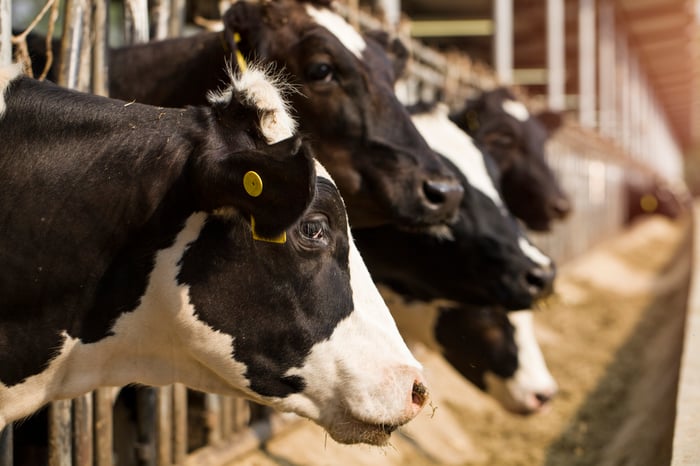 Each business segment -- ethanol, agribusiness and energy, and food and ingredients -- has significant growth opportunities available. At first pass, it may seem surprising that ethanol is included. After all, ethanol production comprised 70% of all revenue in the first quarter of this year. But there are multiple catalysts supporting continued growth for the segment.

First, consider that for the past six months American ethanol producers have been cranking out record volumes of exports as global demand for low-cost renewable fuel has soared. The trend appears to have substantial staying power, which is great news for leading producers. Green Plains stated that exports accounted for 20% of all ethanol production in the first quarter of 2017. How far can the company grow its export volumes?

Well, maybe quite a bit, especially considering that it's utilizing a near-record low amount of available production capacity. The relationship is a bit ironic. Green Plains is achieving record amounts of production each quarter while using decreasing amounts of available production capacity. That's due to a steady flow of acquisitions and capacity expansions. Consider that the first quarter of 2017 was the third straight quarter in which ethanol production exceeded 300 million gallons -- a level never before achieved -- but also the second straight quarter in which utilization rates decreased. 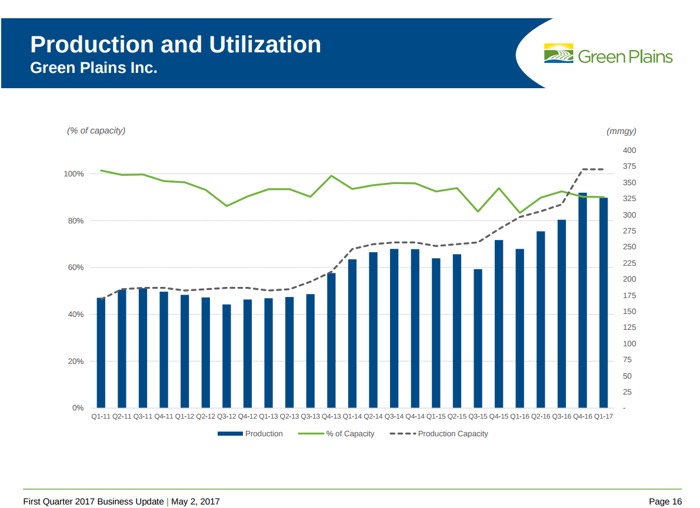 The possibility to continue growing the largest part of the business demonstrates that Green Plains has growth-stock potential. The possibility to achieve even higher growth is hidden in plain sight in the food and ingredients segment. Despite representing just 11% of total revenue in the first quarter of 2017, the business contributed 55% of total operating income. What's the secret? The segment is powered by two fast-growing interests: vinegar and cattle feed.

In the fourth quarter of 2016, Green Plains acquired Fleischmann's Vinegar, the world's largest producer and marketer of food-grade vinegar. Why vinegar? The largest cost in vinegar production is food-grade ethanol -- which certainly isn't in short supply at the company. The strategic move provided an immediate opportunity to grow revenue and anchor the performance of the segment. In fact, in the most recent quarter, segment revenue grew 67% from the year-ago period. At $98 million in sales, the food and ingredients business should have no trouble becoming the company's third segment with at least $100 million in quarterly revenue.

In addition to vinegar, Green Plains has made an overnight push to become a leading cattle feeder. In the past two months, the company acquired three cattle feedlots in two separate transactions that immediately made it the fourth largest cattle feeder in the United States. Why cattle feed? One of the largest downstream applications for corn byproducts from ethanol production is animal feed -- which certainly isn't in short supply at the company. The latest acquisition boosted the company's cattle holdings to 258,000 head, up from just 73,000 at the start of the first quarter of 2017. It also includes a multi-year offtake agreement with Cargill Meat Solutions.

I think investors should be fully confident that Green Plains will be a great growth stock in the years to come. The ethanol business provides significant cash flow and earnings potential, which can fuel future acquisitions, in addition to a powerful network of raw materials and distribution networks for follow-on segments. Meanwhile, the food and ingredients segment provides significant potential for revenue and earnings growth. If you're looking for amazing growth for the long-term, then look no further than this $1 billion company flying under the radar.