Please ensure Javascript is enabled for purposes of website accessibility
Free Article Join Over 1 Million Premium Members And Get More In-Depth Stock Guidance and Research
By Reuben Gregg Brewer - May 16, 2017 at 11:13AM

Hecla Mining is focused on precious metals, in an even split -- but there's some other stuff thrown in, too.

Precious metals company Hecla Mining Company ( HL -1.07% ) is focused on digging silver and gold out of the ground. But that's not all this relatively small miner does, with the zinc and lead it also mines giving it more exposure to commodities that are driven by industrial needs, as opposed to depending merely on investors' forecasts for the broader economic future. Here's what you need to know about how Hecla Mining Company makes most of its money.

There's no getting around the fact that Hecla Mining makes most of its money from mining for silver and gold. In 2016 each of these two precious metals made up 39% of its top line. Of course the combined figure -- nearly 80% as of the latest annual report -- will fluctuate with the price of those two commodities, but to a vast degree gold and silver are the driving force behind Hecla Mining. 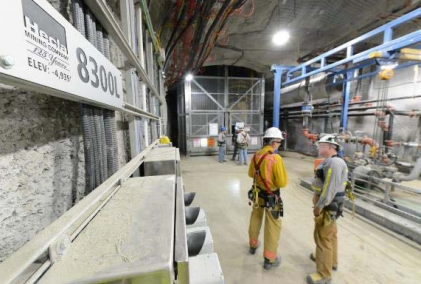 Nevertheless, there are some interesting things to consider here. For example, the main drivers for gold demand are jewelry making and investors looking to gold as a store of wealth in times of uncertainty. According to the World Gold Council, roughly 52% of gold demand came from the jewelry sector in 2016, 29% from bullion, coins, and exchange-traded funds, and 11% from central banks around the world. Just under 8% of gold was used in industries ranging from technology to dentistry.

Silver has a broader consumer base that leads to a very different demand profile. For example, according to the Silver Institute, jewelry accounted for around 20% of silver demand in 2015, coins made up around 25%, and silverware required 5%. The remaining 50% (or so) of demand came from industrial consumption ranging from electronics (itself around 20% of total silver demand) to photography. That's a very different use profile from gold's.

And that's why the lead and zinc that Hecla also mines are so important to consider here. Lead accounted for around 9% of revenue last year, and zinc brought in 13%. Although that's 22% combined, it's still a small proportion relative to precious metals overall. However, zinc and lead aren't stores of wealth or used materially in the jewelry trade. They are predominantly industrial materials used to strengthen other metals and make metal alloys (zinc is an important input in the steelmaking process, for example), or in things like batteries (lead). 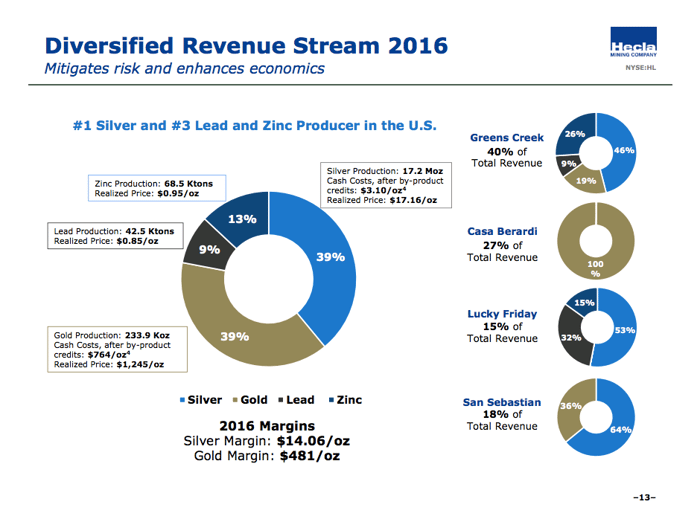 So, with a little back-of-the-envelope math, you see that roughly 45% of Hecla's sales are tied in some way to industrial demand (nearly 47% if you count silverware as industrial demand). That will ebb and flow over time with production shifts and commodity prices (gold, for example, was a larger portion of sales in the first quarter), but it's an important figure to keep in the back of your mind since it means investor sentiment is important to Hecla's top and bottom lines, but not the only factor to consider.

Essentially, if you own Hecla, you are branching beyond the fear factor that often drives precious metals' prices higher and lower. And a key piece of that is the 22% of the top line that comes from zinc and lead. Each metal alone may seem like an afterthought, but when looked at in the context of their demand drivers, they are important because of their interplay with the demand profile of silver.

Not always what it seems

There's no question that Hecla Mining makes most of its money from mining precious metals. The prices of silver and gold will definitely be the most important factors you want to focus on here. But when you dig a little further, you'll see that end-market demand for all of the metals that Hecla mines (gold, silver, zinc, and lead) is slightly different than you might expect. And that adds a level of diversification to Hecla's business that you may not have considered before.

Why Hecla Mining Stock Rocketed 52% in May

Why Miners Hecla, Endeavour Silver, Harmony Gold, and Coeur Rose as Much as 17% Today