For quite a few years now, graphics specialist NVIDIA (NASDAQ:NVDA) has focused on building extremely energy-efficient graphics processors. The reasoning behind chasing efficiency is simple: For a fixed-power envelope (and, in the real world, there's no such thing as "power unconstrained"), a more energy-efficient processor will ultimately be a faster processor. 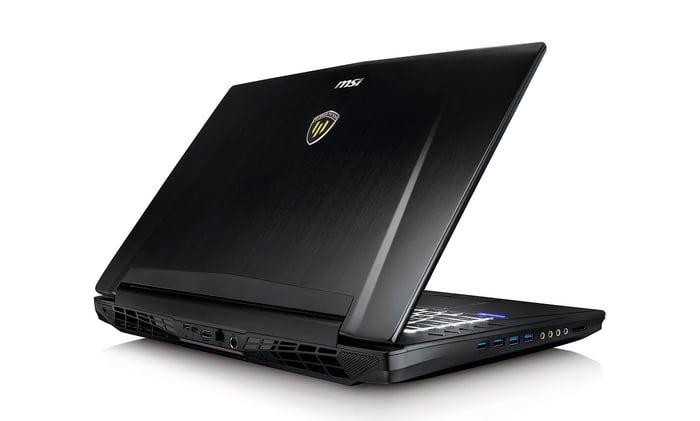 It's clear that the gaming notebook market has been growing (NVIDIA has talked in the past about the growth opportunity that this segment offers), but only recently at the company's financial analyst day did it put out some hard numbers about the growth rate, as well as the absolute shipment volumes, of gaming-oriented notebook computers.

From rounding error to rock-star 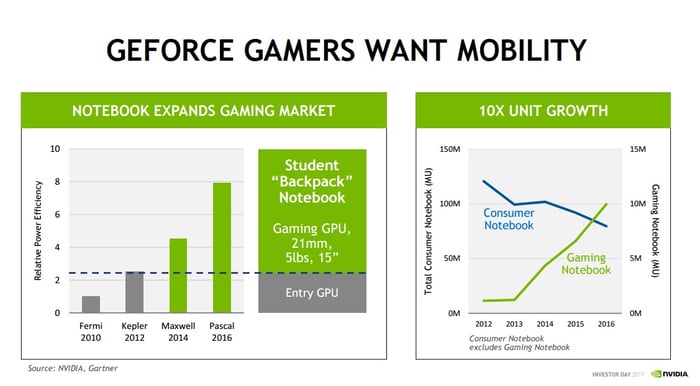 On the right, NVIDIA shows the trend in gaming notebook sales beginning in 2012. In 2012 and 2013, sales of gaming notebooks were minimal -- seemingly on the order of a million units shipped annually (at least that's what NVIDIA's claim of "10X unit growth" implies). The data shows that a massive surge of growth happened beginning in 2013, which continued through 2016 (the most recent full-year that NVIDIA has data for; 2017 is obviously not over yet).

Indeed, per the company, gaming notebook sales came in at 10 million units in 2016 -- a substantial increase in just four years.

It's clear that the work that NVIDIA has done in boosting the energy efficiency of its graphics processors has allowed it to bring robust levels of gaming performance to attractive-enough form factors to help gaming notebooks go from "niche product" to a reasonably mainstream gaming platform option.

Is this a net positive for NVIDIA?

There are several potential scenarios to consider with respect to the impact that the rise of gaming notebooks should have on NVIDIA's business.

However, there are other cases to consider that probably drive upside for the company.

For example, there are people who simply don't want desktop computers -- they've been using laptops for a while and appreciate the portability. Said customers may have simply chosen not to participate in PC gaming, either by not playing games at all or by using other gaming-specific platforms like game consoles (NVIDIA isn't in either the Xbox or PlayStation).

If these potential customers are offered notebook options with powerful NVIDIA graphics in a reasonable form factor (these individuals probably don't want something that's excessively bulky), then they could opt for such systems the next time they're in the market. That would increase NVIDIA's total addressable market.

Additionally, there are those customers that, if possible, would opt to have both a gaming-specific desktop computer as well as a notebook computer with solid gaming capabilities. For example, gamers who travel often and want to be able to game on the go, as well as those who like to game in social settings (think LAN parties), may appreciate having both a powerful gaming desktop as well as a reasonably fast gaming laptop.

All told, the growth in gaming notebooks probably does what NVIDIA says it does -- expands the gaming market.