Some call it the "Retail Apocalypse" and blame the rise of the internet, while others see the growing number of retail bankruptcies as a sort of market correction for chains not built to compete in 2017. However you view it, the number of retailer casualties has been piling up. In fact, through the first three months of 2017, nine retailers sought bankruptcy protection, according to CNBC. That matches the total number of retail bankruptcies in 2016 and puts the year on pace to tie 2009's record, when 18 chains filed for bankruptcy protection, according to CNBC.

Those numbers have continued to grow in the second quarter of 2017 with Rue21, Payless, and Bebe filing in April. And, after the recent round of disappointing earnings news reported by many retailers, there's no reason to believe the second half of they year won't continue the trend. 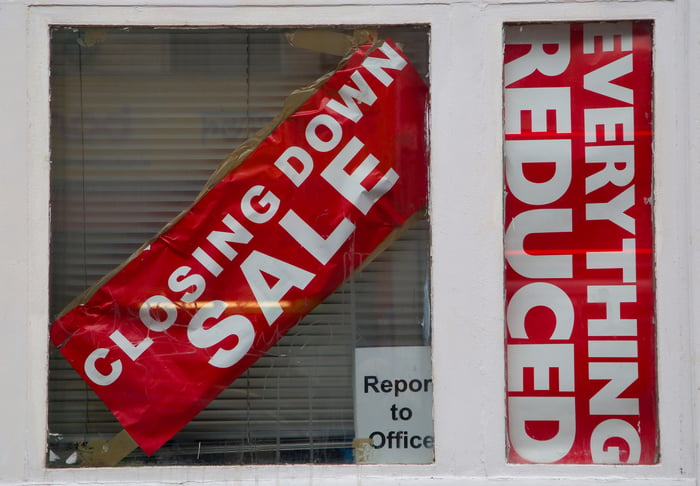 How bad could this get?

Rising interest rates present further problems for distressed retailers, making it harder and more expensive to raise needed capital. That could be the tipping point that sends some of the 19 companies on Moody's Investor's Service March list of distressed retailers (which includes Rue21 and Payless, which have already filed for bankruptcy protection) into bankruptcy.

Those companies reportedly had over $3.7 billion in debt that matures over the next five years with about 30% of it due by the end of next year. As sales at the chains, which include well-known names like Sears Holdings (NASDAQ:SHLDQ), David's Bridal, and Gymboree, continue to fall, rising interest rates could make it harder to refinance and push debt out.

Which areas could be hit hardest?

So far, apparel players, especially ones targeting younger shoppers, have been the hardest hit. In addition to Rue21, The Limited, Wet Seal, and BCBG Max Azria, have all filed for bankruptcy protection this year.

Going forward, however, apparel chains have only the third biggest risk of defaulting on their debt. behind electronics retailers, and department stores, which have the highest risk, according to Bloomberg.

Department stores may be struggling the most visibly, with Sears Holdings teetering on the edge of extinction, and J.C. Penney (OTC:JCPN.Q), and Macy's (NYSE:M) struggling. Of those three, only Sears appears headed toward bankruptcy protection in the near future, but the other two are increasingly vulnerable if current operating conditions worsen.

In addition to the bankrupt players in apparel space listed above, the entire category could be negatively impacted by the woes facing department stores. If a mall loses an anchor store like Sears, J.C. Penney, or Macy's, that impacts traffic to the whole shopping center. That could create a sort of domino effect, drawing down customer counts across an entire mall.

What's next for retail?

More chains are going to go out of business and close more locations. In addition, the loss of so many chains, and the shrinking of others will cause some shopping malls to close or contract.

For retailers to survive, they will need to find models that give consumers a reason to visit their stores. Both J.C. Penney and Macy's have starting doing that by integrating store-within-a-store concepts, and integrating the online and real-world shopping experience.

What's very clear is that few brick-and-mortar retailers are immune and that for many, things will get worse before they stabilize. There's no one blueprint for competing in this new reality where consumers have much less reason to leave their house. Competing in that marketplace will require a major pivot from many traditional retailers, and some won't be able to make that happen.