Last quarter, Companhia de Saneamento Basico do Estado de Sao Paulo (NYSE:SBS) -- more commonly known as Sabesp -- continued a streak of improving earnings results as drought conditions and foreign exchange problems became less of a factor. This most recent quarter was a continuation of that as the company posted growing top- and bottom-line results.

Here's a quick look at the company's most recent results and what investors can expect in the future. 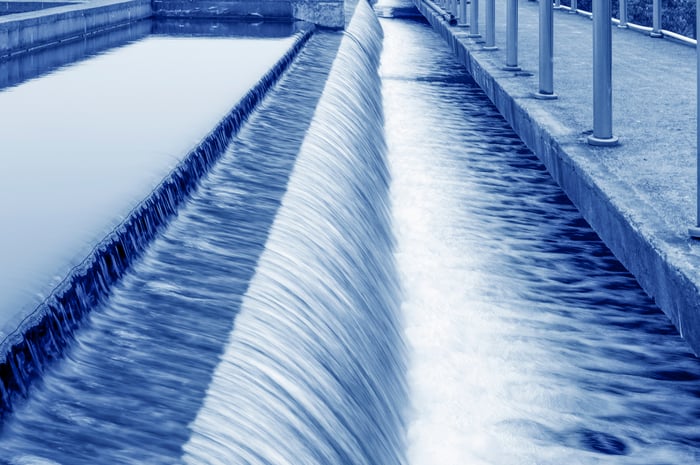 When it comes to Sabesp's results, probably the more important number to look at here is adjusted EBITDA even though it isn't a generally accepted accounting principles (GAAP) metric. The reason this one is important this time around is it removes all financial related costs or gains. This quarter's adjusted EBITDA results were much better as the company no longer needs to pay out customers as part of its Water Consumption Reduction Incentive Program that was necessary when the Sao Paolo region was amid a severe drought. During the first quarter of 2016, more than 30% of Sabesp's customers received a 30% bonus on their bills for reduced water consumption.

The line item that makes net income results look less robust than EBITDA was foreign currency related. This time last year, Sabesp realized a one-time foreign exchange gain of $141 million related to the value of its debts not denominated in local currency. As it stands today, 47% of Sabesp's outstanding debt is denominated in foreign currency. This can have drastic impacts on bottom-line results because all of Sabesp's revenue and operations are in local currency, so there are no foreign currency revenues to offset those debt value fluctuations.

Sabesp is in a much better position both operationally and financially than it was just a few years ago. Better inflows from an OK rainy season, fewer payouts for consumption reduction incentives, and overall growth of its water and sewer businesses have all played their part in improving Sabesp's net income results. What's even more promising is that the company's balance sheet is looking better because management has committed to a $4.45 billion capital spending plan over the next five years to improve water supply, increase total water and sewer collection, and improve wastewater treatment.

The one variable when it comes to Sabesp that investors have no control over is foreign exchange rates and the impact it has on the finances of the company. While Sabesp has benefited in recent quarters from a strengthening real, much of that has been wiped out by the recent bribery scandal. One way to make this less of a problem in the future would be to reduce its exposure to foreign currency-denominated debt. If it could do that, then it could make exchange rate fluctuations a non-issue for the business -- although for U.S.-based investors, it will have an impact on dividend payments.