Please ensure Javascript is enabled for purposes of website accessibility
Log In Help Join The Motley Fool
Free Article Join Over 1 Million Premium Members And Get More In-Depth Stock Guidance and Research
By Maxx Chatsko - May 19, 2017 at 4:08PM

The renewable fuels leader is executing its long-term strategy -- and more improvements are around the corner in 2017.

The company's relatively dominant market position has not translated into commensurate success for Pacific Ethanol (ALTO -1.03%) investors. Sure, the stock is up 67% in the last year, but the company is valued at just $300 million. That's well below book value and fails to account for value created from a major debt restructuring agreement announced at the end of 2016. The deal will save $13 million, or $0.31 per share, in annual interest expenses and operating costs. By comparison, the company posted net income of $148,000 last year.

The $300 million valuation also fails to account for strategic value-building initiatives already underway that could save millions more in annual operating costs while simultaneously increasing ethanol production yields and allowing production of high-value cellulosic ethanol. The disconnect between the current market cap and demonstrated progress leads to one important question: Why is no one talking about Pacific Ethanol stock? 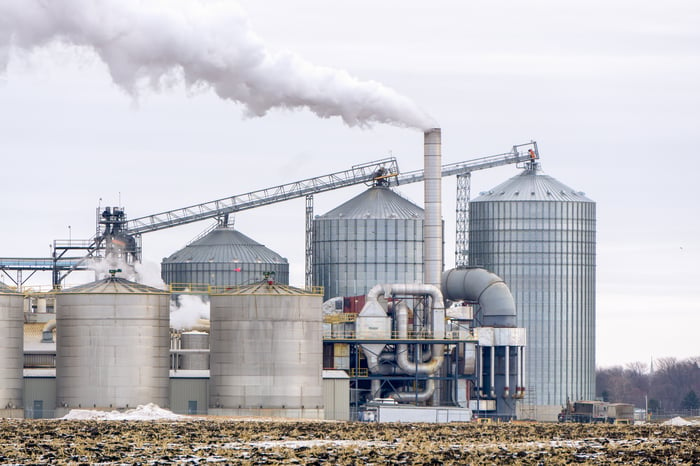 Profits on the way

The simple argument for Pacific Ethanol stock focuses on its relatively dominant position in the industry. In the first quarter of 2017, approximately 1 out of every 18 gallons of ethanol produced in the United States passed through the company's distribution network, with half produced internally and the other half coming from third-party vendors. That's no small feat considering the country will produce roughly 16 billion gallons of ethanol in 2017.

The nuanced argument is a bit more complicated. Renewable fuels producers must navigate obstacles out of their control, such as regulatory issues (which have weighed heavily on the stock year to date) and selling prices, while doing their best to capitalize on opportunities within reach, such as exports (setting new volume records each month) and cost-saving process upgrades.

The good news is that Pacific Ethanol is doing its best to achieve growth in a messy world. The current strategy focuses on two goals:

Management has done a pretty good job executing against the first goal in recent years. Acquisitions have greatly increased production capacity, while investments in the fuel distribution network have grown third-party throughput volumes. The trend in the table below should continue in 2017. In the first quarter of this year, gallons sold increased 9% compared to the year-ago period.

These sales volumes increases have netted the company a solid increase in the bottom line. Last year Pacific Ethanol reported gross profit of $51.8 million, a sharp increase from $7.4 million in the prior year.

Of course, what happens in between the top and bottom lines is what really matters for investors -- but management is working on executing against the second group of goals in its strategic focus. That's good news because, historically speaking, the company has not been very good at turning revenue into profits. Things have been quickly improving, however. Last year the ethanol leader achieved net income of $148,000, which is a heck of a lot better than the net loss of $20 million from 2015.

Profits should continue to improve in subsequent quarters. As mentioned above, a debt restructuring agreement announced last December will save $8 million per year in interest expenses. That's the equivalent of $0.19 per share -- and it has already made a positive contribution to the company's cash position, which grew $5.1 million without outside funding during the opening quarter of the year.

But that's just one part of the strategy to expand margins. Here's a quick rundown of other cost-saving initiatives that will be completed in the next year or so:

The expected contributions from these value-building and cost-saving initiatives tally up to $20 million annually, or $0.46 per share. When combined with profit contributions from a growing top line, the net income potential could be significant for an ethanol producer of Pacific Ethanol's size.

There's no arguing that the company has successfully reached its stated goals of expanding ethanol sales volumes in recent years. Meanwhile, the debt restructuring agreement announced last December removed the biggest cloud of uncertainty hanging over the stock and significantly reduced expenses. Despite the progress, no one seems to be talking about Pacific Ethanol stock. But if management successfully executes its margin expansion goals, that may not last much longer.