Free shipping has become an expected perk in many cases when consumers shop online.

The challenge for retailers, of course, is to deliver items for free without taking too big a hit while doing so. To make that happen, companies like Target (NYSE:TGT), Wal-Mart (NYSE:WMT), and Amazon.com (NASDAQ:AMZN) all set a minimum order threshold for a customer to qualify for free shipping.

But while these brands offer it in some form, how they define the concept varies. So when it comes to shopping with these major retailers, it is important to understand where each company sets its order threshold to qualify for free shipping and when customers can actually expect their delivery. 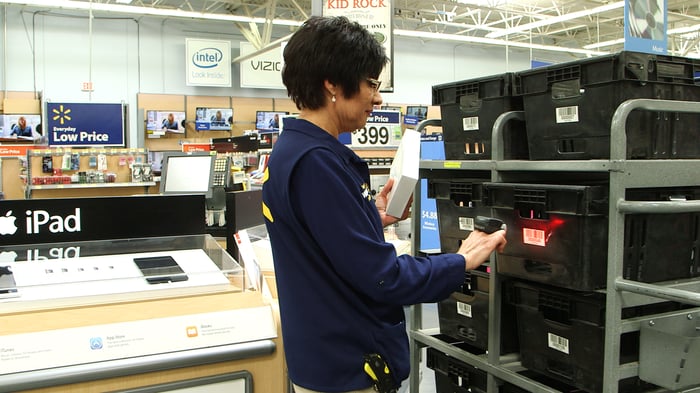 Wal-Mart is using its stores to ship some digital orders. Image source: Wal-Mart.

What does each company offer?

Amazon recently lowered its minimum order size for free shipping from $35 of eligible items to $25. That said, shoppers may not like that the e-commerce leader takes five to eight business days to deliver your order. By today's standards, that is slow -- indeed the slowest of the three, arguably -- but that may be intentional. Amazon would prefer to drive consumers to its $99-per-year Prime membership, which comes with free, two-day shipping and even Sunday delivery in many markets.

As it turns out, the estimated 65 million Prime members in the U.S. spend "on average about $1,200 per year, compared with about $600 per year for non-member customers," according to a November report from Consumer Intelligence Research Partners.

Target's deal, on the other hand, is a mixed bag. The company requires consumers to spend $35 to get free shipping, but the order reaches your door in three to five business days. The retailer also offers this free standard shipping to anyone who uses its REDcard debit or credit card to pay for an online order.

Last but not least, Wal-Mart similarly has a $35 free-shipping threshold, but customers who reach that minimum get two-day shipping. That's a perk Amazon customers pay for and one that the brick-and-mortar giant used to charge $50 for under its now-defunct ShippingPass program.

Wal-Mart is the clear free-shipping winner

Excluding the Amazon Prime membership, Wal-Mart has the best deal for consumers who want to get their orders in two days at no extra charge. Keep in mind, however, that Amazon Prime offers more than 50 million eligible items for its two-day service, while Wal-Mart can only boast around two million.

For shoppers who really need their orders now, both Amazon and Target are pushing faster shipping options. Free two-hour delivery is already available to Prime members on some items in limited markets, and Target has been testing one-day delivery on what it calls "essentials" for an as yet unnamed fee. These programs are still in their early days, and for most people, two days is fast enough.

It's easy to see why millions of people happily pay for an Amazon Prime membership. In addition to streaming music and video services, being able to place even a tiny order and have it shipped out in two days is very convenient. But if you can survive with a smaller product selection, Wal-Mart has what is currently the best free-shipping offer.

Will this pay off for the world's largest retailer?

The free two-day shipping from Wal-Mart should aid the company's ongoing efforts to grow its digital customer base, but it will take its toll on margins. Amazon has shown a willingness to play the long game, sacrificing short-term profits to build a loyal customer relationship. Wal-Mart seems to be adopting a similar mindset, but it's hard to know if the company will stick to its shipping offer after a few quarters of e-commerce growth are matched by decreasing profitability.