Please ensure Javascript is enabled for purposes of website accessibility
Log In Help Join The Motley Fool
Free Article
Join Nearly 1 Million Premium Members And Get More In-Depth Stock Guidance and Research
By Daniel B. Kline – May 22, 2017 at 10:49AM

The company has some major hurdles to overcome as it tries to reverse its trajectory,

Things have not gone as planned for Frontier Communications (FTR) since the company acquired Verizon's (VZ -0.77%) wireline business in California, Texas, and Florida (CTF) for $10.54 billion.

In the just-over-a-year since that deal closed, the company has met its cost-savings targets, but it has struggled mightily with revenue and holding onto customers. Those problems have led to a massive decline in the company's share price, which, as you can see on the chart below, has collapsed.

None of these problems have discouraged CEO Dan McCarthy, who remains relentlessly optimistic even as his company's picture gets bleaker. It's not that the CEO is delusional, he just strongly believes that despite his company's struggles, there's a light at the end of the tunnel.

"During the quarter, we continued to realize our targeted efficiencies and synergies, and I am also pleased to have achieved our third consecutive quarter of improved FiOS gross additions in the California, Texas and Florida markets," he said in the first-quarter earnings release. "We are executing on a number of initiatives with the goal of enhancing customer experience, reducing churn, stabilizing revenues and generating cash flow."

That's a very rosy read on another quarter where the company lost paying subscribers and saw revenue drop. McCarthy may be able to turn his company around, but there are significant hurdles that could bring Frontier down. 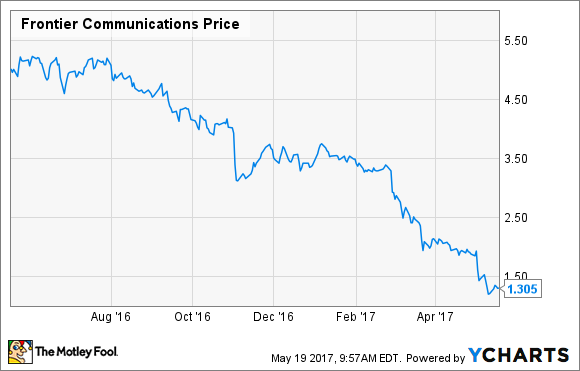 McCarthy has done a good job of managing expenses and exploiting the synergies created by the Verizon deal. He has created over $1 billion in annual cost savings, but that number won't mean anything if the company keeps bleeding subscribers.

Frontier has lost customer in all four quarters it has owned the CTF properties. McCarthy first blamed that on the switchover from Verizon, then a lack of marketing, and most recently, an effort to clear non-paying customers from the company's books.

Those excuses all seem valid, but if the company can't stabilize and then start adding paying customers, the reasons will no longer matter. Frontier bought the CTF properties to give it scale, and so far, that has paid off in operational savings, but continued drops will jeopardize the entire operation.

While it has struggled, Frontier has kept shareholders happy by paying a dividend. That isn't going away, but it iss getting a lot worse.

The company's board has authorized both a 15 for 1 reverse stock split and a cut in its dividend from $0.105 to $0.04 per share, beginning with the dividend payable on June 30, 2017. That's a sort of double-whammy of bad news that could cause shareholders to say enough is enough.

Frontier exists in all of its markets as a secondary choice for customers fed up with the major players in the cable and broadband markets. That could serve the company well as consumers cut the cord with pay television but still need to keep a broadband provider.

The risk the company faces in that area is that a number of companies are testing what could be considered national, alternative sources of broadband. There may not be an imminent risk in this area, but any new competition in offering internet service will drive prices down and cost Frontier market share.

In addition, while McCarthy's company has a marketing edge in simply not being one of its well-known, little-liked-by-consumers cable/internet/phone giants, it would not have that edge over a technology company. This is sort of a vague threat hanging over every broadband provider, but the creation of a new rival in providing internet service could be a finishing blow for Frontier.