If you're in your 70s, you'll probably appreciate an investment that can supply you with a steadily rising stream of income -- one that can help support you in retirement and that you can count on year after year.

There are some stocks out there that fit the bill. Read on to learn about one of the best. 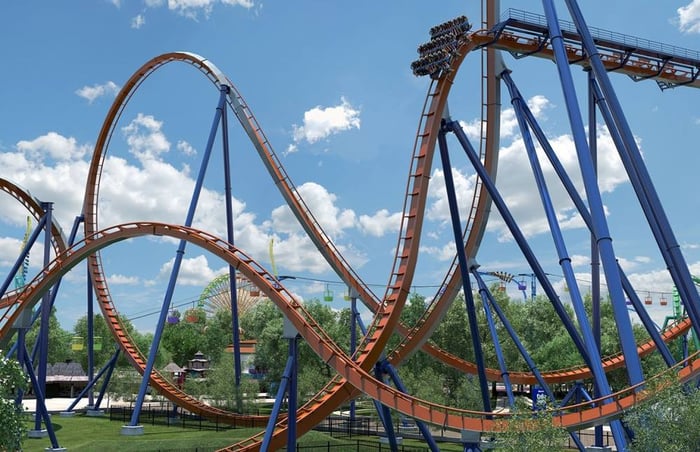 As one of the country's largest amusement-park operators, Cedar Fair (NYSE:FUN) owns a valuable collection of difficult-to-replicate assets. Its parks benefit from a near-monopoly status in their respective regions, which gives them strong pricing power. In turn, Cedar Fair is able to pass the robust cash flow its parks generate on to its unit holders in the form of a bountiful -- and steadily rising -- dividend stream. 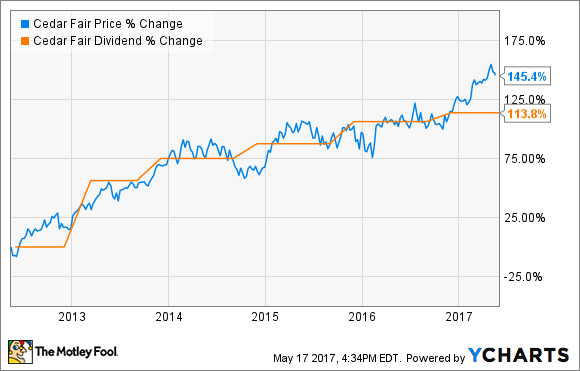 Cedar Fair's 11 amusement parks and three water parks serviced more than 25 million visitors in 2016. In turn, they produced $1.3 billion in revenue and nearly $200 million in free cash flow. There are three reasons those figures are likely to continue to rise in the coming years.

It costs Cedar Fair roughly $500 million to build an amusement park, with construction spanning several years. And that's if it can acquire the land and permits to build one.

Moreover, most areas can't support more than one large theme park, which further deters competitors from encroaching on Cedar Fair's locations. In fact, largely because of these reasons, no new regional parks have been built in the past two decades.

Since becoming Cedar Fair's CEO in 2012, Matthew Ouimet has applied the data-collection strategies he learned and implemented during his 17-year career at Disney (NYSE:DIS), including a successful stint as president of Disneyland. This data analysis has allowed Cedar Fair to use more dynamic pricing models, which maximize ticket prices based on seasonality and other variables. That's led to steady increases in attendance and average in-park guest spending in recent years. It's likewise helped to boost revenue at Cedar Fair's hotels, thanks to higher occupancy rates and average daily room rates.

Cedar Fair also benefits from Disney's propensity to consistently raise prices. That's because, while Disney's resorts are not in proximity to Cedar Fair's locations, the two companies do compete somewhat for consumers' amusement-park dollars. And so Disney's sizable annual increases make it easier for Cedar Fair to follow suit.

Cedar Fair has a slate of new rides and attractions scheduled to come online this year. The list includes new roller coasters, expanded water parks, new amateur-sports facilities, and upgraded hotels at several of its parks.

Taken together, these investments should help to boost attendance at Cedar Fair's parks and drive further revenue increases. Better still, by upgrading the quality of its amusement-park assets, Cedar Fair is also improving its long-term profit and cash flow generating abilities.

All told, Cedar Fair appears well positioned to reward investors with a growing stream of dividend distributions in the years ahead. In fact, as a master limited partnership, that's exactly what it's designed to do.

And so with its current 4.9% dividend yield, strong growth prospects, and reasonable valuation at about 20 times free cash flow, Cedar Fair is an excellent option for investors in their 70s to consider buying today.