In November 2015, Apple (NASDAQ:AAPL) introduced the 12.9-inch iPad Pro. At the time it launched, it represented the state of the art in terms of iPad technology. Then, in March of the following year, Apple launched the 9.7-inch iPad Pro.

The newer, smaller, and cheaper device was more technologically sophisticated than the 9.7-inch iPad Pro, featuring a display with a wide color gamut, meaning it can display richer colors, and a True Tone display, a feature that modulates the display's color temperature based on the color temperature of the surrounding light. 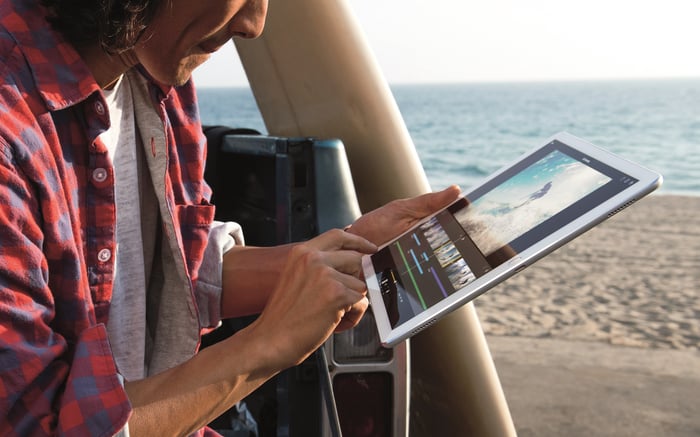 DigiTimes said the mass-production schedule of the next-generation 12.9-inch iPad Pro "is still not clear so far." However, the publication noted that "some market watchers expect [that] mass production will begin in June, with stable shipments in the third quarter."

If Apple is aiming for feature parity between the upcoming 10.5-inch iPad Pro and the refreshed 12.9-inch iPad Pro, then it's not terribly surprising that the 12.9-inch model would come later. After all, the larger display, especially if it incorporates innovative features, should be quite a bit more difficult to manufacture, so Apple might want additional time to improve manufacturing yields on this critical component before bringing it to market.

It's also very likely that Apple doesn't sell anywhere close to as many 12.9-inch iPad Pro units as it does 9.7-inch units, so it makes sense for Apple to prioritize the development of the 9.7-inch model -- and the new 10.5-inch model -- ahead of the 12.9-inch model.

The importance of the 12.9-inch iPad Pro

Apple's iPad business isn't that large relative to the company's overall revenue. In fiscal 2016, iPad revenue came in at almost $21 billion, or less than 10% of the nearly $216 billion in revenue the company raked in last year. So if the iPad as a product category isn't that big of a driver of Apple's financial results, then the sales performance of the 12.9-inch iPad Pro is virtually irrelevant. Still, Apple wants each of its businesses to perform optimally, so it's worth understanding the impact that a refreshed iPad Pro could have on Apple's iPad business.

Apple surely benefits when an iPad customer opts for a 12.9-inch iPad Pro over, say, a smaller iPad Pro model or even the standard 9.7-inch iPad, as the selling prices of these devices are the highest in Apple's product portfolio. Higher average selling prices mean greater revenue, and assuming a roughly similar gross-margin percentage for both the smaller and larger iPad Pro models, the 12.9-inch models should contribute more raw gross-profit dollars to Apple than the 9.7-inch and 10.5-inch models. It's therefore in Apple's best interest to endow the 12.9-inch iPad with as many compelling features as possible.

Right now, the current 12.9-inch iPad is, as I mentioned, behind the current 9.7-inch iPad Pro in terms of features and will certainly fall further behind when the 10.5-inch model arrives. So to try to shift iPad sales mix more toward the 12.9-inch iPad Pro, Apple will want to refresh the device as soon as it's practical to do so.