Joining Costco (NASDAQ:COST) makes sense if you take real advantage of the membership.

For many people, though, spending $55 a year for a basic Gold Star membership -- or $60 after June 1 -- does not end up being a good value. In some cases, shopping at the warehouse club simply takes more effort than you want to put in, and in others, geography makes visiting the chain too much of a hike.

Others may find Costco appealing, but in reality, after joining, they find they only buy a few things there. Yes, the prices are good, but warehouse clubs are built around getting good prices in exchange for buying in bulk. That simply does not make sense for the people who want good prices but don't want to have to purchase in large quantities.

If joining Costco (or another warehouse club) makes less-than-perfect sense for you, Trader Joe's may be an option. The grocery chain is not a warehouse club, but it does offer deals on many popular items without requiring you to pay a membership fee for the privilege.

Following are four items people often buy in bulk at Costco that they can easily get at Trader Joe's at a good price. Of course, you won't find everything that you will in a warehouse club, but many of the key staples are available at this smaller grocery chain. 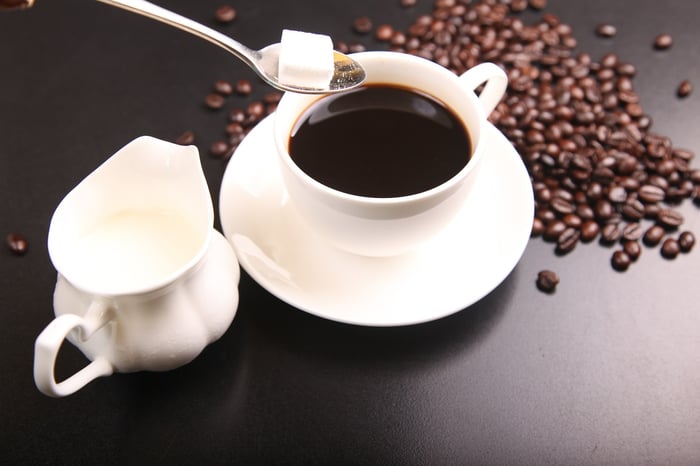 Get your coffee fix

While Costco sells a number of popular brands, as well as K-Cups and coffee beans under its Kirkland house label, Trader Joe's rivals its coffee selection with its own house brand.

The grocery store sources its own beans from around the world and clearly takes its coffee very seriously. Trader Joe's even offers a guide to its various coffee choices, along with suggestions as to how each should be brewed based on your desired flavor profile. It can even be argued that, at some points, Trader Joe's actually has a better coffee selection than Costco, and consumers can buy in small enough quantities to allow them to sample multiple brews.

In addition to selling coffee, Trader Joe's also, in many markets, offers wine and beer, often at stunningly good prices. For Costco customers who enjoy the chain's liquor offerings, Trader Joe's cannot match that since it strictly carries wine and beer, but in those areas, it's very competitive.

The chain has gotten a lot of attention for its Two-Buck Chuck line of wines from the Charles Shaw winery. Literally sold at $2 per bottle, these are not high-end wines, but they're shockingly drinkable. If your budget stretches a little further, Trader Joe's has numerous wines under $10 or even $5 that are well worth the money, along with a deep selection of beer built around local and regional craft brands.

Costco sells name-brand cereals often in multiple-box or very large box quantities. If you have a very big family (or are running a summer camp), that can be useful, but most people run the risk of part of their purchase going stale.

Trader Joe's has house-branded cereals, though it's not hard to figure out what which name brand a product like "Joe's O's" is trying to emulate. These are generally very cheap compared to regular grocery stores and a better deal when it comes to actually eating them than Costco's bulk deal.

While Costco sells a selection of frozen dinners, meals, and side dishes, Trader Joe's has turned the concept into an art. The chain has inexpensive, high-end frozen options that often taste pretty good.

That may sound like weak praise, but in most cases, when you buy frozen meals at a grocery chain or warehouse club, you are trading enjoyment for convenience. In Trader Joe's case, the chain specializes not in meal-on-a-plate frozen dinners, but single dishes. In many cases, its offerings can be enhanced with fresh ingredients serving as sort of a meal starter.