Please ensure Javascript is enabled for purposes of website accessibility
Log In Help Join The Motley Fool
Free Article Join Over 1 Million Premium Members And Get More In-Depth Stock Guidance and Research
By Adam Levine-Weinberg – May 23, 2017 at 9:25AM

Department-store stocks got crushed earlier this month as companies throughout the sector reported comp sales declines for the first quarter. Even the ever-reliable TJX Companies (TJX 0.61%) only managed a 1% comp sales gain. Indeed, its main Marmaxx division, which includes Marshalls and T.J. Maxx stores in the U.S., posted flat comps in Q1.

However, Ross Stores (ROST -0.08%) -- TJX's top rival in the off-price space -- did manage to buck the overall weak retail trend. It posted a solid 3% increase in comparable-store sales for the first quarter and beat analysts' earnings estimates once again.

Ross Stores has been exceeding investors' expectations for some time. While the retail industry as a whole was hurt by slowing customer traffic and rising costs last year, Ross Stores posted a second straight 4% comp sales gain in fiscal 2016 and grew earnings per share 13% year over year. Steady growth like this has helped the company's share price double in the past five years. 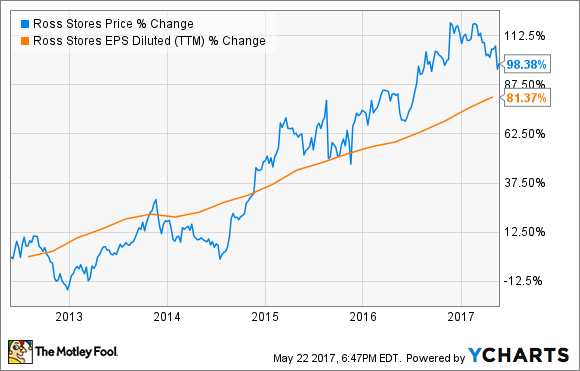 By contrast, TJX turned in an uncharacteristically weak revenue performance last quarter. Its 1% comp sales increase was at the high end of its guidance range, but TJX typically blows past its sales forecasts.

On the bright side, EPS did reach $0.82, up from $0.76 a year earlier, beating the average analyst estimate of $0.79. However, this earnings growth was driven entirely by foreign currency gains and the change in accounting rules for stock-based compensation.

Looking ahead to the second quarter, TJX has higher expectations for sales. It forecast that comp sales will increase 1%-2% year over year. This is probably a conservative forecast, as usual. On the flip side, TJX will face cost headwinds from foreign currency in Q2 (unlike last quarter), so it will be tough to post significant EPS growth.

Will Ross Stores maintain its edge?

Second, TJX was more affected by unfavorable weather trends than Ross Stores during the quarter. Ross Stores has very little presence in the Northeast -- and none at all in New York and New England -- which insulates it somewhat from the vagaries of winter weather.

Third, Ross Stores has a more conservative strategy than TJX. It sticks to what it already does well. For example, it hasn't opened any stores outside the U.S., and it doesn't have an e-commerce business. (As noted, it hasn't even tried to expand into the Northeast.)

By contrast, TJX has historically been more willing to make long-term bets to drive future growth. Thus, it has dipped its toe into the e-commerce world. It has also expanded beyond apparel-focused stores, opening the successful HomeGoods chain. More recently, it has ventured into outdoor equipment with its Sierra Trading Post brand. It plans to open a second home-furnishings chain in the U.S. later this year. Lastly, TJX has entered a variety of foreign markets.

In all, these bets have worked out well for TJX, putting it on pace to surpass $35 billion in revenue this year. However, the company's international business has seen significant profit pressure and inconsistent sales growth recently, particularly in Europe. This situation contributed to last quarter's sales miss.

Ross Stores has plenty of room to grow in the U.S. without straying from its current business model. It's a safer choice for investors. That said, TJX may have more upside if all of its long-term bets ultimately meet expectations.

Why Ross Stores Stock Was Up 10% This Week

Should You Buy the Dip in This Blue Chip Retailer?
356%