Share of the retailer slipped on Wednesday even though the company just wrapped up another year of double-digit EPS growth.

Last week, off-price leader TJX (TJX -0.24%) reported solid fourth-quarter earnings that beat both its own forecast and analysts' expectations. It also forecast that profit would rise further in the coming year. This sparked a nice increase in TJX's stock price.

On Tuesday, its smaller rival Ross Stores (ROST 1.17%) reported even stronger Q4 earnings growth. It, too, expects profit to continue rising this year. Yet the weight of high investor expectations dragged down Ross Stores stock on Wednesday. Shares fell nearly 3% even as the stock market logged its best day of the year. 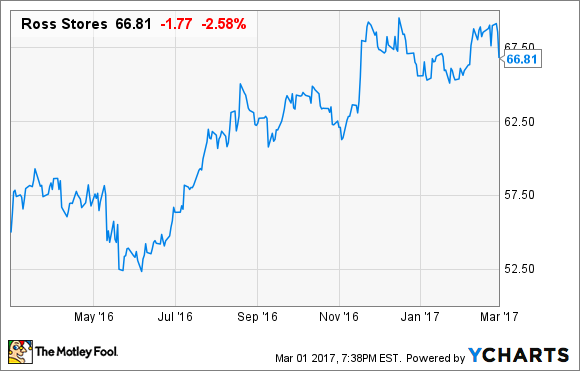 Investors appeared to be hoping for better financial guidance for the 2017 fiscal year. Yet Ross Stores -- like TJX -- has a history of being conservative with its initial forecast. Thus, this could be a good time for long-term investors to scoop up shares of Ross Stores at a discount.

Another quarter of off-price dominance

TJX posted revenue growth of 6% last quarter, on a 3% comp sales increase. Despite some modest margin compression, earnings per share reached $1.03, up from $0.99 a year earlier. For the full year, adjusted EPS increased by 6% to $3.53.

As has often been the case lately, international markets held back TJX's performance last quarter, due to the strong dollar. However, this headwind may start to fade soon, enabling faster earnings growth. TJX has forecast that adjusted EPS will rise 5% to 7% this year, excluding the impact of having an extra week in the current fiscal year.

Ross Stores doesn't have any international stores. As a result, it has been outperforming TJX since the dollar began its ascent in late 2014. This trend continued last quarter, as revenue rose 8% year over year on a 4% comp sales increase, in line with Ross Stores' full-year revenue trend. EPS soared 17% year over year to $0.77 in Q4. For the full year, EPS increased 13% to reach $2.83.

Ross Stores' initial forecast for fiscal 2017 calls for EPS of $3.02 to $3.15, up 7% to 11% year over year. This includes an expected $0.08 benefit from the extra week in the fiscal year. An accounting change related to stock-based compensation is also benefiting EPS this year. Stripping out both of those effects, EPS would be up 3% to 7%.

For the first quarter specifically, Ross Stores expects EPS of $0.76 to $0.79 (up from $0.73 a year earlier) on a 1% to 2% comp sales increase. Both the full-year and first-quarter profit estimates were below analysts' expectations, disappointing investors.

Ross Stores' outlook may not seem very impressive, but it's important to note that TJX and Ross Stores have a history of offering conservative guidance and then beating those numbers.

In this context, investors should take CEO Barbara Rentler's recent comments about "uncertainty in the political, macro-economic, and retail climates" with a grain of salt. Cautious guidance is par for the course at Ross Stores. Indeed, management is calling for the same level of revenue and earnings growth in fiscal 2017 that it predicted at the beginning of fiscal 2016.

Furthermore, Ross Stores has plenty of room to expand. It has no presence whatsoever in New York, New England, and some parts of the Midwest. Management thinks the company can grow from operating a little over 1,500 stores today to a long-term footprint of 2,500 stores. That doesn't even account for the possibility of international expansion.

Thus far, Ross Stores has shown no vulnerability to the changing shopping trends that have wounded other retailers so badly. If the company continues to be as successful in the coming years as it has been for the past five to 10 years, Ross Stores shares can climb much higher.