Zoe's Kitchen (NYSE:ZOES) investors have to be feeling pretty nervous these days. The fast-casual chain specializing in Mediterranean eats announces fresh quarterly results on Thursday, and at least one Wall Street pro is brazen enough to downgrade the stock just ahead of the report.

David Tarantino at Baird is lowering his rating on the stock from Outperform to Neutral. He feels that the recent uptick in input costs and sluggish comps for other chains that have already reported this earnings season bode poorly for Zoe's. He feels the stock is a risky buy here, despite trading 64% below its all-time high set nearly two years ago. He's lowering his price target from $25 to $20, and the only silver lining there is that there's still some upside to the new goal with the stock in the mid-teens.

Shares of Zoe's Kitchen tumbled 8% on Monday's downgrade. A now former bull cooling on a former market darling is never a good thing to see, but the timing of the downgrade -- three days before Zoe's Kitchen steps up with its first-quarter results -- is brutally painful. 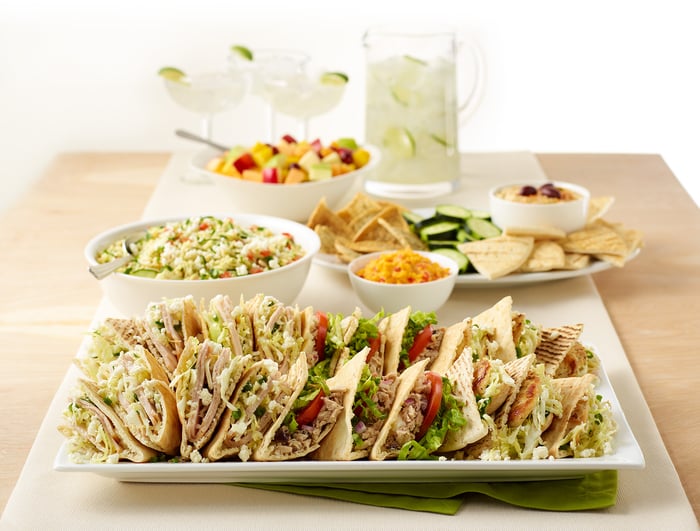 Analysts aren't holding out for much. They see revenue climbing 15% to $92.7 million. Double-digit sales growth may seem rare these days in the challenging restaurant industry, but most of that projected growth is coming from new locations that Zoe's Kitchen has opened over the past year. If revenue fails to improve by at least 17.6% in Thursday's report it will be the chain's weakest top-line growth as a public company. The report will also mark the fifth straight quarter of year-over-year decelerating revenue growth.

The news isn't likely to be any better on the bottom line. None of the analysts tracking the stock expect Zoe's Kitchen to match or exceed the $0.06 a share it posted during last year's first quarter. Wall Street's consensus target is $0.01 a share, and some are holding out for a small deficit.

Baird's Tarantino moving to the sidelines just days before the actual report is cruel, but recent history has rewarded the cautious stance. Shares of Zoe's Kitchen took a 12% hit the day after it posted poorly received fourth-quarter results three months ago. The stock tumbled nearly 6% after hosing down its guidance the day after posting third-quarter results. The shares plunged 17% the day it posted uninspiring second-quarter results. The stock has taken an average hit of nearly 12% in the past three quarters, making it hard to bet against the trend.

The stock has declined in five of the past six quarters, and it's approaching its 2014 IPO price of $15. The good news for investors is that Zoe's Kitchen has more than doubled in size over the past three years, and comps have risen for 28 consecutive quarters. Margins remain a challenge, but there's a reason why Zoe's Kitchen is trading well short of its 2015 peak. Pessimism has been the winning approach in recent quarters, largely because Zoe's Kitchen has either lowered its guidance or failed to live up to its earlier guidance in each of its past three quarters. If it can end that streak -- while still keeping its string of positive comps alive -- it could be the end of the run of cascading stock prices following Zoe's Kitchen's quarterly reports.