Please ensure Javascript is enabled for purposes of website accessibility
Log In Help Join The Motley Fool
Free Article Join Over 1 Million Premium Members And Get More In-Depth Stock Guidance and Research
By Maxx Chatsko – May 24, 2017 at 8:45AM

The MLP was created to deliver profits directly to shareholders. Problem is, profits -- and distribution payments -- have dried up.

On paper, there's a lot to like about nitrogen. It's one of the three major agricultural nutrients -- next to phosphate and potassium -- and is critically important for corn and soybean farmers. Since plants are incapable of fixing nitrogen on their own, vast amounts of it must be produced synthetically and then applied to fields. Seems like a slam dunk, except that in recent years nitrogen fertilizer manufacturers have produced more product than the markets can handle.

That hasn't made it fun to be a shareholder in CVR Partners LP (UAN 3.60%), one of the only pure-play nitrogen investments, which has seen its stock fall 69% in the past three years -- and that's with dividends included. However, the company doesn't appear to be nearing a recovery anytime soon. Consider these three signs that you should sell the stock. 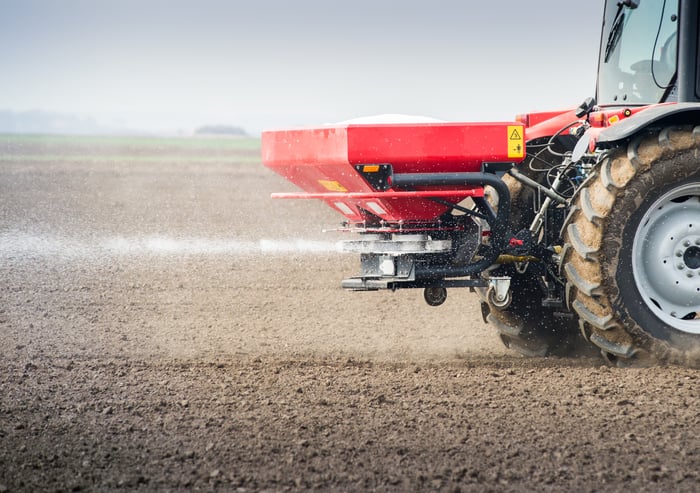 A master limited partnership receives special tax considerations to directly pay out most of its profits to shareholders. That was the point of creating CVR Partners LP years ago. Although it paid out hefty quarterly distributions earlier in its life as a publicly traded company, it hasn't paid out four distributions in a single year since 2014.

There's a simple reason for management's decision to forgo payments: If you don't have profits, then you can't pay them out. The last quarterly profit occurred in the first quarter of 2016. Pricing pressure for nitrogen fertilizers had been working its way through the industry since late 2014, but lingering headwinds made 2016 a particularly horrendous year for CVR Partners LP.

The company managed to squeak out three distribution payments last year, the most recent in August, with hopes that a recovery in selling prices would lessen the long-term consequences of that decision. But that hasn't materialized yet, which forced management to skip payouts in November and February. The payout for May was just $0.02 per share -- by far the lowest ever.

Simply put, without a return to profitability soon, investors won't be able to take advantage of the tax advantages CVR Partners LP was created to deliver.

Deteriorating selling prices for nitrogen fertilizers have had an obviously negative impact on the company's cash flows, too. Operating cash flow has declined in each of the past three years, falling from $129 million in 2013 to just $45 million in 2016. There are several factors at play beyond the obvious reasons. 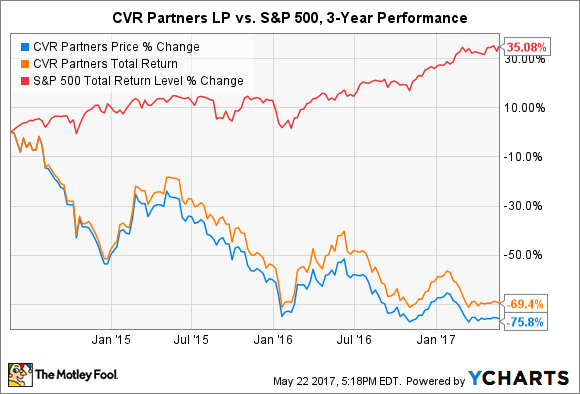 First, CVR Partners LP specializes in producing urea ammonium nitrate (UAN), which boasts a premium price over less upgraded forms of nitrogen, such as ammonia. While the existence of a premium has held in recent quarters, the gap has become smaller, as competitors have added production capacity and ammonia prices have fallen less sharply than those for UAN.

Second, the company uses petroleum coke in its production processes. This was a competitive advantage for CVR Partners LP in years past, since all competitors used comparatively more expensive natural gas. That allowed it to capture higher margin from a more cost-effective process. However, the sheer abundance of natural gas has mostly eroded this advantage more recently, and a supply agreement for nearly 30% of its pet coke needs is set to expire this December.

The need to diversify production processes was a major factor in the decision to merge with Rentech Nitrogen Partners, which uses a more traditional natural-gas-fed process at its facility. The move could pay off if nitrogen fertilizer selling prices improve to historical levels, but for now CVR Partners LP is stuck with Rentech's relatively high debt levels.

The company bought itself more financial flexibility through a combination of refinancing transactions that culminated with the offering and sale of $645 million in debt notes in June 2016. It was a necessary evil for closing the merger with Rentech, but it has proved costly in the short term.

The level of long-term debt rose from $124 million in the first quarter of 2016 to $623 million at the end of the first quarter of 2017. That has been accompanied by a nearly tenfold increase in quarterly interest payments, which totaled $15.7 million last quarter. It may not seem like much, but it's equivalent to $0.14 per share. That means interest expenses could eat up $0.56 per share per year, which certainly hasn't been offset by expanded operations yet. Investors should consider any money tied up in interest payments as money that won't be distributed as profits.

The solution here is pretty clear: CVR Partners LP needs a sharp rebound in nitrogen fertilizer selling prices to solve its pressing issues regarding profitability, operating cash flow, and making the Rentech merger worth the relatively heavy debt burden. Removing these obstacles would allow the company to resume its formerly eye-popping distribution payments to shareholders. However, since a recovery doesn't appear to be coming anytime soon, investors should consider selling this stock.