Holly Energy Partners, L.P. (NYSE:HEP) is in the oil and natural gas midstream space. However, that only tells you so much, since there are a variety of different businesses that get labeled midstream. So, you need to take a moment to learn how Holly Energy actually makes most of its midstream money. One vital fact is that it's the fees that separate Holly from many of its peers.

Midstream assets sit between where oil and natural gas are pulled out of the ground and their final end use. There's a lot that goes on before oil is pumped into your gas tank as gasoline, from the pipelines that move the fuel to facilities that process it -- it can all be called midstream. For example, industry giant Enterprise Products Partners (NYSE: ETP) owns pipelines, storage facilities, processing facilities, terminals, and, believe it or not, ships. Holly, meanwhile, only owns pipelines and terminals. 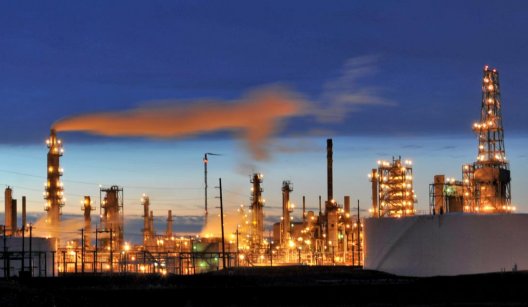 There are different ways midstream companies can get paid, too. This is important because it can dramatically alter the security of the cash flows used to pay distributions. For example, Martin Midstream Partners (NASDAQ:MMLP) gets about 70% of its top line from fees. The rest comes from margin-based businesses that expose the partnership to price fluctuations, something that helped lead to a distribution cut in late 2016. Holly Energy Partners' revenues are 100% fee-based.

But there's more. Roughly 80% of Holly Energy's revenues are driven by long-term contracts or deals with minimum commitments. In other words, the partnership's top line isn't going to be too affected by the ups and downs of the oil and natural gas markets. So, there's a pretty solid foundation underpinning the partnership's 7.2% distribution yield. 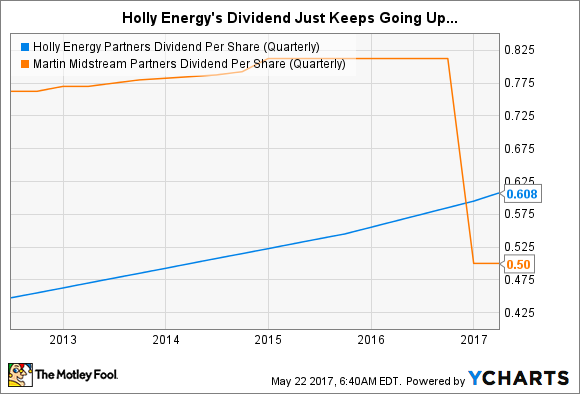 This backstory also helps explain why the distribution has increased every single quarter since Holly Energy Partners went public, a streak that's up to 50 quarters. For comparison, Enterprise, generally considered one of the best-run limited partnerships, has a quarterly streak that's 51 quarters long. In other words, Holly Energy has an impressive distribution history.

Holly Energy Partners is basically designed to generate stable fee income so it can throw off regular and growing cash stream to unitholders. Which brings up another important piece of the puzzle, here. Holly Energy Partners is run by HollyFrontier Corp (NYSE:HFC), a major U.S. refiner. It owns Holly Energy units directly and a small general partner interest. That general partner interest means it runs the partnership and is entitled to incentive distributions when the partnership's distribution is increased.

Having a general partner can increase costs for a partnership because of those incentive payments. However, you can see where HollyFrontier has a vested interest in keeping Holly Energy Partners' distribution growing. One of the ways it does that is by selling, also known as dropping down, assets to the partnership over time. 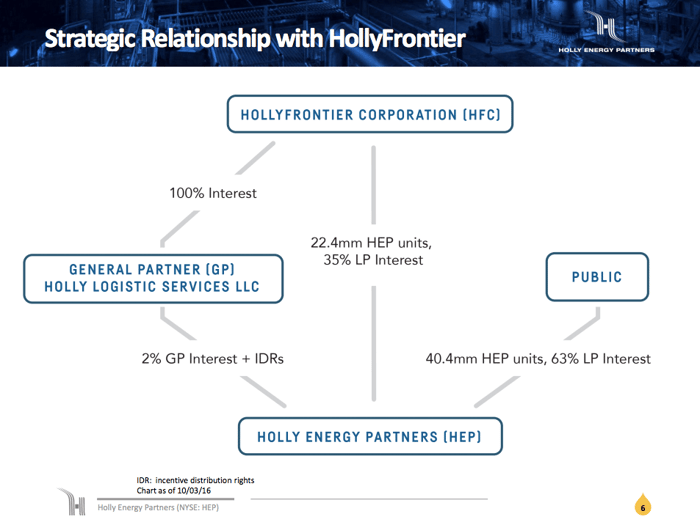 This is important because, as a partnership, Holly Energy distributes a huge amount of money to unitholders. That limits the amount of money it can put toward growth projects and increases the importance of acquisitions. Holly Energy has a "parent" that's happy to keep selling it assets, often selling new units to pay for the acquisitions. This isn't an exclusive relationship; Holly Energy buys assets from other companies, too. But HollyFrontier is a ready-made partner with a vested interest in Holly Energy's business growth.

When you put it all together, Holly Energy Partners' business is basically designed to provide unitholders with steady income and income growth. The 100% fee-based asset portfolio is the foundation of that. However, you also need to understand that general partner HollyFrontier has a vested interest in building off of that base for itself and for you. This is a slow and steady tortoise type of an investment, but if you're looking for reliable income, knowing how Holly Energy Partners makes most of its money can make that over 7% yield look extra enticing.