It wasn't too long ago that Intuitive Surgical (NASDAQ:ISRG) seemed to have lost its way. The maker of robotic surgical systems hit a rough patch in 2013. A federal probe was initiated to investigate the safety of the company's da Vinci system. Then Intuitive Surgical's revenue disappointed as hospitals broadly faced financial pressures.

The story is a lot different now, though. Intuitive Surgical turned in a solid performance last year, and its stock responded. Shares have continued to rise, and are up nearly 40% so far in 2017. On Tuesday, the stock touched another all-time high. So at this point, should investors buy, sell, or hold Intuitive Surgical? Let's consider the arguments for each alternative. 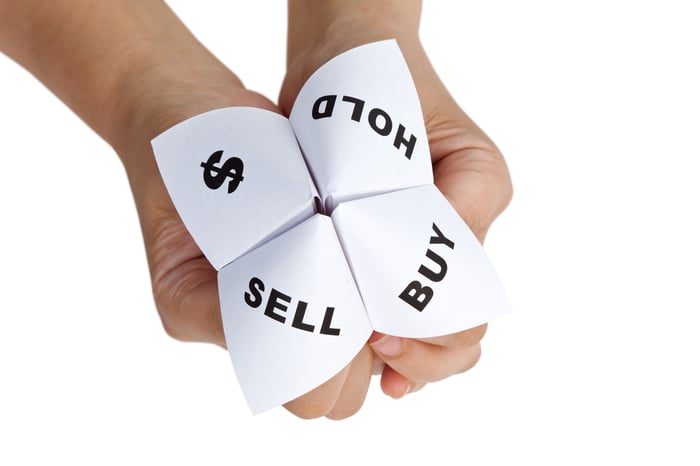 There are three major reasons to think the best is yet to come for Intuitive Surgical, making the stock still a buy.

First, the demographic trends are definitely in the company's favor. Over the next decade, the maturing of the millennials will put larger numbers of women into the age range in which hysterectomies are most common. Meanwhile, among baby boomers, more and more men are poised to enter the age group for which prostatectomies are most common. These two surgeries are the ones most frequently performed by Intuitive's da Vinci systems.

Second, there are plenty of additional procedures for which the da Vinci system could eventually be used. As the company demonstrates its value proposition in these surgeries, one can expect hospitals that have made significant capital investments in its robotic surgical systems to jump on the new opportunities to leverage those investments -- which will further boost consumables sales. And hospitals that haven't purchased da Vinci systems will have even more reasons to do so.

Third, Intuitive Surgical has a lot of room to grow in international markets. More than 65% of da Vinci systems are installed in the U.S., a country with less than 5% of the total world population.

Intuitive Surgical has enjoyed a virtual monopoly in the robotic surgical system market since it first debuted da Vinci. Its primary competition has been the status quo of performing surgeries manually. However, direct competition is just around the corner. Selling Intuitive Surgical stock now would lock in gains before the company has to engage in a serious fight for customers.

Medtronic (NYSE:MDT) expects to launch a robotic surgical system designed to go head-to-head with da Vinci in 2018. Although Medtronic doesn't anticipate significant revenue from its new system until 2019, Intuitive Surgical will soon face a formidable competitor with deep pockets and a large established marketing presence in the hospital market.

In addition, Medtronic has a stake in Israel-based surgical robot company Mazor (NASDAQ:MZOR). In May 2016, the two companies entered into an agreement to co-promote and co-develop some of Mazor's products; Medtronic will eventually becoming the global distributor for Mazor's spinal surgery systems.  Although Mazor's areas of focus don't currently compete directly with Intuitive Surgical, it's not too hard to envision a future where the companies become rivals.

Another potential competitor is Verb Surgical, a joint venture of Johnson & Johnson (NYSE:JNJ) and Alphabet (NASDAQ:GOOG) (NASDAQ:GOOGL). Verb intends to tie machine learning, robotic surgery, instrumentation, advanced visualization, and data analytics together to develop systems that can be used for complex surgical procedures, including the removal of cancerous tumors. The company has been keeping quiet about the details, but J&J has hinted that Verb could launch a robotic surgical system by 2020.

Hold -- the business is strong, but the stock is expensive

The middle-of-the-road argument is that this is neither the time to buy nor to sell Intuitive Surgical stock. If you already own shares, hold them. If you don't, hold off on buying.

Intuitive Surgical's business prospects remain strong. Competition might be on the way, but it won't be a factor in the immediate future. For these reasons, holding on to the stock could be prudent.

That said, perhaps the best reason not to buy Intuitive Surgical today is that the stock's valuation is expensive. Shares currently trade at nearly 45 times trailing 12-month earnings and almost 33 times expected earnings. Even with good prospects for double-digit percentage earnings growth, Intuitive Surgical's P/E ratio still looks high. For that matter, the overall stock market is expensive. Waiting for a pullback before you open a postion could be the best approach.

Of these three choices, I'd rule out selling Intuitive Surgical stock. The arguments as to why better days are ahead for the company are pretty compelling. It will be years before Medtronic, Verb Surgical, or any others become significant threats to its business -- if they do at all.

In my view, buying Intuitive Surgical now is a good option, but so is holding off to buy until we see a market pullback. The problem with that latter option, though, is that you never know when decline will occur -- or which companies it will impact. It's entirely possible that the current stock price is the least expensive Intuitive Surgical shares will ever be.