Please ensure Javascript is enabled for purposes of website accessibility
Log In Help Join The Motley Fool
Free Article Join Over 1 Million Premium Members And Get More In-Depth Stock Guidance and Research
By Evan Niu, CFA – May 24, 2017 at 5:00PM

Earlier this month, after unveiling the new Surface Laptop, Microsoft (MSFT -0.59%) Surface chief Panos Panay told CNET that "there's no such thing as a [Surface] Pro 5." Panay was attempting to address speculation that a Surface Pro 5 was in the works, as the device was in need of updates given the fact that the Surface Pro 4 launched back in October 2015. Referring to a refresh, the executive added, "When it's meaningful and the change is right, we'll put it on market," clarifying that meaningful changes aren't always exclusively hardware-based and "an experiential change" is really what the company is looking for.

It now appears that Microsoft's next Surface Pro is ready. 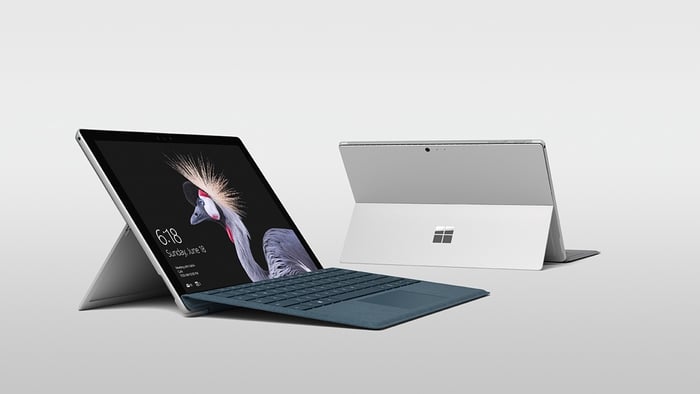 The latest and greatest Surface Pro

Yesterday, the company unveiled the new Surface Pro. Microsoft says the new device has been "completely redesigned," although it closely resembles previous generations of Microsoft's flagship 2-in-1. It is thinner, lighter, and boasts up to 13.5 hours of battery life. The hinge now folds farther back to enable "Studio Mode," which targets creative professionals using a Surface Pen. A seventh-generation Intel Core chip powers the Surface Pro.

The software giant took a few jabs at Apple in its unveiling, saying existing Surface Pro 4 users are "more likely to recommend their device than iPad and MacBook users." The comparisons don't end there: The company also says the new Surface Pro's battery life is 35% greater than the iPad Pro, and has 1.7 times as much processing power.

The new Surface Pro starts at $800 and will start shipping worldwide on June 15.

Overall, it's a pretty standard -- but much-needed -- refresh. However, the update is probably shy of an "experiential change." Surface revenue has been trending lower (down 25% last quarter to $831 million), which is just a natural function of aging products. 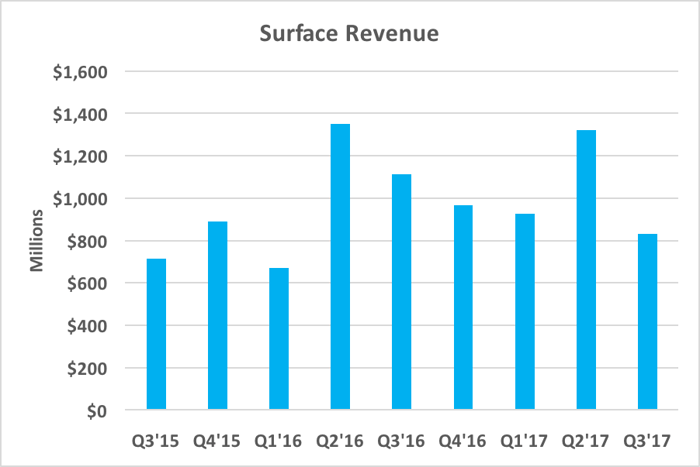 It's also worth noting that the Surface family is rapidly expanding to include a number of different form factors and product categories, underscoring Microsoft's commitment to building its own hardware lineup. Beyond a 2-in-1 convertible tablet (Surface Pro), Microsoft now has two laptops (Surface Book and Surface Laptop) and an all-in-one (Surface Studio), with price points ranging from $800 to $4,200. And then there are first-party accessories like Surface Pen, Surface Dial, and Surface Dock, to name a few.

On a trailing-12-month basis, Surface is now a $4 billion business. The segment has hit a minor speedbump over the past few quarters, but it's mostly due to a lack of updates. The updates, combined with entirely new products, should help the Surface segment continue growing, as Microsoft's hardware ambitions show no signs of slowing down.