Please ensure Javascript is enabled for purposes of website accessibility
Log In Help Join The Motley Fool
Free Article
Join Nearly 1 Million Premium Members And Get More In-Depth Stock Guidance and Research
By Daniel B. Kline – Updated May 24, 2017 at 6:11PM

The online retailer has shown amazing growth and achieved success at nearly everything it has done, but it does have some concerns.

Amazon (AMZN -1.44%) may dominate online retail, but that does not mean the company has nothing to worry about. American history has shown that giants can fall. Chains that once dominated the retail space can end up teetering on the edge of existence, as we're seeing now with Sears Holdings.

Amazon may have no immediate fears, but things can change quickly, and the company clearly understands that. In its annual report, as every publicly traded company does, the online retailer laid out its risk factors. Of course, some of these are perfunctory and generic, like, "we operate in a competitive space," but other risks laid out by Amazon show what the company actually worries about.

What are Amazon's biggest fears?

In its 2016 annual report, Amazon listed a number of typical concerns, including "intense competition" and rapid expansion "straining" management and other resources as well as dangers associated with doing business all around the world. Those are pretty typical risks for a company of Amazon's size and reach.

They have to be listed, but it's like the equivalent of your life insurance company having to factor in that you may get eaten by a shark before setting your rates.

Amazon's list of risks, however, does include two potential problems that may actually occur. Neither of these is likely to derail the company, but either of them could slow the online retailer's stunning growth or be a major drag on profit. 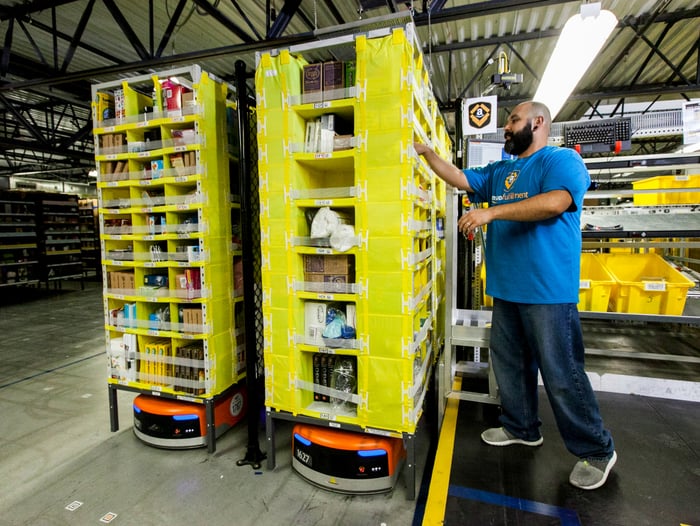 Shipping costs could be a problem

Amazon has so far done a spectacular job in optimizing its shipping operation. That's a key to the company's success as its ability to control shipping costs remains key to its success given that tens of millions of people pay $99 a year for free two-day shipping.

In the United States, Amazon has an estimated 65 million Prime members, about 52% of its total customers, according to data from Consumer Intelligence Research Partners (CIRP). Serving those customers and keeping them happy is the core of the retailer's business, but the company acknowledges that shipping could become a problem.

"A failure to optimize inventory in our fulfillment network will increase our net shipping cost by requiring long-zone or partial shipments," the company wrote.

In addition to potential inventory management issues, Amazon also acknowledged that the limited number of shipping companies it works with could cause an increase in shipping costs.

"If we are not able to negotiate acceptable terms with these companies or they experience performance problems or other difficulties, it could negatively impact our operating results and customer experience," Amazon added.

Perhaps the biggest risk facing Amazon is hackers. No company can completely guarantee that its security won't be breached. That's a large concern at a company that could have its store knocked offline or the hundreds of millions of credit cards it holds information on compromised. Amazon laid out its concerns in its annual report.

As a result of our services being web-based and the fact that we process, store, and transmit large amounts of data, including personal information, for our customers, failure to prevent or mitigate data loss or other security breaches, including breaches of our vendors' technology and systems, could expose us or our customers to a risk of loss or misuse of such information.

The online retailer also acknowledged that it does use some third-party technology and that could be breached as well. Amazon even admits that while it has "developed systems and processes that are designed to protect customer information and prevent data loss and other security breaches," that "such measures cannot provide absolute security."

Companies have to list reasonable risk factors in their annual reports and Amazon's are reasonable, but not anything that impacts its survival. Both of these issues, however, could impact the company's business.

As recently as 2013 Amazon had major shipping issues during its pivotal holiday seasons as both UPS and FedEx failed to meet its two-day delivery requirement resulting in refunds, make-goods, and customer anger. No major problems like that have happened since then, but it's certainly not inconceivable.

On the data side, no company is completely safe, and consumer reaction to breaches can be unpredictable. The biggest risk for Amazon may be a credit card breach. If customers have new cards issued by their provider, they would need to give the changed information to the online retailer. That's something they may be wary about doing after a breach, which could put a major dent in the company's customer base.

Both of these risks are possible and were either situation to occur it could damage Amazon's business but neither would be insurmountable in the long term. Shareholders should be aware that these risks exist, but they represent possible potholes in the road for the retailer, not survival-threatening events.