Amazon.com (NASDAQ:AMZN) turned 20 as a public company earlier this year, and the stock is being celebrated for its monstrous game-changing wealth creation. The stock is a 660-bagger since going public at a split-adjusted price of $1.50 on May 15, 1997.

Shares of the leading online retailer hit new all-time highs this year, and it's easy to wonder when the stock will split again. Amazon stock has been weaving over and under the $1,000 mark, and while these transactions aren't as important as they used to be -- individual investors can buy a share at $1,000 just as easily as they can buy 100 shares of the same stock at $10 -- there are a couple of compelling reasons for the dot-com darling to consider executing what would be its fourth stock split as a public company. 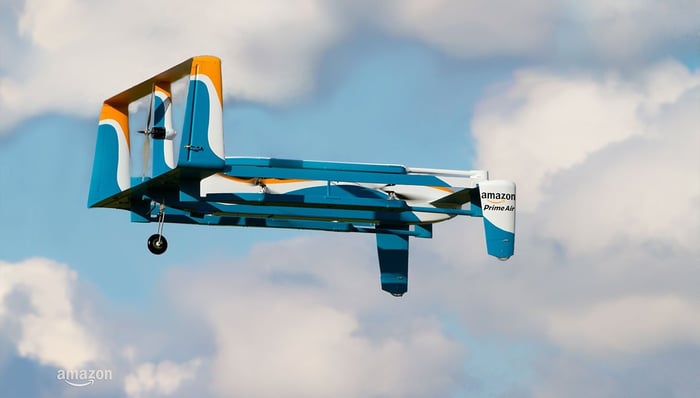 Amazon went through three stock splits during the sudsy days before the dot-com bubble popped. The company wasn't profitable. It would go on to post a massive $1.4 billion deficit in 2000. However, Amazon was growing, and it was an internet stock at a time when investors valued eyeballs over actual financial results.

Amazon rolled out the three splits in a 15-month window that began a year after its 1997 IPO. It's now been 18 years since its last split, and one would think that lowering its share price in a zero-sum transaction is long overdue. The first three splits were announced when the stock was in the high double-digits, or just crossing into the triple-digits. Why wouldn't it go this route now that it's approaching quadruple-digits?

The easy explanation is that Amazon doesn't have to declare a stock split. The shares have soared roughly 660-fold, so it's not as if the stock's buoyant share price has been a detriment to capital appreciation. There's also some vanity associated with a chunky share price. It's a sign of success. You can blame Warren Buffett for that, even if he's obviously not as flashy as some of the tech giants that have been racing alongside Amazon.

Thankfully for folks rooting for a stock split, there are two good reasons for the country's most valuable retailer to consider a split. Let's start with accessibility. Stock commissions are cheaper than they were in the late 1990s, and it's as easy to buy a single share of a stock as it is to buy a round lot of 100 these days. However, with Amazon approaching $1,000 per share, it's a realistic hurdle for some individual investors trying to take advantage of low commissions to initiate positions and diversify within a modest portfolio.

Perhaps the bigger reason to consider a split now -- or at least the moment the stock crosses four figures -- is index inclusion. Amazon is naturally a member of the S&P 500 and Nasdaq 100 indices, but it's not in the Dow Jones Industrial Average.

The Dow 30 is a price-weighted index, which, unlike the S&P 500 and most of the other popular market gauges, bases a stock's weighting in the index by its share price. Amazon may have topped Wal-Mart (NYSE:WMT) to command the largest market cap in the retail industry two summer ago, but it's not getting into the Dow at its current price. A $1,000 price tag makes it more than four times as valuable as the stock that is currently the Dow's highest-priced component. More to the point, Amazon's stock price is worth more than its 15 lowest-priced components combined. A move by Amazon stock if it was in the Dow would be more than enough to offset a similar move going the other way for the lower-priced half of the Dow 30. Obviously there are no guarantees that Amazon will be tapped for Dow inclusion if it does execute a stock split, but it's not a coincidence that Apple (NASDAQ: AAPL) wasn't added until it finally gave up the race to $1,000 and announced a 7-for-1 split in 2014.

Amazon CEO Jeff Bezos didn't get as far as he did by being conventional. He's not going to buckle to the clamoring for stock splits. However, making the share price more accessible to entry-level investors and opening up the possibility for joining Wal-Mart in the Dow are compelling reasons to consider the move. We'll have to wait and see what the company decides.