Shares of Wynn Resorts (NASDAQ:WYNN) rose 2.8% on a relatively quiet day Monday on speculation the company is gaining market share in Macau. Analysts at Sanford C. Bernstein think that not only will Macau grow double digits again in May, but Wynn will gain market share over rivals like Las Vegas Sands (NYSE:LVS) and Melco Entertainment (NASDAQ:MLCO).

MGM Resorts (NYSE:MGM) may have also gained some share, according to the analyst, but it's Wynn who gets a much bigger percentage of its revenue from Macau, and a gain in market share would be big news for investors. 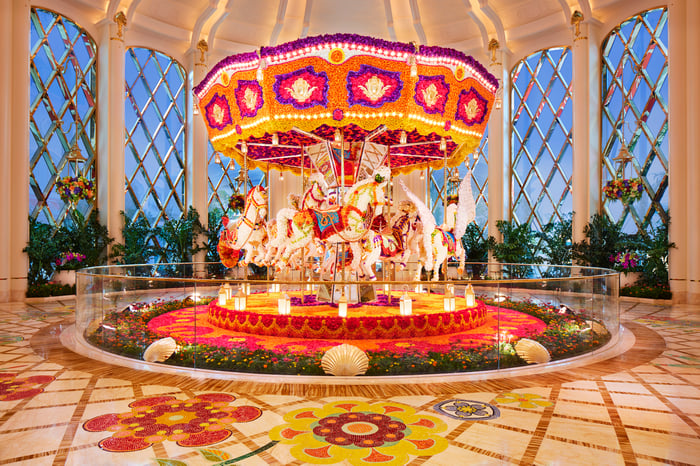 When Wynn completed the $4.2 billion Wynn Palace last year, it was the company's biggest bet on gaming in Macau. And the biggest risk was that it wouldn't generate enough money to justify the investment, a particular worry at the time because at the time, Macau's gaming market was still in decline. To make matters worse, the resort was only allocated 150 gaming tables, well below the 400 it wanted. By comparison, Venetian Macau has 550 table games, and Sands Cotai Central has 404, so the allocation was a big disadvantage.

But Wynn Palace has held its own, generating $111.9 million in adjusted EBITDA in the first quarter, despite construction surrounding the building. And if it can gain market share, it could be much more profitable in the future.

Venetian Macau generated $1.11 billion in EBITDA in the last year, and Sands Cotai Central generated $595.7 million, which are the bars Wynn Palace will be compared to. If it's gaining market share, I think a range of $600 million to $800 million in annual EBITDA would be reasonable, more than justifying the construction cost of the resort.

Bad news for everyone else

If Bernstein is right, and Wynn is gaining market share in Macau, it would be bad for Las Vegas Sands, Melco, and MGM. Steve Wynn typically has the most profitable resort in every location he builds, and stealing even a few percentage points of market share in Macau could pull hundreds of millions in annual revenue from competitors.

The good news is that Macau may be growing again. So, even if Wynn is taking market share, we may see competitors be able to generate flat revenue in Macau. And that would be good considering the increase of supply over the past year in the region.

Wynn may have room to run higher

Depending on how high Wynn's market share goes in Macau, the stock could have a lot higher to run. Macau's growth is a huge tailwind, and so is any gain in market share at Wynn Resorts. If these reports are true, the stock could have much higher to run, and we may even see Wynn decide to up its dividend again. And that could further supercharge an already hot stock in 2017.