Shares of Genesco Inc. (NYSE:GCO) were getting slammed today after the diversified apparel company posted disappointing results in its first-quarter report for fiscal 2018. 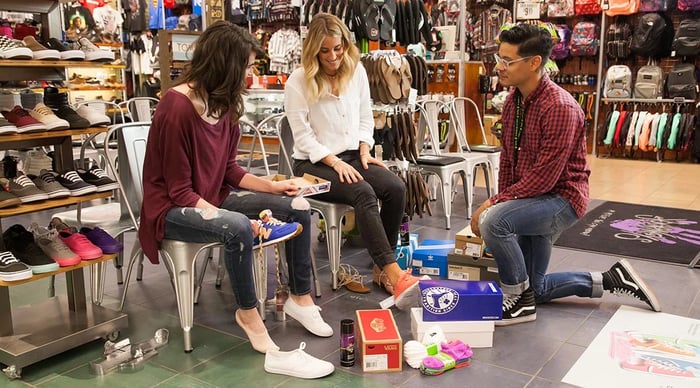 In the quarter, Genesco, the parent of brands including Johnston & Murphy shoes and the Lids chain of hat stores, was battered by the same challenge other apparel retailers are facing -- declining physical-store traffic. Comparable sales fell 1% and comparable-store sales, which exclude e-commerce and catalog sales, were down 4%. Overall revenue declined 0.8% to $643.4 million, which was short of estimates at $645.8 million.

Results on the bottom line were significantly worse as profits fell from $0.62 a share a year ago to just $0.06, which badly missed the analyst consensus estimate at $0.28 a share. Performance was particularly weak at the Journeys chain, where comparable sales fell 5%.

CEO Robert Dennis said the report reflected "a number of challenges," including "weak store traffic," which the company blamed in part on a delay in tax refunds and "the impact from significant fashion rotation at Journeys."

Looking ahead, the company said the recovery at Journeys, which is its biggest segment and makes up nearly half of its revenue, would take longer than expected. It also lowered its adjusted earnings guidance from $4.40-$4.55 a share to $3.90-$4.05 range. However, Dennis said comps were trending better in the second quarter, and expressed optimism about the rest of the year.

It's clear why the stock sold off today based on the results and guidance, but if management can succeed in stabilizing the business, the stock offers some value at a P/E less than nine, based on the updated guidance.