Please ensure Javascript is enabled for purposes of website accessibility
Log In Help Join The Motley Fool
Free Article
Join Nearly 1 Million Premium Members And Get More In-Depth Stock Guidance and Research
By Eric Volkman – May 26, 2017 at 8:28AM

Take-Two Interactive pushes back the debut of the highly-anticipated game to spring 2018.

Video gamers who are fond of Western-themed titles will have to wait a little longer for the latest big-ticket one. Take-Two Interactive's (TTWO 0.20%) Rockstar Games announced that the release of Red Dead Redemption 2, the highly anticipated sequel to its popular Western game, has been postponed until spring of next year. It was originally slated to be released this fall. 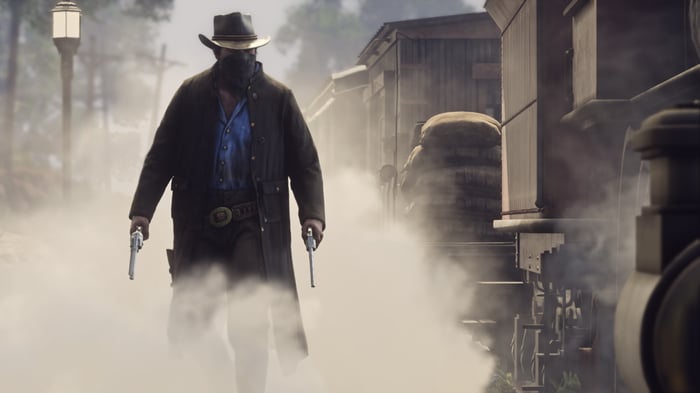 The Take-Two division explained that the delay is because "some extra time is necessary to ensure that we can deliver the best experience possible for our fans."

Read Dead Redemption 2 is being developed "from the ground up" for the current generation of consoles, rather than being ported over from earlier technology, as in the case of Take-Two/Rockstar's Grand Theft Auto V.

No investor likes to hear that a key product from their company is being postponed. Like the loser in a saloon brawl, Take-Two's stock was pummeled following the announcement of the Red Dead Redemption 2 news.

It soon recovered, though, when the company released its Q4 and full-year 2017 results. These were, to put it mildly, very encouraging. Net revenue grew by over 50% on a year-over-year basis to nearly $572 million, while net income doubled and then some to $99 million. Both figures crushed the average analyst estimates.

These days, the video-game industry isn't as dependent as it once was on sales of new titles. Nearly one-quarter of Take-Two's Q4 derived from recurring revenue -- add-on content and the like -- for existing games.

Considering that, investors shouldn't worry about the Red Dead Redemption 2 postponement. In fact, they should rather be encouraged that Take-Two/Rockstar is devoting the time to get the game in better shape, as opposed to rushing it to market. After all, the company is doing very well drawing revenue and netting profit from its numerous other sources.