Please ensure Javascript is enabled for purposes of website accessibility
Log In Help Join The Motley Fool
Free Article
Join Nearly 1 Million Premium Members And Get More In-Depth Stock Guidance and Research
By Dan Caplinger – May 26, 2017 at 9:03AM

But are any of them worth buying?

Value investors like stocks whose share prices are relatively inexpensive compared to their earnings potential. By focusing on stocks with low price-to-earnings ratios, many value investors uncover stocks that have been unfairly punished by the market at large. However, in many cases, stocks that have low P/E ratios have a good reason for trading where they do, making some of them serious value traps. Below, you'll find the 10 stocks in the S&P 500 that have the lowest trailing earnings multiples, along with some discussion about whether they're actually good bargains for value investors going forward.

We can dispense with some of these stocks very quickly, based on known facts that make their trailing earnings multiples misleading. In the case of eBay, Transocean, and Corning, current earnings have been inflated to some extent, and investors fully expect that future earnings will be lower. Both eBay and Corning have forward earnings multiples in the teens, and most investors actually expect Transocean to post a loss in the near future, rendering its P/E ratio meaningless.

Highly sensitive company-specific news is also a cause for some of these stocks to trade at these levels. Signet, for instance, has had to deal with controversy related to allegations of sexual harassment and wage disparities within the company, and its most recent results included an 11.5% plunge in same-store sales from year-ago levels. That's enough to make some investors hesitate going forward.

One group of stocks on this list has low P/E ratios in large part because investors see their respective industries near the high point of the business cycle. General Motors has enjoyed the benefits of record auto sales in the industry in 2015 and 2016, but few think that its upward trajectory can continue. Similarly, Gilead Sciences has seen huge long-term growth from its stable of treatments for diseases like HIV, but many are concerned that the loss of patent protection on key products will result in an inevitable sales decline that will affect the bottom line as well.

The key for such stocks is to recognize that when the low end of the cycle hits, their P/E ratios will look extremely high. It's important to get familiar with the range of earnings ratios throughout the cycle. That way, when you see extremely low values like this, you won't overreact, because you'll know that when industry conditions return to more normal levels, P/Es will be more reasonable.

Another group of stocks on the list reflect the challenges that companies face in particular industries. Bed Bath & Beyond and Michael Kors are dealing with tough conditions in retail, and they've had difficulty fending off competition from e-commerce specialists while also struggling to retain their leadership roles in their respective niches. If they can retrench and find ways to grow, then their share prices should recover, but they first have to find answers to the competitive threats they face.

Similar issues apply to other companies. Navient provides servicing and collection help on student loans, and the combination of a rising rate environment and greater attention on the student-loan problem could put pressure on Navient going forward. 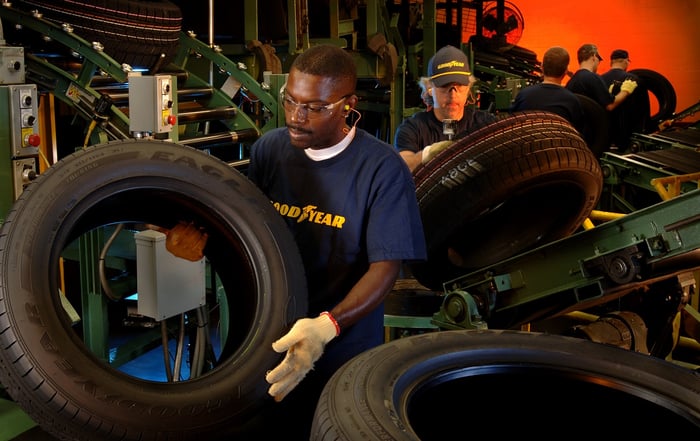 In that light, Goodyear Tire & Rubber is arguably the most interesting company among these 10 low P/E stocks. Goodyear has ambitious goals for the near future, including plans to boost operating margin, free cash flow, and dividends over the next several years. Although many investors note that most of the company's revenue comes from tire replacement -- something that doesn't necessarily offer much room for long-term growth -- Goodyear has done a good job of gaining first-mover status in China. For nearly a quarter-century, Goodyear has worked to grow in the world's second-largest economy, and decisions to expand its factory presence in China should pay off with a greater portion of global sales coming from the most populous nation in the world by the end of the decade. If you believe in that growth story, then current P/E levels look extremely low for Goodyear.

Just because a stock has a low earnings multiple doesn't make it a bargain. By understanding the reasons why a stock has a low P/E, you can better assess whether the company really deserves a place in your investment portfolio.

Why Shares in Goodyear Slumped 20% This Week

Why Goodyear Stock Is Falling Today

Why Shares of Goodyear Are Soaring This Week
413%