No one likes market crashes. Even the best stocks often get swept up in the panic. Whether a market crash is on the horizon is unpredictable, but investors can position themselves defensively by owning quality dividend stocks that hold up better than most when things take a turn for the worse. Here's why Johnson & Johnson (NYSE:JNJ), Clorox (NYSE:CLX), and Amgen (NASDAQ:AMGN) are good bets for risk-averse investors.

Brian Stoffel (Johnson & Johnson): I'm not sure if there's such a thing as a recession-proof dividend stock, but Johnson & Johnson is surely a recession-resistant one. The company has three divisions: consumer products like Band-Aids and Tylenol, medical equipment, and pharmaceuticals.

If you sit back and think about it, while people or hospitals may cut back on spending when the economy falters or the market crashes, they surely won't give up such purchases altogether. That's because they're vital no matter the economic climate.

Indeed, between 2008 and 2010, overall company sales fell just 3.4%. That helps explain how the company's stock outperformed the S&P 500 by 22 percentage points from January 2008 to the depths of the stock market's crash.

If a market crash occurred today, investors could laugh it off. Johnson & Johnson's dividend is very safe, with only 61% of free cash flow being used to pay it over the past 12 months. Given the other dynamics covered above, that makes it a great holding for the risk-averse to consider.

Tim Green (Clorox): A company that sells products with strong brands that people need to buy is often a good bet in the event of a market crash. Clorox, known for its namesake bleach as well as Glad trash bags and cling wrap, Brita water filters, and Liquid Plumr, barely felt the last great market crash in 2008. The stock dropped a bit, but it remained relatively unscathed compared to the broader market. 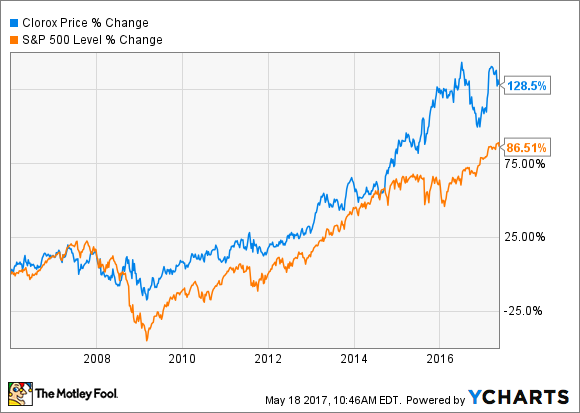 Clorox is not a cheap stock, and the company isn't growing very fast, as I pointed out last month. The dividend yield of around 2.6% is higher than that of the S&P 500 Index, but dividend growth will almost certainly be sluggish going forward.

That doesn't mean that Clorox isn't a solid company, though. Despite competition from cheaper store-brand alternatives, the company didn't miss a beat during the financial crisis, with revenue growing and margins feeling little pressure. A combination of good products and some great brands prevented consumers from switching away from Clorox's products.

I wouldn't expect great returns from Clorox stock going forward, considering its valuation and minimal growth prospects. But if you want something stable and unlikely to fall apart when the stock market or the economy turns south, Clorox is a pretty good choice.

Beating the market with science

Cory Renauer (Amgen): Investors looking for crash-resistant dividend stocks should consider this blue-chip biotech. While stocks in this industry aren't generally famous for steady dividend growth, Amgen has hiked its payout regularly since it began making them in 2011. Those hikes have been substantial as well, rising at a 48.2% annual rate over the past five years.

Although Amgen wasn't paying a dividend during the last big market crash, it's performance during the Great Recession was outstanding. Between the beginnings of 2008 and 2009, the biotech stock rose 23.9% while the benchmark SPDR S&P 500 ETF fell 37.7%.

It isn't every year that this purveyor of pricey biologic drugs beats the broader market by more than 60 percentage points, but Amgen has continued to outperform the market from the beginning of 2009 through the present.

Looking into the company's recent performance, and development pipeline, there could be more market-beating gains and dividend growth ahead. Although first-quarter revenue came in 1% lower than the year-ago period, cost-cutting and stock buybacks allowed adjusted earnings to rise 9% to $3.15 per share. The company also recently announced clinical trial results that show its experimental therapy, erenumab, significantly reduces monthly migraine headaches.

At recent prices, the stock offers a nice 2.9% yield that you can reasonably expect to continue growing. The company generated $2.2 billion in free cash flow during the first quarter but used just $847 million to make dividend payments during the three-month period. If approved, erenumab could generate more than $2 billion in annual sales at its peak, which, when combined with leaner operations, could give Amgen plenty more cash to continue raising payments -- even if the broader market tanks.