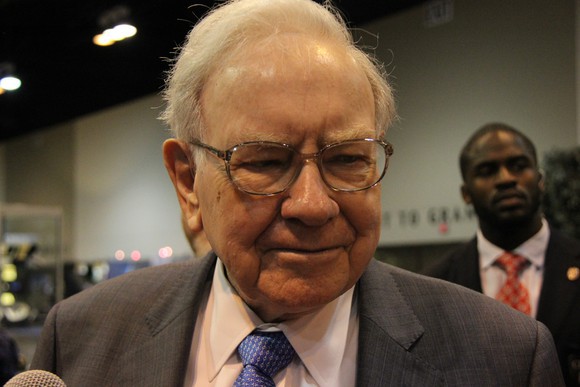 At Berkshire Hathaway's (NYSE:BRK.B) annual meeting earlier this month, an investor asked Warren Buffett about the company's shift from investing in high-return, asset-light businesses to capital-intensive businesses, such as railroad operator Burlington Northern. Whether this shift is actually occurring or not can be argued, but Buffett agreed with the questioner about the idea of investing in businesses that return gobs of capital with minimal investment. He said, "Buying a high return on assets, very light capital-intensive business that's going to grow beats the hell out of a business that requires a lot of capital to grow."

This isn't the first time that Buffett has expressed his fondness for a business with high returns, low capital requirements, and high growth. However, after reiterating his ideal business characteristics, Buffett's followers are likely clamoring to find the next company that matches a few of the Oracle's investing criteria. Let's see if Cognizant Technology (NASDAQ:CTSH) fits the bill.

Cognizant is in the IT services business, providing consulting and professional services to a variety of clients. With over 260,000 employees, its greatest assets are its people rather than equipment or software. As a result, Cognizant has been able to generate gobs of cash.

Despite the dip in 2016, Cognizant's management has done a solid job generating cash. The company also recently began paying a $0.15 per share dividend and announced a plan to return 75% of its free cash flow to shareholders, through either share buybacks or dividends.

While free cash flow is a great metric to analyze a company's performance, a better measure to see if management is adding value is return on equity (ROE). Over the trailing 12 months, Cognizant's ROE came in at 16.5%. While impressive, the downward decline over the past five years is concerning. 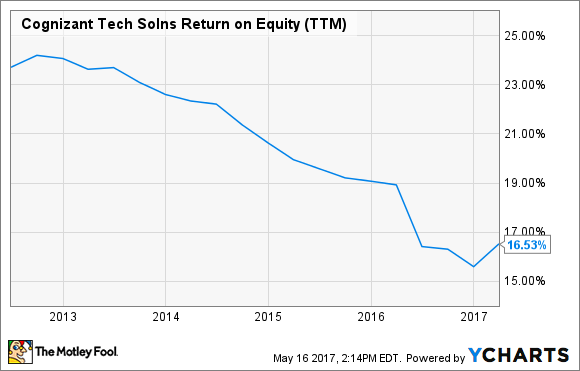 A declining ROE is often a sign of either increased competitive pressures or that the company is earning less and less on each dollar invested by its shareholders. A lack of value-added investment opportunities may also be the reason for the company's new shareholder return program. On a positive note, in its most recent quarter ending in March, Cognizant's ROE increased to 22.3%. Assuming the bump is not a head fake, an increasing ROE combined with a strong capital return program can be a boon for Cognizant shareholders.

How is the growth?

High returns on assets with low capital requirements are often a recipe for a solid investment. However, if you can combine those two traits with high growth, you may be looking at a great investment. Let's see where Cognizant stands in terms of growth.

According to data from S&P Capital IQ, Cognizant has grown its revenue at 17.1% annualized over the last five years. Earnings and cash flow growth didn't come in as strong but are fairly solid at 12.3% and 13.8%, respectively, over the same period. Despite strong growth over the last half decade, growth has slowed more recently as the company has matured. In its latest quarter, revenue growth slowed to 10.7%.

Despite the slowing growth, Cognizant is not resting on its laurels. The company has been aggressively making acquisitions in the fast-growing digital technology space, gobbling up smaller consultant firms like Idea Couture, Mirabeau, and Adaptra. On March 1, Cognizant made its seventh acquisition in just one year by purchasing Japan-based Brilliant Service Co. Ltd.

Cognizant appears to meet Buffett's criteria of achieving high returns, having low capital requirements, and growth. However, there are some concerns about declining returns and slowing growth. That growth also appears to be more and more dependent on acquisitions. Additionally, given Cognizant's footprint in the technology space, I wouldn't exactly call the IT services company an ideal Buffett investment.