This Apple supplier could still have room to run after its recent rally.

It's been a great year for Skyworks Solutions (SWKS -0.79%), which supplies power amplifiers, front-end modules, and RF chips to a wide variety of markets. The company has soundly beat top and bottom line expectations for four straight quarters, and its stock has rallied more than 60% over the past 12 months. But looking ahead, Skyworks could still have room to run for five simple reasons.

Skyworks supplies its chips to the mobile, automotive, broadband, wireless infrastructure, home automation, industrial, and military markets. But its biggest customer by far is Apple (AAPL 2.44%), which contributed 40% of its revenues in fiscal 2016.

This makes Skyworks a great supply chain play on the upcoming iPhone 8. Stifel Nicolaus analyst Aaron Rakers estimates that Apple will sell 224.7 million iPhones this year and 250.6 million units in 2018 -- which would represent an impressive rebound from its first annual decline in 2016.

As the technology in smartphones improves, the number of power amplifiers, front-end modules, and RF chips per device increases. For example, an iFixit teardown of the iPhone 6s revealed two Skyworks components inside, while the iPhone 7 teardown found four components.

Just over a year ago, Skyworks reported that it had a content share of $1 to $2 per 3G device, more than $3 per 4G device, and over $5 per "advanced" 4G device. But during last quarter's conference call, CEO Liam Griffin declared that certain high-end 4G devices were "approaching $8 to $10 in value," spurred by the growing use of its SkyOne, DRx technology, and DC/DC technologies. Huawei, in particular, notably packed ten Skyworks modules into its latest Honor smartphones: 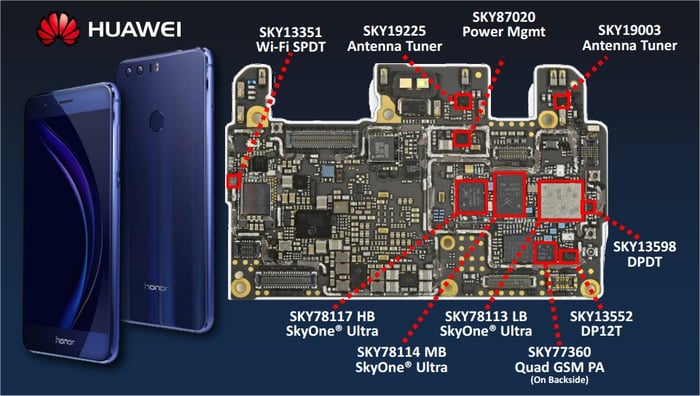 The main theme here is that fancier smartphones on faster networks will constantly boost Skyworks' average content share per device. The smartphone market may seem saturated today, but Ericsson (ERIC -1.50%) Mobility estimates that the total number of mobile smartphone subscriptions worldwide will still rise from 3.9 billion in 2016 to 6.8 billion in 2022.

Within that total, Ericsson expects 4G/LTE subscriptions to rise from 1.9 billion to 4.6 billion, and for 5G subscriptions to grow from nothing today to 540 million. This represents a huge long-term growth opportunity for Skyworks, as smartphone volumes grow and its content share per device increases.

4. The Internet of Things is expanding

But over the next few years, Skyworks expects its dependence on Apple and other smartphone makers to wane as the total number of connected devices across the Internet of Things (IoT) surges. Skyworks believes that there will be over 25 billion connected devices worldwide by 2020 -- a figure which would easily dwarf the smartphone market.

The RF module market generally isn't considered a high-margin one, but Skyworks' gross margins have gradually expanded over the past few years as it scaled up its operations. 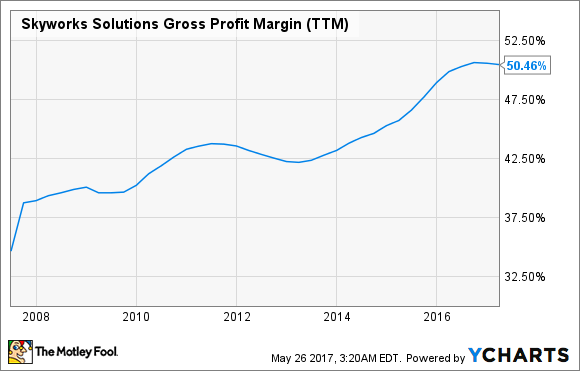 That margin expansion, along with robust gains in shipment volumes and content share, are expected to boost the company's top and bottom lines for the foreseeable future. Analysts expect Skyworks' revenue to rise 11% this year and another 10% next year. On the bottom line, its earnings are expected to rise 13% this year and another 14% in fiscal 2018.

Should you buy Skyworks today?

I previously highlighted Skyworks as one of the best Apple supplier plays on the market, and I still stand by that assessment. It's also a solid long-term play on the Internet of Things market. To top it off, Skyworks' current P/E of 22 is lower than the industry average of 26 for semiconductor makers, and it pays a forward dividend yield of 1.1%.

I believe those facts make Skyworks a compelling buy at current prices, but investors should still fully evaluate the risks -- like an unexpected drop in iPhone sales or emerging competitors in the RF space -- before buying any shares.