Back in March, I discussed five reasons that IBM (NYSE:IBM) could benefit from a change in management. I noted that its revenue declines wouldn't end anytime soon, that the growth of its key "strategic imperatives" was slowing down, that it remained an underdog in the cloud race, that it was too dependent on outsourcing, and that it wasn't being upfront about its layoffs.

While those are still valid points, we should acknowledge that Ginni Rometty was dealt a tough hand when she became the company's ninth CEO in 2012. So today, we'll examine some of Rometty's biggest moves, and whether or not they actually moved IBM in the right direction. 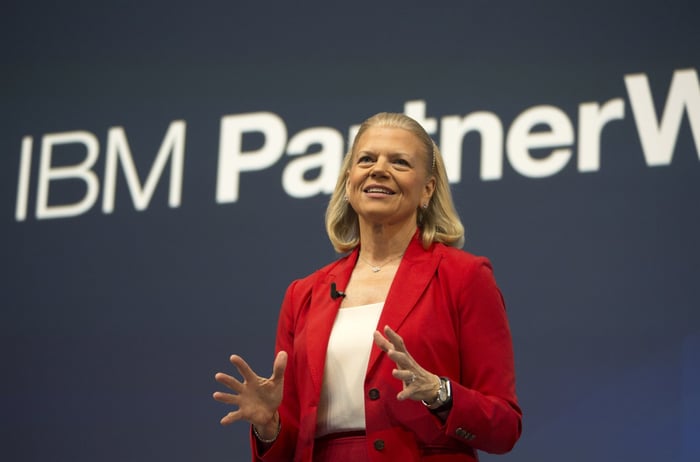 Former CEO Sam Palmisano -- who led IBM from 2002 to 2011 -- arguably set the company on the wrong path in 2010, when he boldly promised to double its annual earnings per share from $10.01 in 2009 to $20 by 2015. That proclamation was so impressive that Warren Buffett, who famously avoided tech stocks, made it one of Berkshire Hathaway's top holdings.

The problem was that Palmisano's "Roadmap 2015" plan mainly consisted of selling big business units (like its PC business, which it sold to Lenovo in 2004), aggressively cutting costs, and repurchasing stock. That conservative strategy boosted IBM's earnings but caused it to fall behind the tech curve as rival companies -- like Amazon (NASDAQ:AMZN), Microsoft (NASDAQ:MSFT), and Alphabet's (NASDAQ:GOOG) (NASDAQ:GOOGL) Google -- invested heavily in cloud-based platforms.

When Rometty took over, she initially followed Palmisano's playbook by cutting costs, laying off employees, and dumping lower-margin business units. The company even paid GlobalFoundries $1.5 billion to take over its money-losing chipmaking business, and its debt levels surged as it funded more buybacks with debt.

But in late 2014, Rometty wisely abandoned Palmisano's $20 per share target. This decision finally gave Rometty the freedom to pursue more acquisitions in the higher-growth cloud and mobility markets.

Laying down the foundations of its "strategic imperatives"

Even before she scrapped Roadmap 2015, Rometty realized that IBM had fallen far behind Amazon, Microsoft, and Google in public cloud platforms -- which lend out storage space, computing power, and development tools to companies and developers.

That's why Rometty had IBM acquire cloud infrastructure giant SoftLayer Technologies for $2 billion in 2013. She followed that purchase with dozens of other takeovers of businesses in the cloud, analytics, mobility, security, and social industries -- the five pillars of growth which became IBM's "strategic imperatives".

Revenue from those businesses rose 12% annually last quarter and accounted for 42% of IBM's top line over the past 12 months. Without Rometty's guidance, this new category of higher-growth businesses might not even exist.

The following year, IBM launched dedicated units for the Internet of Things (IoT) and Education markets -- which expanded its big data and analytics reach into both industries. It also launched Watson Health, a dedicated unit for gathering and analyzing healthcare records from millions of devices. The company is also currently expanding its presence in the cybersecurity, quantum computing, and blockchain markets -- which could widen its moat against its biggest rivals.

After abandoning Palmisano's plan, Rometty finally weaned IBM off its addiction to debt-fueled buybacks, as seen in the following chart: 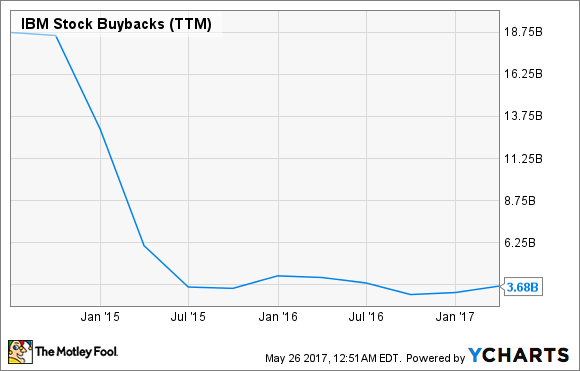 This bold move caused IBM's annual earnings to drop 10% in 2015 and 9% in 2016, but those declines were arguably necessary to allow the pursuit of other investments and acquisitions. Looking ahead, analysts expect IBM's cost-cutting plans, stabilizing (albeit stagnant) revenues, and investments in higher-margin businesses to lift its earnings by 1% this year and 2% next year.

So should investors blame the management?

Shares of IBM have declined 8% this year, while the S&P 500 has gained 8%. The reasons are easy to see -- the company's revenue has fallen annually for 20 straight quarters, Warren Buffett sold about 30% of Berkshire's stake in February, and Moody's downgraded its credit rating in early May.

Amid all those negative headlines, it's easy to blame IBM's management for its current woes. However, it makes more sense to blame former CEO Sam Palmisano for most of those problems. Rometty initially waited too long to abandon Palmisano's quixotic plan, but her moves over the past three years indicate that she knows how to turn around the aging company. Therefore, investors should keep those facts in mind before assuming that IBM would fare better under new management.