The public has spoken, and by an overwhelming majority, it prefers for its phones to not explode.

That's something Samsung (NASDAQOTH: SSNLF) acknowledged when it removed its Note 7 from store shelves and recalled the phone from any customers who had already bought one. Of course, those moves were nudged along by various United States government agencies that wanted the Note 7 off the market because of its exploding battery problems.

During the height of the controversy, as it literally became a crime to bring a Note 7 on a plane, Samsung had pledged to dispose of the phones, promising not to repair or refurbish them, The Verge reported. That seemed like a smart strategy because even a safe, fixed Note 7 would conjure up bad memories from customers.

In a similar way, it's why no cruise ship company has used the name Titanic. Associations with a past disaster certainly don't help products, but as Samsung launches its new Galaxy S8, it's also rolling back some of its earlier promises on getting rid of the Note 7. 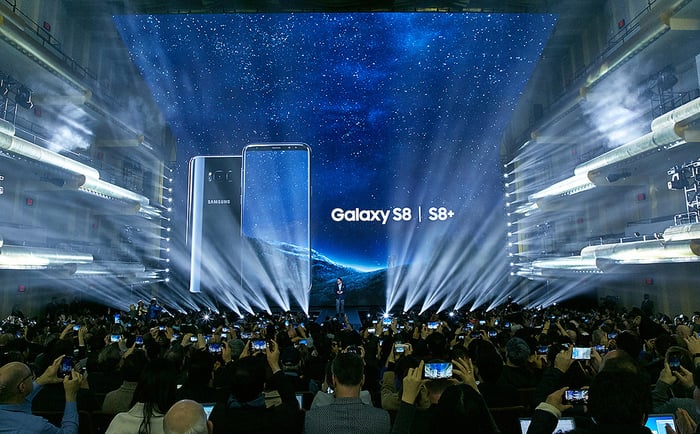 What is Samsung doing?

Instead of destroying any remaining Note 7 phones and burying them in a landfill where they can never be found, Samsung now plans to refurbish the phones. The company made this clear in a press release, where it laid out how it would use the repaired phones, with the first of three principles it lays out being the most important.

"First, devices shall be considered to be used as refurbished phones or rental phones where applicable," the company wrote.

That's Samsung directly saying it's going to put Note 7s, albeit repaired and safe ones, back into the marketplace. The company also plans to detach salvageable components from phones it's not going to use as rentals or sell as refurbished.

Samsung did try to make it clear in the press release that it was working with the appropriate authorities before putting the phones back on the market:

Regarding the Galaxy Note 7 devices as refurbished phones or rental phones, applicability is dependent upon consultations with regulatory authorities and carriers as well as due consideration of local demand. The markets and release dates will be determined accordingly.

This may be the fiscally prudent move for Samsung as a way to recover some of the billions (estimates ranged from $5 billion to $17 billion) in combined lost sales and recall-related costs, but it's not a smart public relations move. Everything the company is doing is almost certainly safe for consumers, but it's hard to get past the optics of putting a once-exploding phone back on the market.

What does this mean for Samsung?

While the company is not really doing anything wrong, and it's clearly not putting people in danger, these moves do remind consumers of the past problems. That may not matter once the S8 has successfully been on the market for a while, but in these early days of its release, Samsung may be doing itself a disservice by creating news that links back to the Note 7 debacle.

In the end, though, Samsung will be judged based on its ability to move past this scandal. The company has put new testing and safety procedures in place, and it seems very unlikely it will release another phone with an exploding battery ever again. As time passes, the Note 7 may remain a punchline, and having refurbished versions of it floating around may extend the joke, but it's unlikely to be a major drag on Samsung in the long term.