Excuse the pun, but are you seeking to "branch" out from the most familiar banking names, and into smaller companies with perhaps better growth opportunities? In this article, I'll examine two compelling bank stocks you may be overlooking. Hardly household names, Bank of the Ozarks (NASDAQ:OZK) and F.N.B. Corporation (NYSE:FNB) are both community banks characterized by rapidly expanding asset bases and reasonable valuations.

Bank of the Ozarks: Efficient and profitable growth

Headquartered in Little Rock, Arkansas, Bank of the Ozarks is a bank holding company conducting business in nine Southern states, as well as in New York and California. Operating under the single segment of community banking, the bank has grown through aggressive branch openings as well as through purchases -- it's completed no fewer than 15 acquisitions since 2010.

The bank enjoyed a record year in 2016, increasing its total asset base by 91% to $18.9 billion, primarily through the acquisition of Florida-based C1 Financial and Georgia-based Community & Southern Holdings.

Profitable and efficient operations are defining characteristics of this company. Bank of the Ozarks recorded net interest margin (i.e., the difference between total interest income and interest paid to lenders and depositors) of 4.88% in its most recent quarter. This is almost 2 percentage points above the average net interest margin for all banks -- approximately 3.1% in the first quarter of 2017, according to the Federal Reserve Bank of St. Louis.

Bank of the Ozarks achieved an operating efficiency ratio (noninterest expenses divided by net revenue) of 35% last quarter. This measure of how efficiently a bank can uses its income-generating assets is typically thought to be optimized at around 50%, so Bank of the Ozark's significantly lower ratio is quite impressive. Coupled with the bank's high net interest margin, the efficient use of assets lifts overall profitability. The organization posted a net profit margin of nearly 39% in 2016.

For all its attractive characteristics, an investment in Bank of the Ozarks isn't risk-free. The company has a revenue concentration investors should be aware of: It's very heavily invested in commercial real estate loans. Per CEO George Gleason, the company's Real Estate Specialties Group loan portfolio comprised 93% of the unfunded balance and 70% of the funded balance of the bank's total non-purchased loans and leases as of the end of the first quarter of 2017.

However, this concentrated income stream is notable for its quality. The bank is adamant about taking a "first," or secured, position in commercial real estate loans. The real estate portfolio's average loan to appraised value reflected very low leverage of 41.8% last quarter. In addition, loan losses have historically been quite low, which manifests itself in the bank's overall non-performing-assets-to-total-assets ratio of just 0.25% in the last quarter.

Bank of the Ozarks has enjoyed a spectacular run for a banking stock. It has dusted most of the banking industry with a 240% total return over the last five years (its dividend currently yields 1.5%). But the stock's volatility has increased over the last 17 months, and since January of 2016, total return has actually declined by just over 3%.

By book value, Bank of the Ozarks is a bit pricey, carrying a price-to-book ratio of 1.9. But the company's strong earnings growth through its acquisition strategy supports an investment case: The bank's one-year forward price-to-earnings ratio stands at just 12.8. If you can weather some volatility, Bank of the Ozarks promises more long-term appreciation ahead. 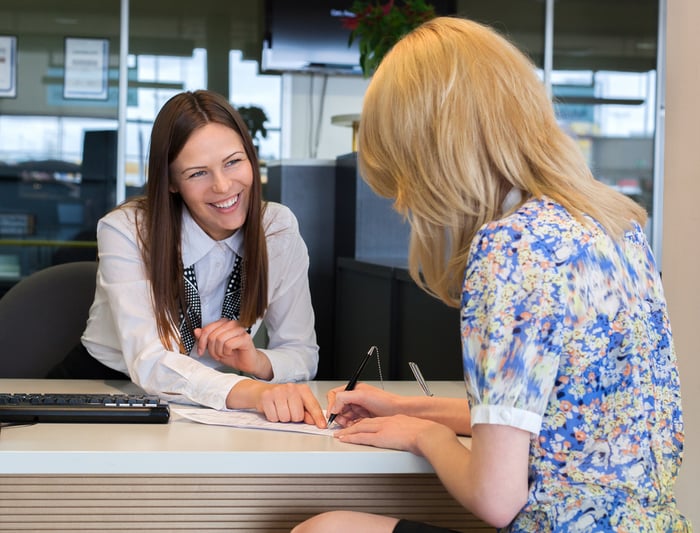 Like Bank of the Ozarks, F.N.B. employs a growth strategy balanced between organic growth and acquisitions. The company grew its asset base by 24% in 2016, through internal growth and the purchase of 15 Pennsylvania branches of Fifth Third Bank, as well as the acquisition of Pennsylvania bank Metro Bancorp. F.N.B. ended 2016 with $21.8 billion in total assets.

This spring, F.N.B. completed its largest ever merger, the acquisition of Raleigh, North Carolina-based Yadkin Financial Corporation, pushing its total assets to nearly $30 billion. The purchase extends F.N.B.'s regional footprint into the Southeast region and gives it presence in high-growth North Carolina cities including Raleigh, Charlotte, Durham, and Greensboro.

F.N.B. sports fairly robust metrics for a community bank. The company reported a solid efficiency ratio of 57.2% as of its most recent quarter, and net interest margin of 3.3%. F.N.B.'s aggressive expansion is also bumping up the size of profits in absolute terms -- net interest income leaped 26% to $161.9 million versus the prior year in the company's most recently reported quarter.

Look for the company to improve these metrics and increase profits as it shifts strategy in the near term to reaping the benefits of recent acquisitions. On the company's most recent conference call, CEO Vince Delie detailed F.N.B.'s game plan for at least the next year:

[W]hile we've been a prolific acquirer, it was done to position the company to drive organic growth and to drive organic growth in a way that lets us maintain the risk profile of the company without taking extreme risk in any particular geography or any asset class. I think we've accomplished that with our M&A [mergers and acquisitions] strategy. I think we now have significant scale. We have a tremendous group of employees, many of which are from larger institutions. We've built out our capital markets platform. We've built out our fee-based businesses. And it's now time for us to deliver on the acquisitions that we've made.

This focus on organic growth and profit optimization may bode well for F.N.B. stock. Over the last five years, F.N.B. has generated a total return of 50.5%, thus averaging a total return of a little over 10% per year. Similar to Bank of the Ozarks, F.N.B. carries a forward price-to-earnings ratio of 12, and an attractive price-to-book ratio of 1.

In sum, F.N.B. shares have done well, but could arguably appreciate more sharply over the next few years, as investors recognize its earnings growth potential. Best of all, F.N.B. offers a dividend that presently yields 3.6%, providing a nice boost to total return in the meantime.