You know Tesla (NASDAQ:TSLA) as a builder of electric cars. But that's not necessarily what the company is about in the long run.

The electric car thing has become a temporary stop on a longer and much more ambitious journey, as Tesla's mission has since expanded beyond just sustainable transportation. Tesla CEO Elon Musk wants to change the world, and that includes getting people used to replacing gas-powered vehicles with electric cars.

This is not speculation on my part, or even a closely guarded secret. Musk laid out his master plan in some detail 11 years ago, and doubled down on the same theme last year.

In short, Tesla was always meant to develop and promote sustainable energy sources for everyone and everything. The expensive Tesla Roadster sports car only aimed at raining the capital to develop more affordable electric cars for a larger mass-market demographic -- and even the Tesla Model S and Model X are just cash-generating stepping stones on the road to a clean-energy revolution.

Along the way, Musk is using Tesla's capital platform and wide-ranging media reach to introduce and popularize other technologies for the good of humanity. Self-driving cars will make the road a safer place, while saving even more energy. Taking emotions and human error out of the driving experience can do both of those things.

Tesla's early forays into electric vehicles and self-driving cars got the ball rolling. Now, Detroit and Japan are falling all over themselves to beat Tesla at its own game.

General Motors (NYSE:GM) built the Chevy Bolt from the ground up as a fully electric vehicle, and is infusing that platform with self-driving smarts as we speak. Nissan's (OTC:NSANY) Leaf is arguably a more consumer-friendly electric car than any of the models Tesla has introduced so far, and the Italian-Japanese auto empire is building its self-driving future on that platform.

These are just a couple of examples in a rising sea of self-driving and electric vehicles around the world. In a very real sense, this means that Tesla has done its job. People are getting used to the idea of gasless cars in their garages, and should adjust quickly when computers start taking the wheel on a regular basis, as well. 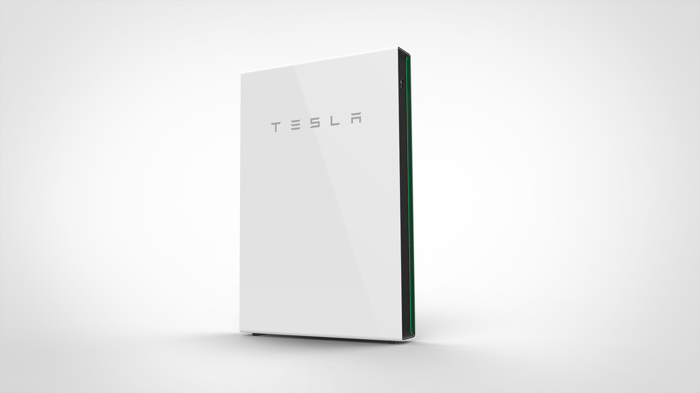 The Powerwall battery pack isn't as sexy, but this is where Tesla is going in the long run. Image source: Tesla.

Is there a business case for making that drastic turn?

Yes, the teeming range of rivals will keep Tesla from dominating the global car market. That's fine with Elon Musk. That was never the intention, anyway.

Did you notice that the company dropped "Motors" from its official name three months ago? It was done with little fanfare, and the company had already gone without the full Tesla Motors moniker for a while in press releases and other marketing materials.

Apple did something similar in 2007. On the same day that Apple introduced the first iPhone, it also changed its corporate name from "Apple Computer, Inc." to the current "Apple, Inc." It was a call to arms, announcing Cupertino's intention to spread its wings from the Macintosh computer business, and become something else. Today, Macs account for just 11% of Apple's quarterly sales, while iPhones and iPads generate 70% of the total revenue flows.

I wouldn't be surprised to see Tesla driving down the same road over the years. Come back in 2027, and the car business may very well be a fading side project, while Tesla refocuses on solar power and next-generation battery technologies. That end game is right in line with Elon Musk's stated goals, and it's a game-changing ambition on a planetary level.

If Musk's big dreams turn out to be too lofty and ambitious, you'll still see Tesla as a car company in 10 years. And that would be a failure.

Electric Cars Are the Story Now, but Battery Power Is the Future for Tesla Inc. @themotleyfool #stocks $TSLA $GM $NSANY Next Article
Current