Please ensure Javascript is enabled for purposes of website accessibility
Log In Help Join The Motley Fool
Free Article
Join Nearly 1 Million Premium Members And Get More In-Depth Stock Guidance and Research
By Reuben Gregg Brewer – May 30, 2017 at 10:13AM

The midstream space covers a lot of ground, literally and figuratively. In Magellan's case, that means nearly 12,000 miles of pipes, storage facilities, and terminals. Its focus is on moving and storing refined products (approximately 60% of 2016 operating margin), moving oil and storing oil (about 30%), and storage at marine terminals (10%). Magellan has key storage operations at terminals along the Gulf Coast, the Mid-Atlantic, and New England. It is also one of the largest storage providers in Cushing, Oklahoma, a vital U.S. oil hub. 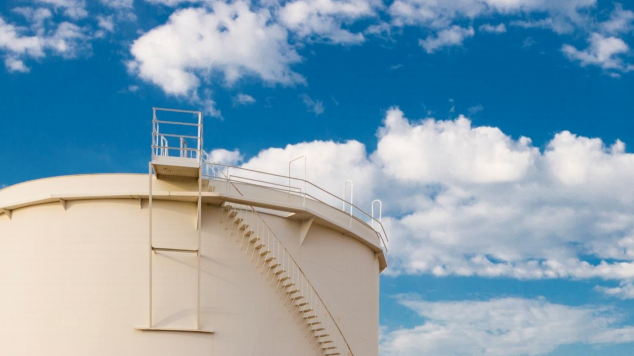 There are a couple of important nuances here. For starters, roughly 85% of its revenue in 2016 was fee-based. That means the vast majority of its top line is derived from the use of its system. Thus, the often-volatile price of oil and gas isn't nearly as important as demand for oil and gas and the various products they get turned into. Magellan expects that 85% figure to hold up over time.

That provides a solid foundation for the partnership's roughly 4.7% distribution yield. The distribution, meanwhile, has been increased 60 times since Magellan went public in 2001. Its annual streak of increases is up to 17 years. That's not far behind Enterprise Products Partners and Buckeye Partners, which have hiked theirs for 20 and 22 years, respectively. No doubt Magellan is in impressive company.

How does it grow? 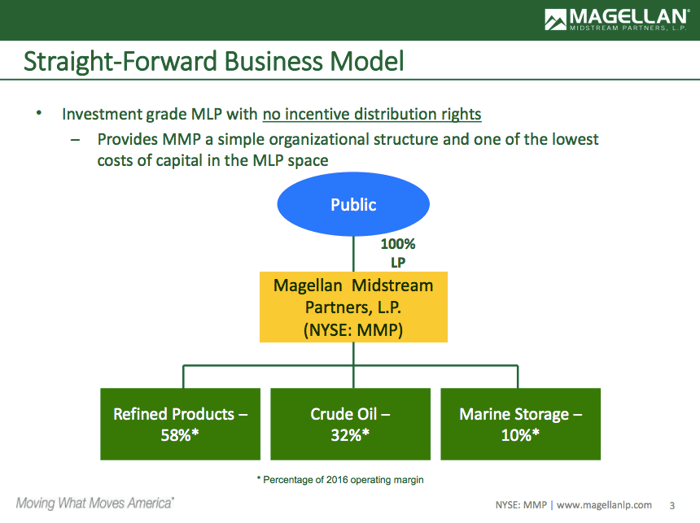 Magellan has no general partner to add costs or to sell its assets. Image source: Magellan Midstream Partners, L.P.

However, it also means that there's no "parent" with a vested interest in selling Magellan assets to spur the partnership's growth. So Magellan needs to find acquisitions to buy or build out its system over time if it wants to grow. If you own or are interested in owning Magellan, you'll always want to watch its development pipeline and monitor its acquisition activity.

On that front, Magellan has roughly $1 billion of growth projects lined up for 2017 and 2018. It could add $500 million more to that list for 2018 or later, too. Management is also purportedly actively looking at acquisitions so near-term growth appears set. But these are issues you will always want to keep an eye on. 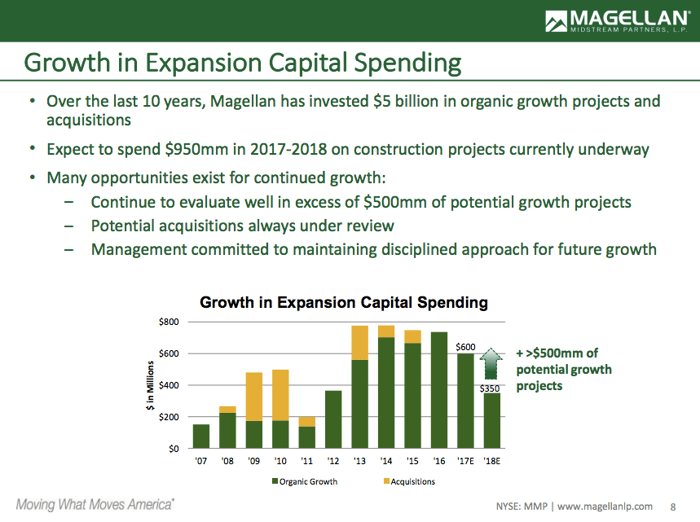 Magellan has the next couple of years of growth lined up already.  Image source: Magellan Midstream Partners, L.P.

One other factor worth noting is that, without a general partner, Magellan is effectively an independent service provider. That's good because it can ink deals with anyone who needs oil, gas, or refined products moved or stored. However, it also means it doesn't have a built-in customer lined up. That's not good or bad, but it's something to keep in mind.

From a big-picture perspective, Magellan is just another midstream partnership, but there are subtle nuances to understand. No general partner and a heavily fee-based business are two very important facts that have a ripple effect on the business, and they help to separate it from competitors. Now that you understand some of the facts that underpin Magellan's business -- and the 17 years of annual distribution hikes -- perhaps you'll be able to make more informed choices.