Please ensure Javascript is enabled for purposes of website accessibility
Log In Help Join The Motley Fool
Free Article Join Over 1 Million Premium Members And Get More In-Depth Stock Guidance and Research
By Matthew DiLallo - May 30, 2017 at 8:56AM

Owning real estate is a great way to generate passive income for retirement. And, this real estate giant just might be the best way to do it.

If there's one thing retirees crave, it's a stable source of income that they can count on to last through retirement. While many turn to annuities or bonds to generate a steady income stream, neither solves one of retirement's most pressing problems: inflation. That's why investing in real estate is a great option for retirees because it not only can provide steady income from the rents collected but upside from both rising rental payments and appreciating property values, which often outpaces inflation, enabling investors to more than offset its effect.

While investors have plenty of real estate options to choose from, including directly purchasing a property and renting it out, one that I believe is ideal for retirees is Brookfield Property Partners (BPY). That's because the real estate partnership offers broad diversification across all the top real estate classes, which when combined with its other characteristics makes it an excellent investment for the long haul. 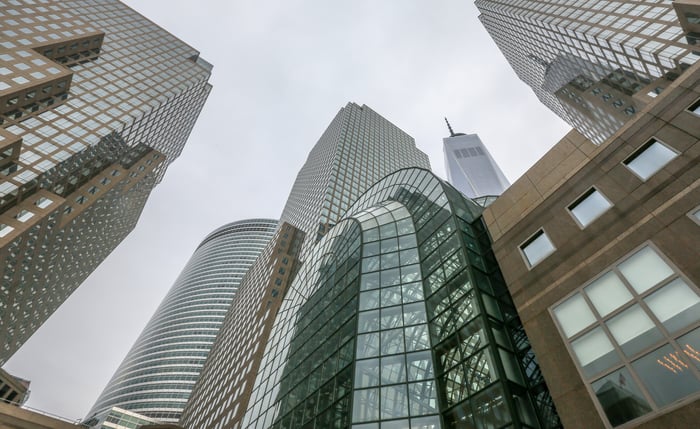 Leading global alternative asset manager Brookfield Asset Management (BAM 4.59%) created Brookfield Property Partners in 2013 as the primary public platform to drive its global real estate strategy. In doing so, it created an owner, developer, and operator of a world class real estate portfolio. At the core of those holdings is an office property platform that's second to none, consisting of iconic assets in top global markets such as London, Sydney, Toronto, and New York City that Brookfield often acquired during market downturns at a significant discount to replacement cost. These highly desirable locations attract quality tenants that have currently leased 92% of its available office space for an average term of eight years. What's worth noting for retirees is that those contracts contain inflation escalators that will combat its impact.

The second leg of Brookfield's core portfolio is retail, which consists of its 34% stake in leading mall owner General Growth Properties (NYSE: GGP) that it initially acquired out of bankruptcy during the financial crisis. While there has been lots of recent talk about the death of the mall, GGP owns top-tier malls in many of the country's best retail markets. Because of that, its same-store occupancy has hovered around 95% since these are some of the most highly trafficked retail spaces in the country that deliver strong sales per square foot. In fact, its malls are so productive that GGP is often able to convert locations recaptured from struggling retailers into higher value spaces by reconfiguring them into dining, entertainment, and fitness venues.

One of the hallmarks of Brookfield is the lengths it goes to mitigate risk. For example, it employs a very conservative financial management strategy, built upon maintaining an investment-grade credit rating and keeping a low leverage ratio of 50% debt-to-capital. Further, the company primarily finances on the asset level, in local currencies, and uses non-recourse fixed-rate debt to help mute the impact of rising interest rates and foreign exchange fluctuations on cash flow. In fact, one of the company's recent focuses has been on reducing interest rate risk by locking in low fixed-rate debt, which has dropped its floating rate debt exposure from 38% down to its target of 25%. 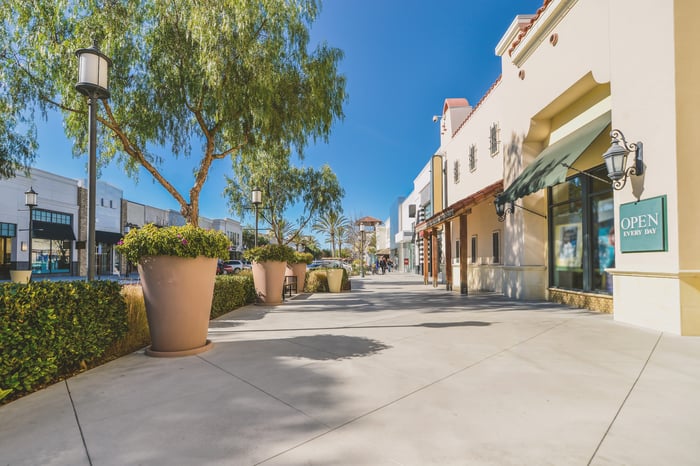 What's ahead for this real estate giant?

Brookfield Property Partners' diversified global property portfolio generates predictable cash flow each year. Its current policy is to return about 80% of annual funds from operations (FFO) to investors each year (it was at 82% in 2016) retaining the rest for tenant improvements. At that payout level and its current market price, the company has a pretty generous 5.3% yield. However, it's aiming to provide much more than just a bond-like high-yield to investors. One way it plans to do that is by steadily growing the payout each year at an average annual rate of 5% to 8% while maintaining that conservative 80% payout ratio.

Three factors should drive that growth: rising rents, reinvesting capital into higher returning assets, and its pipeline of development projects. Brookfield currently anticipates that rising rents due to inflation escalators, as well as its ability to capture higher market rates when leases expire, can deliver 2% to 3% growth annual in FFO per year, which should at least keep pace with inflation.

The second pillar of the company's growth platform is recycling capital by selling stabilized assets at premium prices and redeploying that cash into higher value assets. For example, during the first quarter, the company's opportunistic funds sold several stabilized multi-family and industrial assets, which gave it the cash to reinvest in properties with more upside potential such as self-storage and student housing. Another recent capital recycling example was the decision to sell its 51% stake in a core office property in Manhattan in a transaction that valued the property at $2.2 billion because the company "felt the capital could be deployed elsewhere at higher returns."

One place where it's reinvesting that cash is in its deployment pipeline because these projects have "significantly higher yields than the assets we are selling" according to the company. These development projects include $3.6 billion of new office buildings in places like New York and London that have an average yield on cost of 6% and a $2 billion investment in building an urban multi-family platform from scratch, which it anticipates will earn a 10% yield on cost. Once fully stabilized, these development projects should generate $320 million of annual net operating income for the company.

Overall, Brookfield Property Partners believes that its combination of growth initiatives can increase FFO by 8% to 11% annually through 2021, which fully supports its forecast that it can grow the distribution 5% to 8% annually over that same timeframe. To put those numbers into perspective, if the company hits the midpoint of its guidance, it should return around $7 per unit in cash to investors just in distributions over the next five years. On top of that, the increase in cash flow from its development projects, lease escalations, and reinvestments have the potential to create around $12 per unit in capital appreciation, which represents substantial upside to the current $22 price per unit. It's this combination of rising income with upside that makes Brookfield Property Partners a dream investment for retirees because it should generate inflation smashing returns.