Tucows' (NASDAQ:TCX) first-quarter earnings report featured an update on the company's acquisition of fellow domain provider eNom, plus commentary on how its mobile and internet service businesses are faring.

Judging just by the numbers, results didn't look so great. Revenue increased 55% to $69.6 million, but operating expenses grew even faster, pushing net income down 45% to $2.5 million. However, when you understand the basic strategy Tucows' management is pursuing -- building up the cash-cow domain business to fund larger growth opportunities in its other businesses -- things appear to be going according to plan, and a closer look at each individual segment provides a better way to evaluate the quarter.

The domain services segment, Tucows' largest by far, posted revenue of $50.5 million in the first quarter, an 82% increase from a year ago. And the $83.5 million acquisition of eNom -- which effectively doubled Tucows' number of domains under management -- is going to be like passing the proverbial pig through a python. The company noted that the integration of eNom is proceeding smoothly, though it will be one to two years before it can realize significant savings from synergies.

While the addition of eNom provided the largest contribution to top-line growth, it also significantly muddies a lot of Tucows' growth metrics for the remainder of 2017. Until Tucows works its way through an entire calendar year of integrated results, comparisons with the year-ago period will be largely meaningless. Additionally, acquisition-related accounting impacts to deferred revenue and adjusted EBITDA were complicated enough that CEO Elliot Noss plans to create a video to walk analysts and investors through all the details (which is not yet available).

While there is a lot of accounting noise this quarter, and I expect to spend much of my time in the next 90 days explaining it to our investors, the financial results were strong. And most importantly, our businesses are executing well. The eNom integration has gone very well this quarter, with the heaviest lifting on the operational integration and on converging their data behind us; with pleasant surprises on the people side and most importantly, with the business itself comfortably meeting expectations and holding some interesting opportunities that we had not counted on.

For the remainder of the year, it will be best for investors to focus on organic (excluding acquisitions) revenue growth (which, for the first quarter, was a respectable 11%), as well as management's 2017 guidance for adjusted EBITDA of $50 million -- a year-over-year increase of around 66%.

By continuing to grow the steadily profitable domain side of the company, Tucows seeks to increase the cash flows available to invest in its other, faster-growing businesses.

Revenue for the mobile services segment grew 11.5% in the first quarter to $18 million. Ting Mobile, which provides low-cost phone service without contracts, added 5,500 accounts and 12,000 devices in the quarter. Just as importantly, its churn rate was 2.27%, down from 2.4% last year. This was Ting's best quarter for net additions in a year. 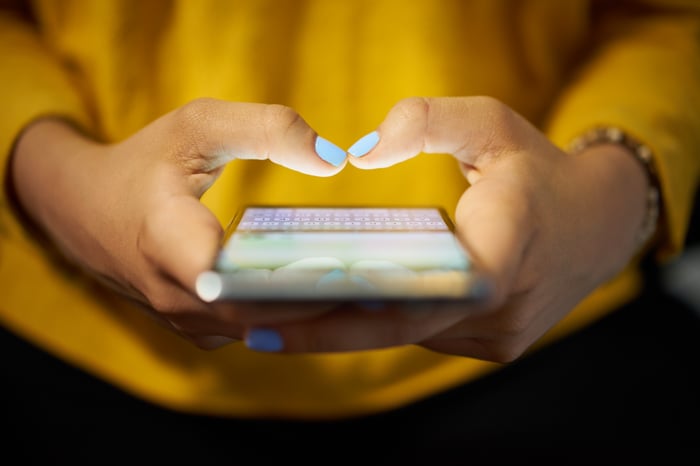 The company also came to an agreement with another operator called Ring Plus -- which shut down during the first quarter -- to migrate its customers to Ting. Out of 45,000 accounts migrated, 22,000 set up an account. Because the company still expects quite a bit of churn, these RingPlus accounts are excluded from the first-quarter numbers above, but Tucows ultimately expects somewhere between 5,000 and 7,000 of these accounts to remain longer-term Ting customers. Adding the RingPlus accounts brings Ting to a total of 175,000 accounts and 280,000 devices.

And finally, after five years of trying, Ting announced it has signed a carrier deal with Apple. Commenting on the importance of this, Noss stated:

Ting will now offer the iPhone with a Ting SIM right in the box, rather than sending folks elsewhere to try to find the appropriate model. Ting will always have the latest iPhone, the moment it is available for preorder. ... This deal will give our customers better phones, better purchase terms and protection for those phones, and better experiences activating and using those phones.

Slower activity from Ting Internet, but bigger things to come

Tucows' other strategic priority is the expansion of its Ting Internet fiber service. First-quarter revenue for this segment grew 25% to $1.14 million as Ting continued to build out its fiber network in the three towns where it's already broken ground. However, the company now expects 2017 capital expenditures to be less than its previous guidance of $30 million to $35 million, saying that working with municipal governments has gone slower than expected.

With plans to begin expansion to Sandpoint, Idaho, and Centennial, Colorado, later this year, these first five Ting towns will ultimately provide the company with 85,000 serviceable addresses. And the company continues to expect a 50% adoption rate within five years of launching in each community.

While the company says it will most likely announce two to three new fiber towns later this year, that estimate also came with a big disclaimer -- with Noss saying that they could announce anywhere from zero to five towns.

While Tucows' earnings can be tricky to follow due to its acquisitions and its multiple business segments, there's still plenty here to get excited about. Over the long term, the integration of eNom should substantially boost revenue and adjusted EBITDA, and the company says it remains on track to hit its target of $50 million in adjusted EBITDA for the year. Ting Mobile continues to generate solid organic growth. And while it's very early days for Ting Internet, the company remains committed to reinvesting its formidable cash flows in what could eventually be its largest growth engine.