Please ensure Javascript is enabled for purposes of website accessibility
Log In Help Join The Motley Fool
Free Article
Join Nearly 1 Million Premium Members And Get More In-Depth Stock Guidance and Research
By Neha Chamaria – Updated May 31, 2017 at 8:09AM

Royal Gold faces some risks that could hurt its growth prospects.

Royal Gold Inc. (RGLD -2.23%) is among the three well-known companies in the precious metals industry that are into the business of streaming and royalty; the other two being Wheaton Precious Metals (NYSE: WPM) and Franco-Nevada (FNV -2.79%). As a streaming company, Royal Gold doesn't own or operate mines -- it buys gold streams from other miners in return for upfront funding. Such a business can be lucrative for several reasons, as I highlighted in a recent article where I outlined 10 reasons to buy Royal Gold for the long term.

As you might've already guessed, I'm bullish about Royal Gold. But as with any other stock, there are risks associated with owning Royal Gold, some of which could hurt the company's growth prospects and turn the market sentiment bearish.

Currently, Royal Gold has interests in 38 operating mines, but only five of them accounted for as much as 72% of the company's total revenues last year. Those five mines are: 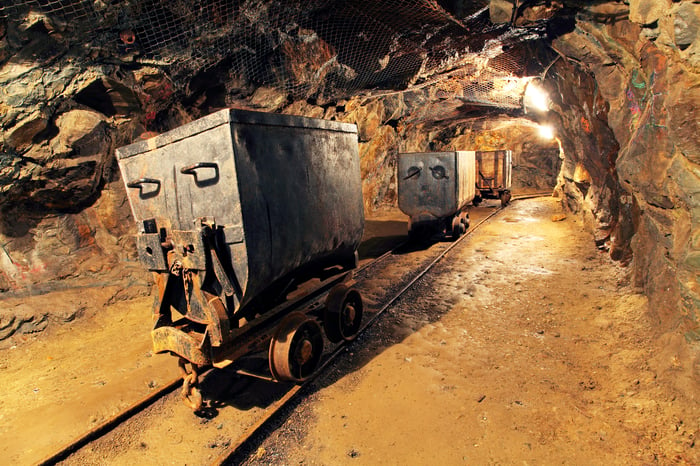 Interestingly Royal Gold acquired three of the above five streams -- Andacollo, Pueblo Viejo, and Wassa and Prestea -- only in the fiscal year 2016 (ended June 30, 2016), and if not for those acquisitions, Royal Gold's production in 2016 would've fallen off the cliff, especially since production from Penasquito was already under pressure. Royal Gold's gold deliveries from Penasquito slipped 21% in the fiscal year 2016 because of lower grades and recovery.

Production from Penasquito could remain under pressure for the next couple of years as mining will be restricted to lower-grade ore while Goldcorp expands the mine. While deliveries from other mines should be able to offset any declines, this highlights how dependable Royal Gold's fortune is on a handful of mines. Such dependability is risky, as any adverse development at any of the five mines could hurt Royal Gold's sales and profits substantially.

There's another problem Royal Gold faces: Some of its streaming and royalty agreements have conditions attached that would require the company to look for replacements to keep its sales going and costs under control. Some examples include the Pueblo Viejo mine and the Wassa and Prestea mine.

These are just two examples of the kind of limitations Royal Gold faces. The company is going great guns, reporting record revenues and cash flows, but it may not be able to continue doing so if it cannot add more streams to its portfolio before the expiry of existing ones, or keep a tight grip on costs to ensure that the higher later purchase costs (as agreed upon with miners) do not throttle its margins.

The risks Royal Gold faces, especially its heavy reliance on few mines, are real and hard to ignore. That said, these risks aren't an immediate threat to the company's operations, and its superior dividend track record and low volatility in cash flows versus rivals like Wheaton Precious Metals make Royal Gold one of the top stocks to invest in among not just the streaming companies, but in gold overall. Investors should just be aware of the kind of situations that could reverse Royal Gold's fortunes.