It's no secret that United Parcel Service, Inc (NYSE:UPS) and FedEx Corporation (NYSE:FDX) are key beneficiaries of the e-commerce revolution. While that's good news from a revenue growth perspective, it's not necessarily a good thing from a margin and cash flow perspective. Both companies are facing margin pressure from growing e-commerce deliveries, and UPS in particular is having to ramp up capital expenditures and costs in order to support future growth.

In this context, let's take a look at what's going on at UPS and how it affects the investment proposition.

Simply put, FedEx and UPS need to increase pricing in order to counter the effects of increased costs of servicing e-commerce growth, and also to influence customer behavior in order to optimize the profitability of e-commerce deliveries. Both companies have already taken substantive measures to do this.

As you can see below, the pricing actions led to an increase in UPS ground yield (revenue per piece), but ground volume growth slowed in the first quarter -- no matter that ground revenue growth of 4.7% was good. In short, the pricing actions haven't negatively impacted revenue growth. For reference, ground makes up more than 70% of total U.S. domestic package revenue, and around 45% of total company revenue. 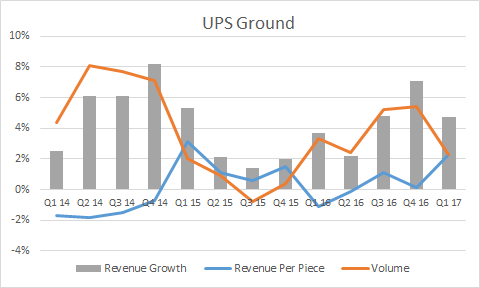 While pricing seems fine, margin in the U.S. domestic package segment has been under pressure. As the following chart demonstrates, operating income margin has declined on a year-over-year basis for the last three quarters. 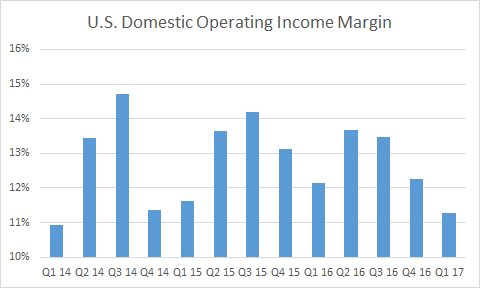 The subject came up on the first-quarter earnings call with CFO Richard Peretz, who said, "When we put the year together, we do see an improvement in margin. We see leverage coming. We did know the first quarter, you would have more of the start-up costs. But we also understand that through the year, we're investing to create the network and transform it and we're going to see that happening through the year, but we're also going to see revenue coming in to offset it."

In other words, he's hoping that the extra investments made recently -- which have crimped margin in the near term -- will result in extra revenue coming through and margin expansion later in the year, something to look out for.

Regarding the extra investments, it's clear that UPS has a lot of work to do. The need to service burgeoning e-commerce growth has forced FedEx and UPS to increase investment in their networks. Peretz plans to ramp up capital expenditures to levels higher than they "have been, say, the last six or seven years." 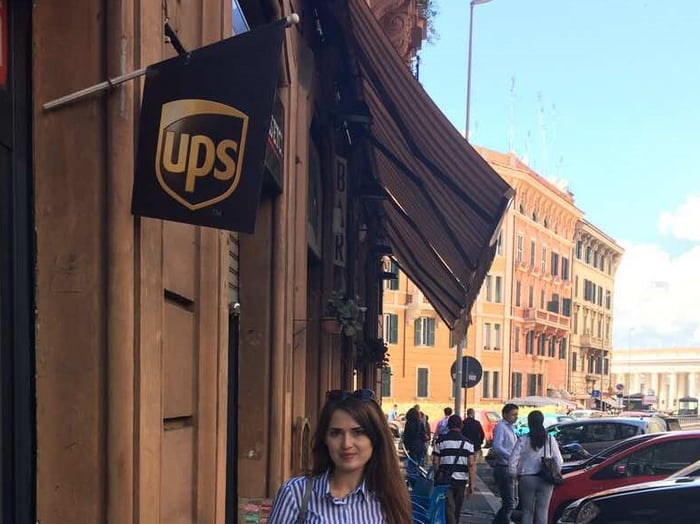 In fact, CEO David Abney began the first-quarter earnings call by outlining that UPS was "stepping up the pace of investments now to enable UPS to better participate in the vast opportunities we see ahead."

Despite the disappointing performance in the first quarter, management maintained its full-year 2017 guidance. Peretz pointed out that "Our current momentum, combined with accelerated investment initiatives, gives us confidence in our ability to attain our full-year guidance."

In other words, management believes it will hit its full-year adjusted diluted EPS guidance range of $5.80 to $6.10, partly due to the increased investments that reduced margin in the first quarter.

What should investors make of it?

There's nothing wrong with a company increasing investments, provided it ultimately delivers on its earnings expectations. However, in recent history UPS has disappointed investors by having to ramp up capital expenditures more than originally planned -- suggesting that management is reacting to burgeoning e-commerce growth rather than getting out ahead of events. All of which suggests that investors would have reason for concern about UPS hitting its targets.

On a more positive note, UPS and FedEx are both taking initiatives to increase pricing and influence e-commerce customer behavior, and it seems to be working from a revenue perspective. However, going forward the key tests will be whether revenue increases as expected and leads to the margin leverage that Peretz expects will happen later in the year. Time will tell.