Shares of Michael Kors (CPRI -0.57%) fell nearly 9% on May 31, after the fashion house's fourth quarter earnings beat was overshadowed by a miss in comparable store sales growth and dismal guidance for the first quarter.

Kors' revenue fell 12% annually to $1.06 billion, marking its third straight quarter of year-over-year declines, but nonetheless beating estimates by $10 million. Its adjusted EPS of $0.73 topped estimates by three cents, but that still marked a 26% drop from the prior year quarter. 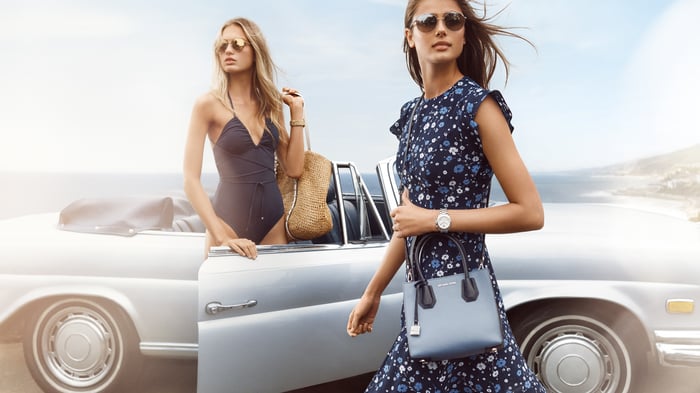 However, Kors' comps fell 13.6%, compared to the 12.3% drop which analysts had expected. It also expects its first quarter sales to fall 6%-8% annually, versus Wall Street's expectations for a 4% decline. Those problems knocked Kors down to a five-year low, and the stock now trades at about 8 times earnings -- which is much lower than the industry average of 22 for apparel makers.

Those facts might convince some daring investors to buy Kors as a potential turnaround play. But if we examine five key problems with the company, we'll notice that it's probably a better idea to sell Kors instead.

Kors had 827 retail locations as of April 1. Looking ahead, the company plans to shutter 100 to 125 locations within the next two years to generate $60 million in ongoing annual savings. However, that plan will first result in a one-time charge of up to $125 million. Closing stores makes sense when comps and profit growth are sagging, but it also reduces Kors' brand presence in a market which is saturated with affordable luxury competitors.

The combined scale and marketing muscle of Coach and Kate could also cause fickle consumers to forget about Kors. In the past, both Coach and Kors were rumored suitors of Kate Spade. If Kors had acquired Kate Spade instead, it would have overtaken Coach in annual revenues and gained an additional brand to offset the weaknesses of its core products.

3. Interest in the Kors brand is fading

The Kors brand probably wouldn't be as well known today if Michael Kors -- the company' honorary chairman, chief creative officer, and director -- hadn't become a household name as a judge on Project Runway. However, Kors left the show after its tenth season in 2012, and Google Trends indicates that interest in the brand clearly peaked in late 2014. 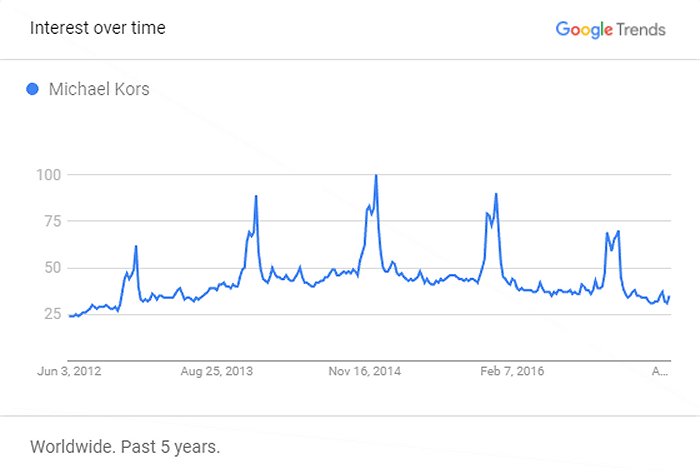 Amid this decline, Kors CEO John Idol believes that cutting promotional activities will protect the value of its brand. That strategy might have worked back in 2014 or 2015, but it's unlikely to work today as interest in the brand fades.

When a company's high growth era ends, it's usually wise to start paying a dividend to keep investors interested. After all, Kors has low levels of short-term debt, no long-term debt, and its free cash flow has consistently risen since its IPO in late 2011. 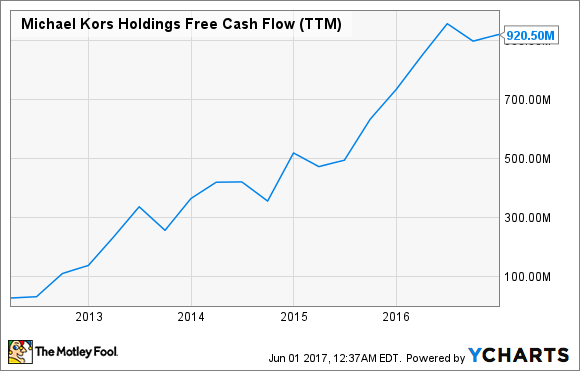 Coach and LVMH, which have both been posting better sales growth than Kors in recent quarters, pay respective yields of 2.9% and 2.6%. If Kors offers a comparable yield to complement its single-digit P/E ratio, it could set a floor under the stock -- but the company has given no indications that it ever plans to do so.

At this point, Kors should simply stop buying back stock. Yet Kors authorized another $1 billion buyback plan on May 25 -- which tells investors that the management still doesn't see the more obvious uses for its cash.

I believe that Kors' management is making timid moves which won't help it gain ground in the brutal retail and affordable luxury markets. Unless Kors gets more aggressive with acquisitions, new hires, and dividend payments, I believe that the stock could still have plenty of room to fall.