As General Motors' (NYSE:GM) new, all-electric Chevrolet Bolt makes it to more dealerships, deliveries of the important car continued to increase in May. Monthly Bolt deliveries were at an all-time high, and up about 21% from April.

Increasing deliveries of the Bolt reflect greater availability as the vehicle's national rollout continues. But if management is right about the electric car's potential, this is just the beginning for the Bolt EV. 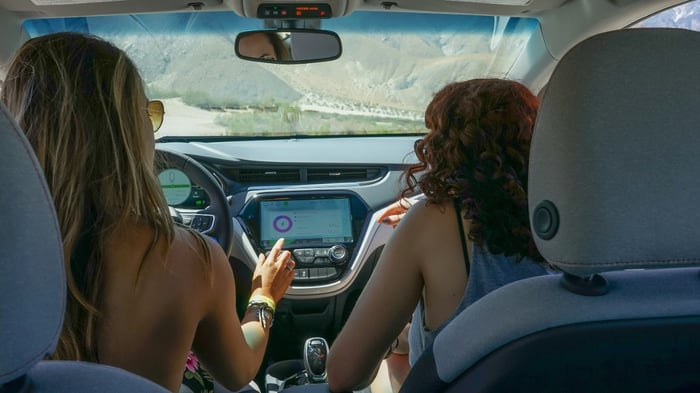 Hitting the market for the first time last December, there's good reason for investors to watch GM's Bolt deliveries closely. With 238 miles of all-electric range and a starting price of $37,500, the Bolt is the world's first mass-market priced, long-range electric vehicle. Even more, its price and range put it squarely in the same category as Tesla's (NASDAQ:TSLA) highly anticipated Model 3, which has impressively garnered about 400,000 deposit-backed reservations -- reservations that Tesla says are increasing every week.

In May, GM delivered 1,566 Bolts, up from 1,292 in April and 978 in March. The jump in Bolt deliveries makes for the second month in a row in which the company achieved record monthly figures. The upward trend for deliveries is a welcome change after deliveries pulled back in February and March, from a previous high of 1,162 set in January. 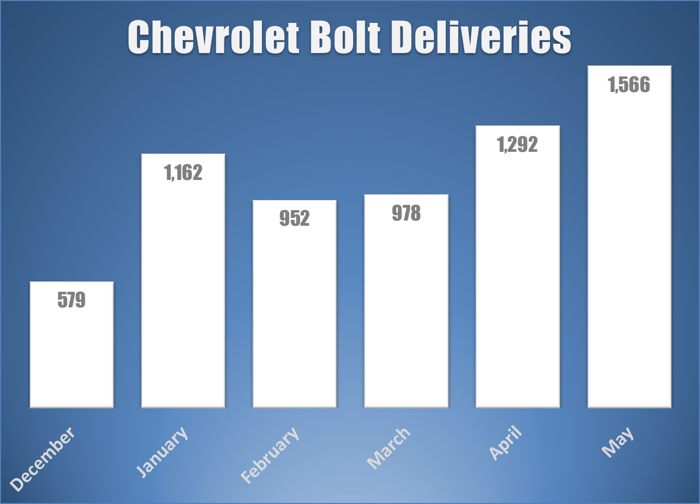 The Bolt's May deliveries put total year-to-date deliveries for the vehicle at 5,950. While this is quite a small number considering Tesla is selling around 25,000 electric vehicles a quarter (split roughly between its sedan and SUV) at more than twice the average selling price of the Bolt, investors should realize the Bolt is still early in its production ramp. In fact, GM management emphasized early on that the vehicle wouldn't see nationwide availability until the second half of 2017. Further, GM executives have indicated the vehicle program is only intended to produce around 25,000 to 30,000 Bolts annually, according to Reuters.

May Bolt deliveries likely benefited from GM's ongoing rollout to new markets in the U.S. Before May, the Bolt was only available in eight states. But the Bolt launched in eight new states in May.

Going forward, GM is bringing the Bolt to Arizona, Florida, Illinois, and Pennsylvania in July, Texas in August, and nationwide in September.

Notably, month-to-month variations in Bolt deliveries remain immaterial to GM's overall results. GM's 1,566 Bolt deliveries in May represented just 0.6% of its total 237,364 deliveries for the month.

But this doesn't mean investors shouldn't continue to keep their eye on the Bolt, as well as any other fully electric vehicles GM brings to market in 2017 or beyond. Tesla has already proven there's a significant consumer appetite for compelling, mass-market priced fully electric vehicles by garnering reservations in the hundreds of thousands for its July slated $35,000 Model 3.

Going forward, investors should watch Bolt deliveries, particularly as the Model 3 comes to market in July. Will the Bolt prove to be a compelling alternative to Model 3, or could Tesla's Model 3 put a ceiling on customer interest for GM's important vehicle?

GM seems to still believe the Bolt is going to make a dent, as the company said in in its May sales update that the Bolt is a "game-changing" vehicle.