What do Cracker Barrel, Flowers Foods, and NetApp have in common? That's right; all three hiked their payouts last week.

Since we're drifting away from the latest earnings season, we're entering a theoretically fallow period for dividend raises (which tend to occur more or less around quarterly releases). But this year has been full to the brim with payout hikes, and as such it's not conforming to the tradition.

Case in point: last week, in which (by my count) 15 companies increased their dividends. Here's a bit more detail about a trio of those lifts. 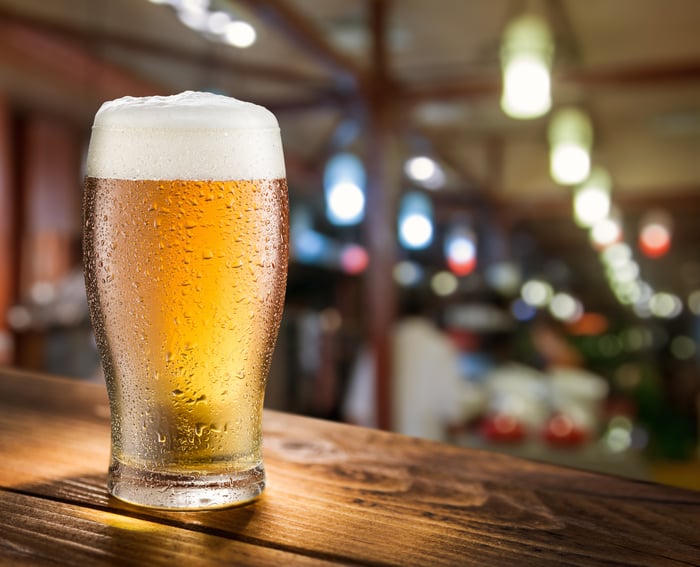 In spite of a dip in same-store sales and flat revenue growth (to $700 million), Q3 adjusted net profit rose a healthy 7% on a year-over-year basis to almost $47 million ($1.95 per diluted share), convincingly beating estimates. That was attributable to a decline in input prices, and cost-cutting measures. On the back of that, the restaurant operator also lifted its per-share estimate for the full year to $8.25 to $8.35, exceeding the average analyst projection of $8.23.

Cracker Barrel's improved profitability should have a positive impact on its cash flow, which in the recent past has been somewhat erratic. In certain years the company spends in excess of its free cash flow on dividends, while in other years it has enough to cover the payout. That's a bit too much of a rollercoaster situation for my taste, but income investors with some appetite for risk might find the stock appealing nevertheless. 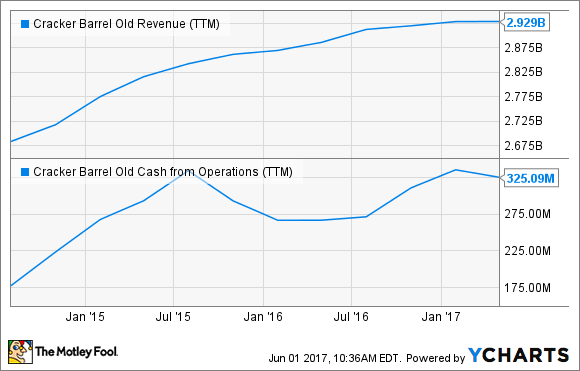 Cracker Barrel's next regular dividend is to be paid on Aug. 4 to stockholders of record as of July 14. At the current share price, it would yield 2.9%. That's well higher than the 1.9% average of dividend-paying stocks on the S&P 500.

The company's special dividend is to be dispensed on July 28 to investors of record as of July 14.

Elsewhere in the comestibles industry, Flowers Foods (FLO -0.25%) -- maker of such grocery store mainstays as Tastykake snacks and Wonder Bread -- has upped its quarterly dividend by $0.01 (or 6%) to $0.17 per share.

That was a recent piece of good news for the company. Slightly less encouraging was its Q1 results, which showed declines in both sales and net income. The former slipped by 1% on a year-over-year basis to nearly $1.19 billion, while adjusted bottom line slipped by 11% to just under $53 million. The sales figure came in just under the average analyst estimate, while profitability broadly matched expectations.

This, despite the continued implementation of Flowers Foods' Project Centennial, a strategy aimed at shifting its approach to sales -- what CEO Allan Shiver described in a conference call with analysts earlier this year as "shifting our focus from growth by geographic expansion to grow through brands" -- and cutting costs.

Despite the not-particularly encouraging recent results, the company is doing a good job making sure its dividend payouts and stock buybacks are covered by available free cash flow. Although FCF has slipped lately on a trailing 12-month basis, it should remain sufficient for both purposes even if sales and profitability are nothing to sing about. 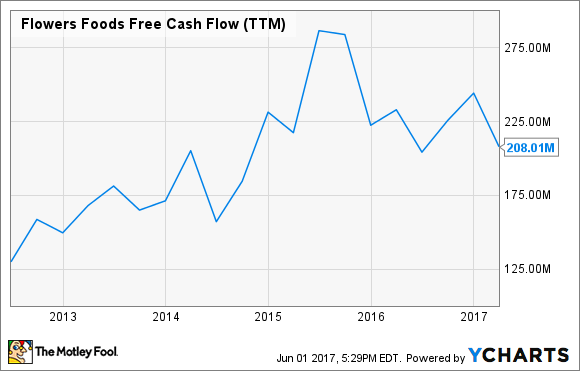 Flowers Foods' upcoming payout will be handed out on June 23 to shareholders of record as of June 9. It would yield 3.6%.

Data storage specialist NetApp (NTAP -2.07%) has elected to hike its quarterly distribution by 5%. The new dividend will amount to $0.20 per share.

NetApp introduced its payout just over four years ago. Since then, it has risen from $0.15 per share to the present level.

NetApp has also managed to beat analyst estimates for profitability on a fairly reliable basis lately. The latest win was the company's Q4 of fiscal 2017, in which it managed to boost its top line by 7% on a year-over-year basis to $1.48 billion (also exceeding analyst estimates), while its adjusted net profit ballooned by 52% to $239 million. The company's expansion in higher-margin areas such as the flash array segment is a key reason for the bottom-line bulge, and should continue to help profitability.

Now that the books are closed on NetApp's fiscal year, we can see that the company's free cash flow was relatively stagnant ($811 million, vs. $814 million for 2016). Slightly more than that amount was spent on dividend payouts and net stock buybacks. Spending above its means is a company habit dating back to the dawn of its dividend. Although I like the company's prospects and think it's generally well managed, if I were a shareholder I'd be concerned about this spendthrift tendency. 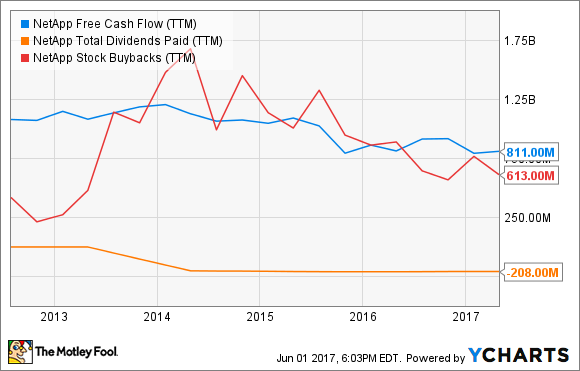 NetApp's next dividend is to be paid on July 26 to stockholders of record as of July 7. At the most recent closing stock price, it would yield just over 2%.

Cracker Barrel Old Country Store Actually Gained 13.5% in the Second Half of 2022. Is the Worst Over?