The apparel-maker's stock jumped after its first report as a publicly traded company.

Shares of Canada Goose Holdings Inc. (GOOS 0.96%) were soaring today after the down-jacket maker topped estimates in its first report as a publicly traded company. As of 3:28 p.m. EDT, the stock was up 15.3%. 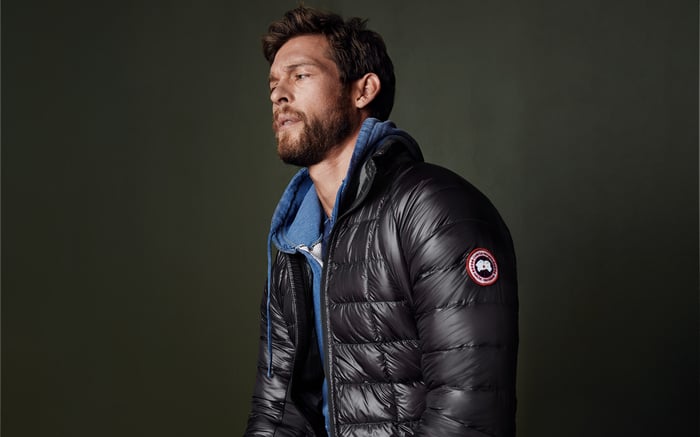 In its fourth-quarter report, the clothing maker said that sales increased 21.9%, to $51.1 million Canadian in the seasonally slow quarter, which was much better than expectations at $31.1 million Canadian. On the bottom line, it posted an adjusted net loss of -$0.15 Canadian per share, worse than the -$0.09 Canadian per share it posted a year ago. However, that also beat expectations at -$0.20 Canadian a share.

Direct-to-consumer revenue nearly tripled in the period, to $36.5 million Canadian, as the company stepped up its focus on e-commerce and its own stores.

CEO Dani Reiss called the performance "a strong finish to an excellent year of growth," citing the successful opening of the company's first two flagship stores in Toronto and New York, as well as the IPO. Reiss also noted that revenue in the fourth quarter was negatively impacted by the shifting of wholesale revenue to the third quarter.

Looking ahead, management called for revenue growth in the mid-to-high teens, which it said was consistent with its long-term trajectory. Analysts had been calling for sales growth of 19.2%.

It also projected adjusted earnings-per-share growth over the next three years of 20% annually, which compares to analyst expectations of 25% growth next year.

Canada Goose's results and forecast were encouraging, but the bigger question for the company is if its brand can continue to remain fashionable, especially since much of the apparel-retail industry is struggling. If management can execute on its long-term guidance, the stock should continue to move higher. Given the challenges in the retail industry and the fickleness of fashion, continued strong growth may not be so easy.