The leading theme-park operator rolls out a premium-priced parking offering at Disney Springs.

Guests can now pay $10 to leave their cars in designated preferred parking spaces in the Lemon and Grapefruit lots. Most of the parking at Disney Springs remains free, and it remains to be seen why one would pay more for an uncovered spot that isn't necessarily closer to the action than the massive Lime and Orange parking garages, which remain free. Outside of the ease of leaving Disney Springs when a major event lets out, it seems to be an odd outlet for monetization. 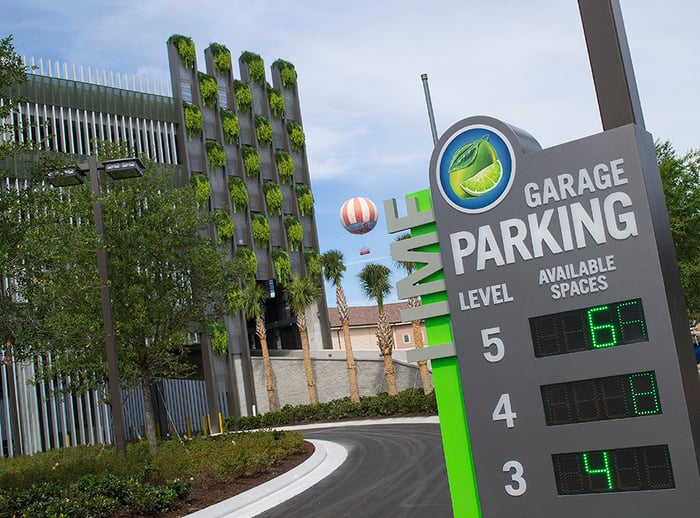 Starting 6/1, purchase preferred parking for only $10 in the Lemon or Grapefruit lots conveniently located near West Side or Marketplace! pic.twitter.com/RDdLHzWFov

Disney Springs has offered valet parking -- now priced at $20 -- for years, but that's a service that customers expect to pay up for. Trying to upsell spaces that are arguably preferred is a first for Disney, and one that will naturally lead folks to wonder if this is the first step before charging everyone to park at the complex. Disney isn't likely to go that route; there are too many shopping centers that have buckled under the weight of charging customers to pay to park. However, it's clear that Disney is leaning on preferred parking as a way to milk more money out of its guests.

Disney World introduced preferred parking at its theme parks a little over a year ago. Drivers were given the option of paying $35 per vehicle for spaces closer to the park entrances, a $15 premium to the standard $20 parking fee. The preferred spaces were initially offered at Disney's Magic Kingdom and EPCOT, but the rate was eventually bumped to $40 with preferred lots at all four Disney World theme parks. Disney's water parks continue to offer free parking, though fans of Blizzard Beach and Typhoon Lagoon may want to keep a close eye on the Disney Springs premium-parking move.

Introducing preferred parking makes sense at the theme parks where Disney World's two biggest rivals have offered a premium tier for years. Rolling it out at a Disneyfied shopping mall could be dangerous.

Disney World struggled to draw guests last year with attendance down at all four of its theme parks, according to the industry-watching Themed Entertainment Association. Higher ticket prices, more restrictive annual passes, a dip in Latin American tourist visits, and a lack of new game-changing rides are the major culprits, but the preferred parking that began rolling out 15 months ago likely contributed to the perception that Disney vacations keep getting more expensive.

We'll see if the Disney Springs move sticks. Disney tweeted the preferred-lot availability five days ago from the official Disney Springs account, but it has yet to show up on the theme-park giant's website. Disney should've learned last year that nickel-and-diming has its limits, but apparently its bigger goal continues to be making more money off fewer people.