Please ensure Javascript is enabled for purposes of website accessibility
Log In Help Join The Motley Fool
Free Article Join Over 1 Million Premium Members And Get More In-Depth Stock Guidance and Research
By Timothy Green - Jun 6, 2017 at 9:00AM

Get some sun, but don't forget to pay attention to these three stocks.

With the official start of summer just two weeks away, it can be tempting to forget about the stock market. But there will still be plenty of news, so keen investors looking for solid investments should keep at least one eye on the market. Three stocks to pay attention to are Cloudera (CLDR), H&R Block (HRB 15.29%), and Micron Technology (MU 3.80%). Here's what you need to know.

Machine learning and analytics platform provider Cloudera will release its first quarterly report as a publicly traded company on June 8, after the market close. Cloudera is valued at nearly $3 billion, around 10 times its annual sales, so investors will be looking for impressive growth figures.

Cloudera fits the mold of a fast-growing software-as-a-service (SaaS) company. Revenue surged 57% in 2016 to $261 million, but the company remains unprofitable. On a GAAP basis, Cloudera posted a net loss of $187 million in 2016, spending $203 million on sales and marketing alone. The company also burned cash, with a free cash flow loss of $124 million.

The bottom line is moving in the right direction, with losses narrowing compared with 2015. But the first risk factor listed in Cloudera's S-1 filing is this: "We have a history of losses, and we may not become profitable in the future." That's common for money-losing SaaS companies, but it's a reminder that Cloudera's success is far from a sure thing. The company's guidance will give investors a good idea of whether its growth will be fast enough to justify its premium valuation.

Tax-preparation company H&R Block claimed in April that it won market share during tax season. Total U.S. returns declined by 0.8%, but do-it-yourself returns via H&R Block's software and website surged 6.8%. The company will report its full fourth-quarter results after the market close on June 13.

Competitor Intuit has already reported its results, posting 9% revenue growth in its consumer tax segment. That performance was driven by a 2% increase in federal return volume and a mix shift toward higher-end products. In the DIY category, H&R Block probably picked up some unit market share. One complication this year: Start-up Credit Karma began offering a completely free online tax filing service, with no strings attached and few limitations. This push toward completely free online tax prep could be a major problem for both Intuit and H&R Block in the coming years. 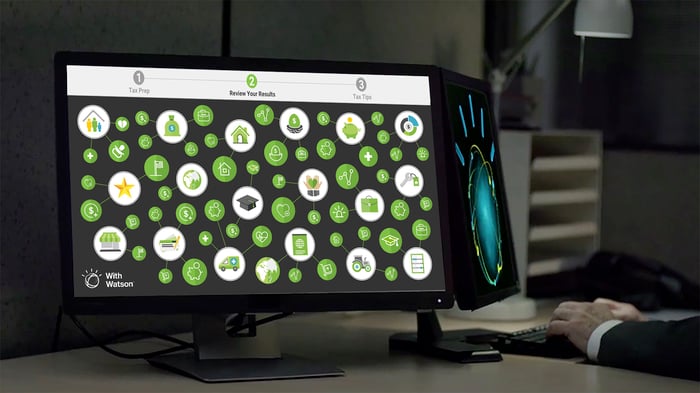 One thing H&R Block touted in its press release announcing its tax-season results was its use of IBM's Watson for assisted tax prep at its thousands of locations. H&R Block pointed to Watson, as well as aggressive promotional offerings, as the drivers behind its improved performance. Shares of H&R Block are down 28% over the past three years, but the stock could regain some ground if market share gains become the norm.

Memory-chip manufacturer Micron will report its third-quarter results after the market close on June 29. The company is enjoying a period of high prices and strong demand for its DRAM and NAND chips, an environment that has boosted revenue and profit in recent quarters. During the second quarter, the average selling price of DRAM chips surged 21%, while NAND bit sales volume rose 18%.

Analysts are expecting sales to soar 86% year over year during the third quarter, the result of both strong demand and an easy comparison. Adjusted EPS of $1.50 is expected, up from a loss of $0.08 during the prior-year period. Micron stock has surged as its financial results rapidly improved in recent quarters; the stock is up about 140% over the past year.

The memory-chip market is cyclical, and prices are determined by supply and demand. Those who bet on Micron during the good times in the past have gotten burned when memory-chip prices fell back to Earth. There's no telling how long this period of exceptional profitability will last, but investors can be sure that it won't last forever.

The Best Way to Do Your Taxes? Ask Watson!

More People are Filing Their Taxes Themselves, and That's Great for Intuit Inc.

How Intuit Could Outgrow ADP and H&R Block