Almost all the water utility stocks corrected in May, but this one corrected the most. Here's the likely reason.

Shares of York Water Company (YORW -1.60%) plummeted 11.7% in May, according to data from S&P Global Market Intelligence. Even with this drop, however, the central Pennsylvania water utility's stock has returned 20.8% over the one-year period through June 2.

For context, shares of the United States' largest and second-largest publicly traded water utilities, American Water Works and Aqua America, slid 2% and 1.2%, respectively, in May, and have returned 5% and 1.1% over the past year. The S&P 500 returned 1.4% in May and has returned 18.7% so far this year. 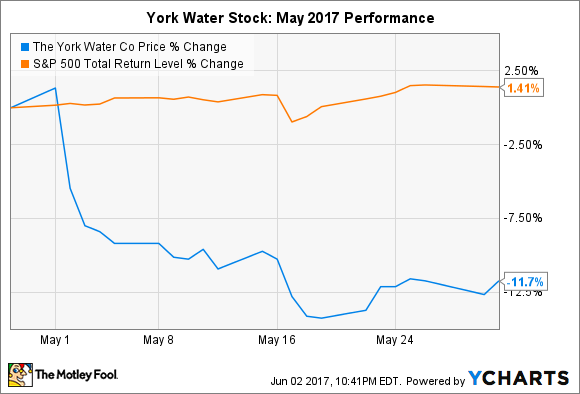 York Water stock's drop began in late April, and the company didn't report its first-quarter 2017 earnings until May 2, so the earnings release didn't precipitate the stock's decline. However, it's possible the release played a role. York's results were decent: Revenue was flat with the year-ago quarter, but earnings per share increased 5.3% to $0.20, which was slightly above the $0.19 Wall Street was expecting. That said, given the stock's recent valuation run-up, some investors might have wanted to see better results. 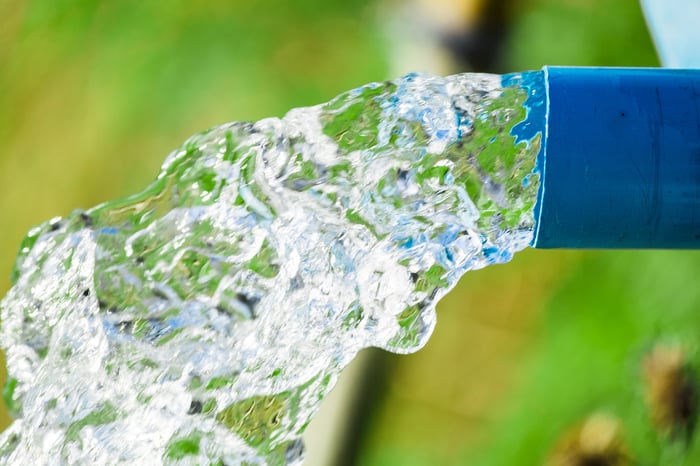 York Water did announce some not-so-good news about finding unacceptable lead levels in some of its customers' drinking water during routine testing, which it's addressing. However, this news was announced in the fall, so it doesn't appear related to May's stock price drop.

All of the stocks of water utility companies with market caps above $300 million, except for American States Water, declined in May. While York Water's stock dropped the most, its stock price also returned the most of the pure-play water utilities operating in the U.S. over the one-year period through January. Likewise, its valuation on a forward price-to-earnings basis had ballooned the most -- to 35.2, which is pricey for a stock that analysts expect to grow EPS an average of 4.9% per year over the next five years. So it seems likely York stock's May decline had much to do with water stocks' correcting after running up to seemingly unsustainable valuations.

Investors in York Water shouldn't change course because of the stock's drop in May. The stock's valuation simply appears to have gotten ahead of itself after its big price run-up in recent years.

This Is the Greatest Dividend Stock of All Time, and You've Probably Never Heard of It

The Greatest Dividend Stock That You've Never Heard Of