Powering these two tablets is a chip called the A10X Fusion. The chip, as is usual for Apple's A-series processors, is quite a powerhouse. 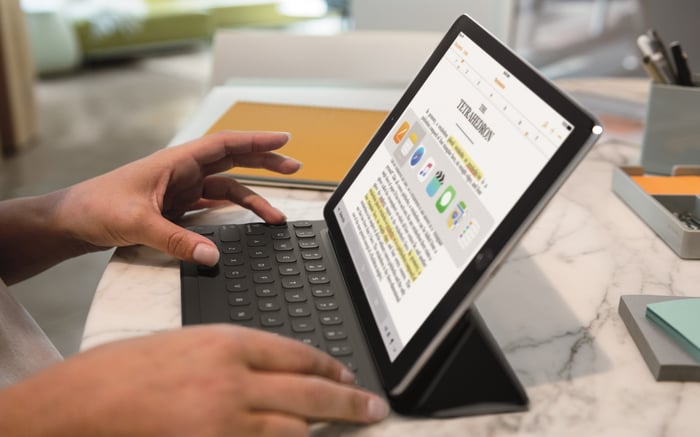 Let's take a closer look at what Apple has said about the chip, what it means for the latest iPad Pro models, and what the design decisions of the chip might tell us about Apple's thinking about future iPad Pro devices.

According to Apple, the A10X includes 12 graphics cores. The A10 boasts six graphics cores, so it looks as though the A10X is simply twice an A10 in this regard. Apple also claims that the A10X delivers 40% better graphics performance than the A9X (which also includes a 12-core graphics processor).

Sensible design decisions
The A10 does an excellent job of powering the iPhone 7 and iPhone 7 Plus and is easily one of the most, if not the most, robust smartphone chips in the market today.

Scaling the A10 up to build the A10X makes a lot of sense considering that a typical iPad Pro use cases are probably much more CPU and graphics intensive than typical iPhone 7/iPhone 7 Plus use cases.

It's little wonder, then, that the A10X is endowed with a substantially faster graphics processor than the one found in the standard A10.

Additionally, the iPad allows for much more aggressive multitasking than the iPhone does, and with the upcoming iOS 11 release, it seems that the iPad will gain even more robust multitasking capabilities. In support of the more robust capabilities of the iPad, it makes sense that Apple would add more processor cores to cope with the potentially increased workload.

Glimpsing the future of the iPad
Apple has made it quite plain that it wants the iPad to evolve beyond a simple content consumption device; it really seems to want the iPad to replace the traditional notebook for most users.

Like the A9X before it, the A10X is a serious chip that isn't just aiming to be a best-in-class tablet processor, but instead a best-in-class computer processor. Indeed, Apple makes a point to highlight in its marketing materials for the new iPad Pro models that they are "more powerful than most PC laptops."

Given what we know about the performance levels of the A9X and the A10, I have every reason to believe Apple's marketing claims. The coming years will show us if the iPad Pro can take a sizable bite out of the traditional notebook personal computer market.