This innovative new display has the potential to change the technology world as we know it.

If one thing seems clear in the world of technology, it's that organic light-emitting diodes (OLEDs) will play a central role in the future of electronics displays. Because OLEDs emit their own light and don't require a backlight, they are already impossibly thin, cool to the touch, and extremely durable. They also offer brilliant colors, superior brightness, and a nearly infinite contrast ratio, which is why OLED is already found in hundreds of millions of smartphones and tablets around the world. And down the road, they'll even be made foldable, rollable, and semi-transparent.

But perhaps most exciting, thanks to the innovative minds at Samsung (NASDAQOTH: SSNLF) Display, we can now add stretchable to that list. 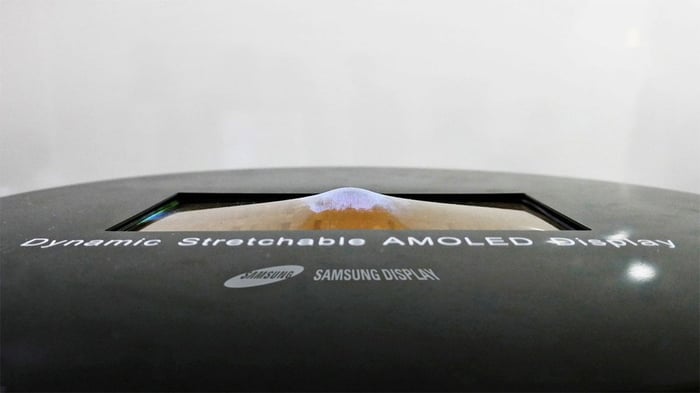 The next big thing in displays?

More specifically, the 9.1-inch screen can stretch 12 mm (or about a half an inch) in both concave and convex directions, and can maintain a "high degree" of resolution when doing so. By contrast, previous iterations of OLED displays could obviously be made flexible, but even then they maintained a noticeable level of rigidity and could only be bent in one direction.

To be fair, the 9.1-inch display is a prototype, so we shouldn't expect to see it on Samsung's smartphones, tablets, or smartwatches in the near future. But it's easy to see the applications of such a novel technology. Samsung, for its part, envisions the technology being used to enable new wearables, smartphone form factors, and even "AI applications" as it opens the door to more "complex curvature" options.

Of course, the most obvious application could lie with ultra-thin, ultra-durable stretchy smartphones and tablets -- or perhaps even a smartphone that could seamlessly stretch into a tablet. But we can also imagine such displays being built into your clothes for a high-tech wearable outfit, potentially similar to the ones Under Armour envisioned years ago. And they'd be a perfect fit to conform to more effective shapes to enable immersive virtual reality headsets, as opposed to the flat displays or distorting lenses utilized in many VR goggles today.

But that also raises the question: How long, exactly, will we have to wait for stretchable OLED technology to go mainstream? If Samsung's previous droolworthy OLED innovations are any indication, we have plenty of waiting to do.

Recall, for example, that I wrote about Samsung showcasing its secret foldable OLED smartphone for the first time in early 2014. Samsung has since renamed that initiative "Project Valley." And the most recent industry rumblings suggest that Samsung is planning a limited manufacturing run of just a few thousand of these foldable (not stretchable) smartphones later this year, with a goal of introducing a mass-produced version as early as 2019.

It will almost certainly be a number of years yet, then, before we see this newly introduced stretchable OLED technology find its way into a popular electronic device manufactured at any meaningful scale. But if Samsung Display wants to fundamentally change the way we think about display technology -- and that's something of which this particular tech is certainly capable -- it has to start somewhere. And I can't think of a better time than now.